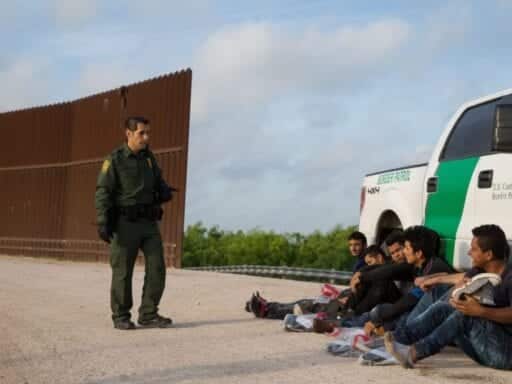 Share
Loading...
A Border Patrol agent apprehends illegal immigrants shortly after they crossed the border from Mexico into the United States on Monday, March 26, 2018 in the Rio Grande Valley Sector near McAllen, Texas.  | Loren Elliott/AFP/Getty Images

It raises concerns about privacy rights and the tests’ accuracy.

The Trump administration plans to vastly expand a program to collect DNA information from migrants in detention and enter it in a database designed to identify criminal suspects, under an upcoming rule from the Department of Justice.

Administration officials say the DNA tests are necessary to determine whether adult migrants and the children they travel with are genetically proven to be a family. They also say the testing is needed to enforce a 2005 law requiring DNA samples be taken from people in federal custody.

But privacy advocates have raised concerns about whether mass DNA testing violates immigrants’ privacy rights and whether the test results are reliable. The Electronic Frontier Foundation, a digital privacy group, called the plan “dystopian.”

Under the rule, officials would collect DNA samples from people in both US Customs and Border Protection and US Immigration and Customs Enforcement custody and then send those samples to an FBI lab for analysis.

The DNA information would then be transferred to the Federal Bureau of Investigation’s Combined DNA Index System, or CODIS, database, which is used to identify criminals across federal, state and local jurisdictions and missing or unidentified individuals, according to a senior Department of Homeland Security official.

It’s not clear whether unaccompanied migrant children or other categories of immigrants will be exempt, or who else will have the DNA data. A spokesperson for the DOJ did not immediately respond to requests for further information on the rule Wednesday.

The DNA Fingerprint Act of 2005 requires law enforcement to collect DNA from everyone who is arrested or detained in federal custody, except under limited exceptions. The Obama administration exempted individuals in immigration detention, an exception that then-DHS Secretary Janet Napolitano said at the time was meant to be temporary.

In August, a US Office of Special Counsel report cited whistleblower complaints that CBP has “for years failed to comply with a law mandating collection of DNA samples from detained criminal subjects.” As a result, the report said, people accused of violent crimes evaded capture for years, even though they had been detained by CBP and ICE and their DNA would have been on file if agencies had complied with the requirement.

Almost 458,000 families have been arrested at the border between October 2018 and August 2019. In May, ICE rolled out two DNA testing pilot programs — dubbed Operation Double Helix 1.0 and 2.0 — that used DNA tests to determine biological links between migrants who claimed to be family members.

To do so, the agency used rapid DNA testing, which allows officials to get results in under two hours and without having to send samples to a lab, but is significantly more expensive than other testing methods. Acting DHS Secretary Kevin McAleenan said in August that ICE found that 16 of the 84 claimed family connections in the first pilot, and 79 of 522 of those in the second test, were found to be fraudulent, meaning that genetic testing did not establish a parent-child relationship.

These tests are technically voluntary, but the consent forms provided to migrants “note that if families decide to opt out of the Rapid DNA testing, that could factor into a decision of whether or not to separate parent from child in immigration detention,” according to the Electronic Frontier Foundation.

Republican Sens. Marsha Blackburn of Tennessee and Joni Ernst of Iowa, however, have sought to make the testing mandatory for all immigrant family units.

The lack of a genetic connection could mean adults are traveling with children not their own in hopes of being treated more leniently by the immigration system. But “fraudulent” families could also include children traveling with adults who are related to them but are not their biological parents, such as a stepparent, aunt or uncle, foster parent, or adoptive parent or children who are traveling with their parents but are older than 18. It’s not clear which categories the adults in the pilot program belong to.

Family fraud appears to be statistically rare: According to the LA Times, fraudulent families represented about 1 percent of family units apprehended at the border in a one-year period. But McAleenan has cited these fraud cases as justification for the administration’s attempt to roll back protections in a decades-old court order known as the Flores settlement agreement, saying it’s an incentive for adults to travel with children who are not their own. (The agreement established baseline standards of care for migrant children in detention, including a 20-day limit on their detention.)

“No child should be a pawn in a scheme to manipulate our immigration system — which is why the new rule eliminates the incentive to exploit children as a free ticket to this country,” he said.

Ebola showed up in a war zone. It’s not going well.
Home, bittersweet home
Get ready for Halloween as the Vox Book Club reads Mexican Gothic
Pete Buttigieg is raising money from Silicon Valley’s billionaires — even as Elizabeth Warren attack...
The House just sent a major message about checking the president’s war powers on Iran
Greyhound will no longer consent to warrantless searches by border patrol agents