The US will admit just 18,000 refugees in the next year 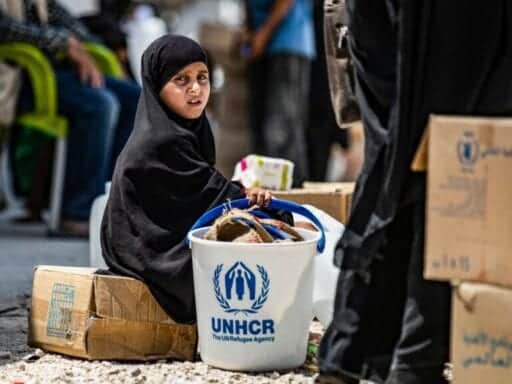 Share
Loading...
A girl sits next to packages of humanitarian aid at a camp for displaced people in northeastern Syria on July 22, 2019, as people collect UN-provided humanitarian aid packages. | DELIL SOULEIMAN/AFP/Getty Images

And it’s giving states and cities the option of refusing to take them.

The United States will accept fewer refugees over the coming year than ever: 18,000 at most, down from a cap of 110,000 just two years ago. And a new executive order from President Donald Trump will allow state and local authorities to block refugees from settling in their areas.

The administration announced Thursday that it will lower the annual cap on refugees to 18,000, from 30,000 this year, in the coming fiscal year, which starts October 1. And local governments that do not have the resources to support refugees in becoming “self-sufficient and free from long-term dependence on public assistance” will be able to turn them away.

Taken together, the reduction in refugee admissions and the new restrictions on where they may resettle represent another blow to the US’s ability to aid the world’s most vulnerable populations, even as the number of refugees worldwide has soared. The number of refugees worldwide approximately doubled between 2012 and 2018 to more than 20 million, according to the UN High Commissioner for Refugees.

The administration said the decision was necessary so it could focus on processing asylum seekers at the southern border. But a drastic cut to refugee admissions has been rumored for months, an idea reportedly embraced by Trump adviser Stephen Miller and other hard-line immigration restrictionists. (Asylum seekers apply for protections when they are already in the US, while refugees are processed by international organizations abroad and approved to come to the US ahead of time.)

The US will accept up to 5,000 refugees fleeing religious persecution, 4,000 Iraqis who assisted the US government or who have other American connections, and 1,500 from the Northern Triangle countries of Guatemala, El Salvador and Honduras. That leaves space for 7,500 other refugees, according to a senior administration official.

The State Department cautioned in a statement Thursday against viewing refugee admissions as the “singular measure of America’s humanitarian-based immigration efforts.” But for as long as the US’s refugee program has existed, it was the strongest worldwide — until Trump took office. The US has in past decades taken in more refugees than any other nation: about 3 million since 1980.

But the Trump administration has scaled back the US’s refugee program, lowering the cap on refugees admitted to the US from 110,000 in fiscal year 2017 to 30,000 in fiscal year 2019. That was, until Thursday, the lowest number since the Refugee Act was signed into law in 1980. The State Department’s Refugee Processing Center reported that 29,818 have been admitted his fiscal year as of September 20 and about 22,000 were admitted in 2018.

To implement Trump’s executive order, the State Department will work with non-governmental organizations already handling refugee resettlement to identify places that are able to absorb refugees, the senior official said. The executive order will not affect refugees who have already been resettled, they said.

The official said that the US’s first priority is aiding asylum seekers who are already in the US, as well as the estimated 350,000 expected to arrive in the coming fiscal year, by addressing a backlog of cases that recently topped 1 million. Allocating refugee slots specifically for the Northern Triangle will also encourage migrants to apply for refugee status rather than making the perilous journey north to claim asylum at the US southern border, they said.

The State Department echoed Trump’s concerns Thursday about prioritizing the crisis close to home over supporting refugees hailing from across the world.

“The current burden on the US immigration system must be alleviated before it is again possible to resettle large numbers of refugees,” the agency said. “Indeed, it would be irresponsible for the United States to go abroad seeking large numbers of refugees to resettle when the humanitarian and security crisis along the southern border already imposes an extraordinary burden on the US immigration system.”

US Citizenship and Immigration Services processes both refugees and asylum seekers, so it is possible that dealing with the crisis on the southern border has overwhelmed the agency’s resources. But Trump doesn’t appear to want to take in more asylum seekers — rather, he is trying to turn them away.

The Trump administration has reached agreements with Honduras, El Salvador, and Guatemala that would require migrants on their way to the US to seek protections in those countries first, effectively cutting off their access to the American asylum system before they even reach the southern border.

A separate Trump administration rule also prevents migrants from being granted asylum if they passed through any country other than their own before arriving in the US, effectively meaning asylum seekers from any country but Mexico will now be ineligible for asylum. (Some migrants would still be eligible for other protections that would allow them to stay in the US under that rule.)

Furthermore, the administration is also sending migrants who line up at a port of entry or who are arrested when trying to cross the southern border back to Mexico to await decisions on their asylum claims. Under the policy, which is known as “Remain in Mexico,” the US has returned more than 42,000 migrants to Mexico as of September 1, according to US Customs and Border Protection.

While Trump has tried to drive down the number of asylum seekers and refugees arriving in the US, some Democratic presidential candidates have proposed elevating the refugee cap as part of their immigration plans. Cory Booker and Julian Castro have proposed reverting to the pre-Trump refugee cap of 110,000, but Elizabeth Warren would go even further, setting the cap at 125,000 initially and increasing it to 175,000 by the end of her first term.

The death of the department store and the American middle class
Trump claims crime is up in US cities. The truth is more complicated.
Ethiopia’s unfolding humanitarian crisis, explained by a top aid official
Nunes keeps referring to the impeachment hearing as a “drug deal.” It’s not as clever as he thinks.
Tuesday’s DNC roll call was a quirky, unexpected delight
The debate over reopening America’s K-12 schools, explained