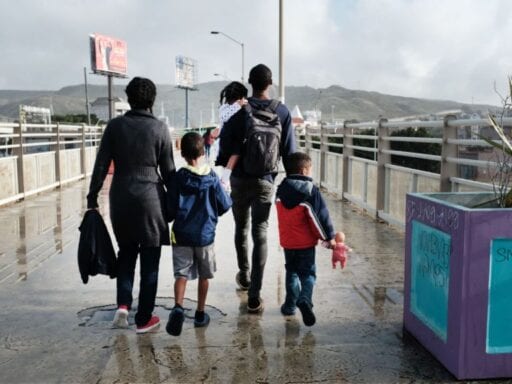 The new policy, forcing Central Americans to wait in Mexico while their cases are pending in the US, is starting at the biggest crossing along the US-Mexico border.

The Trump administration is about to implement its biggest change to asylum policy yet.

Starting on Friday, Central Americans who attempt to enter the US without papers at the port of entry at San Ysidro — the most popular official border crossing for migrants seeking asylum in the United States — are going to be turned back to Mexico while their cases are pending.

The shift was initially reported by Reuters, citing a Mexican official. A DHS official confirmed the plan to Vox.

The policy change means that people who are trying to exercise their legal right to seek asylum will be barred from the US for as much as a year while they wait for their claim to come before a judge. It is the most sweeping development in Trump’s ongoing crackdown on asylum seekers, who are largely from Central America, and disproportionately children and families.

The Trump administration announced its plans to implement the new policy, which it calls the “Migration Protection Protocols” but was known last fall as the “Remain in Mexico” agreement, in a House hearing in December. But its implementation was kept under wraps as the US continued to negotiate with the Mexican government, and as the government shutdown took attention in Washington.

While a DHS official confirmed some details of the plan to Vox, it’s still not clear how Mexico will deal with migrants while they wait for their court dates in the US.

The policy will almost certainly be subject to a federal lawsuit, as other Trump efforts to crack down on immigration without Congress have been. But it will go into effect (at least in San Ysidro) before any lawsuit is filed, and advocates tell Vox they may wait to see how it is being implemented before they sue to stop it.

And because of an ambiguous clause in the Immigration and Nationality Act, it’s entirely possible that the policy will be upheld in court.

How the new plan will work

Once on US soil, people have a legal right to seek asylum. That can happen whether they enter at a port of entry (an official border crossing) in full accordance with US law, or enter between ports of entry and are apprehended by Border Patrol agents — committing the misdemeanor of illegal entry.

Ultimately, the return policy will apply to both groups — those crossing illegally and legally. But the administration is initially rolling out the policy only at the San Ysidro port of entry — which means that some migrants entering legally will be subjected to it before those who enter illegally.

Furthermore, many of those migrants have already been waiting for months at San Ysidro to be admitted to the US, with an unofficial list kept by other asylum seekers responsible for determining whose turn is next.

A DHS official told Vox that starting on Friday, people who enter the San Ysidro port without papers will be screened as usual by CBP officers (who check migrants’ identities and perform medical screenings, among other tasks). Instead of being held in CBP custody and then transferred to ICE custody, however, the government will just give them a notice to appear before an immigration judge — skipping the step of an asylum screening interview — 45 days in the future.

When the court date arrives, the migrant will return to the port of entry and be escorted to an immigration courthouse in San Diego for the hearing, then returned to Mexico afterward for another wait before another hearing.

DHS anticipates that it will take multiple hearings to resolve a case, but is hoping that cases will be completed within a year.

If a migrant tells a US official that they fear persecution in Mexico, they’ll be given a modified asylum screening interview — using the higher standard of a “reasonable fear of persecution” than most asylum seekers are screened with. Migrants who pass that interview will be allowed to stay in the US.

This provision — which echoes statements from the Mexican government that they won’t allow anyone to return to Mexico who’s at risk of persecution there — is intended to address the biggest concern raised by human-rights groups about the policy: that Mexico is not necessarily a safe place for asylum seekers to be. The same week in December that Nielsen announced the policy, two teenagers from Honduras waiting to enter the United States and seek asylum were killed outside their shelter in Tijuana.

Tijuana is currently dealing with thousands of Central Americans — many from the “caravan” that arrived there last fall — waiting to be allowed to seek asylum in the US. Human-rights advocates and immigration lawyers have raised serious concerns about the conditions in which migrants are being held in Tijuana, including their physical safety in a shelter that is reportedly in a cartel-controlled neighborhood.

In recent weeks, the Mexican government has started implementing its own plan to deal with asylum seekers — giving them temporary visas upon entering Mexico and encouraging them to stay in the country and work. It’s not clear how that will intersect with the US’ new return policy, especially because Mexico is attempting to encourage settlement in the south of the country, while the US is requiring migrants to be in Tijuana every 45 days.

The Trump administration is used to policies being thwarted. This one might not be.

The policy relies on a provision in federal law that allows the US to return people who arrive in the US from “contiguous territories” back to those territories until their formal immigration court proceedings have been completed.

In the past, Mexico hasn’t allowed the US to use this provision to return Central Americans and other non-Mexicans to Mexican soil. Now, they have relented. The deal will not apply to Mexicans seeking asylum in the US from Mexico, but will apply to all other groups.

The administration was originally planning to issue a regulation — which would have gone into effect immediately — to formally implement the policy. It now appears that it is going to move forward without one, which could make the policy more legally vulnerable but could also make it harder to challenge.

There are big questions about whether the “contiguous countries” provision applies to asylum seekers. Many human rights advocates and immigration scholars claim it does not. But the provision is ambiguously worded enough that it’s not an open-and-shut case.

Furthermore, while some of the Trump administration’s changes to executive branch immigration policy have been challenged in court and shut down before going into effect, this one won’t be. It can’t be, because it’s going into effect tomorrow.

What’s next for #MeToo? This college might have the answer.
Netflix’s American Murder is mesmerizing even if you’re already familiar with the Watts murders
The best $20 I ever spent: My first tote bag
Breonna Taylor was killed by police in March. The officers involved have not been arrested.
America’s anti-democratic Senate, by the numbers
Georgia Republicans’ attempt to cancel a state court election, explained