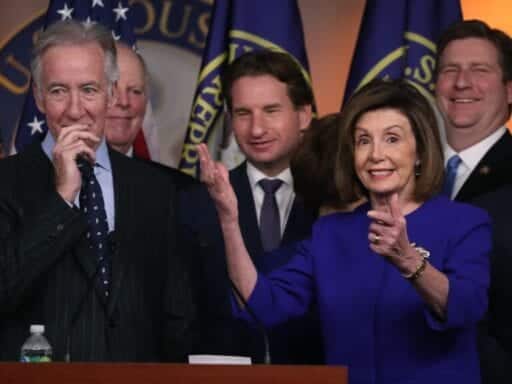 The House voted in favor of the new version of NAFTA after Democrats secured changes to labor and pharmaceuticals.

The House voted 385 to 41 to approve the USMCA, an updated version of the North American Free Trade Agreement, or NAFTA. A total of 193 Democrats backed the bill, after Democratic leaders in the House succeeded in winning changes on on labor, environment, enforcement, and pharmaceutical provisions. Those tweaks secured the backing of US labor, offering Democrats a pathway to supporting the agreement.

The approval of the USMCA comes a day after the House of Representatives impeached President Trump in a historic vote. The whiplash is remarkable: On Wednesday, House Democrats delivered the strongest rebuke possible to Trump. On Thursday, they delivered him one of the most high-profile bipartisan accomplishments of his presidency.

As strange as it may seem, this was partly strategic. Speaker of the House Nancy Pelosi has long argued that Democrats can “walk and chew gum” at the same time — investigating the president and pursuing impeachment without giving up their ability to legislate.

A lot of the work on reaching a consensus with the USMCA predated impeachment proceedings. Democrats have been actively working with Robert Lighthizer, the US Trade Representative, to win concessions on labor and the environment in the USMCA, and Lighthizer has always said he wanted to get bipartisan support for the Trump trade agenda, something which seemed near-impossible at the start of his tenure.

House Democratic leadership brushed off the timing when they announced the changes to the USMCA last week, but Democrats, particularly those representing swing districts, wanted a legislative accomplishment to bring home if some might be at risk by voting in favor of impeachment.

The USMCA was it, although it will also give Trump a boost heading into the 2020 election. In 2016, Trump promised to renegotiate NAFTA, which he called “the worst trade deal ever made.” He achieved this with the USMCA — even if he’s overselling just a bit. That hasn’t stopped the White House from calling it “the biggest and best trade agreement in the history of the world.”

Trump would probably describe the USMCA this way on the campaign trail whether it’s approved by Congress and not. At least now Democrats have won concessions.

Still, the USMCA is not a perfect deal. Environmental groups still say it doesn’t go far enough, and some unions are still opposed. But legislation rarely gets bipartisan support, particularly when it comes to trade.

The USMCA will move to the Senate, where Majority Leader Mitch McConnell (R-KY) has said lawmakers will consider it after Trump’s impeachment trial in January — though he said this before Pelosi suggested she might delay sending the articles to the Senate.

Even in the Senate, though, the bill is expected to get rare bipartisan backing. That support is expected from some unlikely corners, such as Ohio Democrat Sherrod Brown, who voted against the original NAFTA when he was a congressman.

What’s in the agreement

In October 2018, the US and Canada struck a last-minute deal for a revised NAFTA. The US and Mexico had come up with their own preliminary NAFTA deal, and the two had threatened to move ahead without Canada.

But Ottawa and Washington hammered out their disagreements on things like dairy and dispute resolutions, and the United States Mexico Canada Agreement (USMCA) was born. (Also known as CUSMA in the north or T-MEC in the south.)

“NAFTA 2.0” is an updated version of the nearly 25-year-old, trillion-dollar trade agreement, with major changes on cars and new policies on labor and environmental standards, intellectual property protections, and some digital trade provisions.

How the USMCA finally got passed

In the US, Congress soon welcomed a new Democratic majority in the House. And, early on, Democrats suggested the USMCA didn’t go far enough on labor and environmental provisions and enforcement.

The other major snag to ratification was Trump’s trade war, specifically steel and aluminum tariffs imposed on both Mexico and Canada. (Plus, those countries imposed retaliatory tariffs.)

The USMCA didn’t exempt Mexico or Canada from those tariffs, which both wanted gone. They did get the US to make a side agreement in USMCA that largely protects them from possible auto tariffs, but those on metals didn’t budge.

Trump almost derailed things once again, threatening Mexico with a ton of tariffs over the unrelated issue of immigration. Republicans objected, so did Mexico — and eventually Trump agreed to suspend those tariffs.

Mexico overwhelmingly ratified the USMCA soon after that, in June 2019. The country had also began the process of changing some of its laws to accommodate those new labor rules.

The drama again turned back to US domestic politics, where Democrats on Capitol Hill insisted on stronger enforcement of labor provisions in the USMCA, along with beefing up of environmental protections and drug provisions and enforcement.

In June, House Democrats formed a USMCA working group, to work with the administration on those demands. (As for Canada, it was mostly waiting for the US to get its act together before it took up the deal.)

The Democrats and the Trump administration largely remained at an impasse, and it soon turned into a talking point from Trump and his GOP allies, who accused the Democrats of holding up the trade deal.

According to some great reporting in Politico, all sides started to make some progress in the fall, though in fits and starts. Behind the scenes, Mexico, House Democrats, and Lighthizer were furiously trying to come to an agreement on tougher labor standards.

On the US side, Democrats wanted the support of unions — specifically Richard Trumka, president of the AFL-CIO, the largest federation of unions in the United States, who initially opposed the deal. All of this was happening as the House pursued impeachment against the president. It was no secret that Democrats in swing districts wanted to pass the USMCA.

In December, barely an hour after the House Democrats announced articles of impeachment against Trump, they also announced that they’d reached a new USMCA deal with the Trump administration. Trumka endorsed the revised version — the first trade deal the AFL-CIO has backed since a US-Jordan deal in 2001.

“There is no question, of course, that this trade agreement is much better than NAFTA,” House Speaker Nancy Pelosi said. “But in terms of our work here, it is infinitely better than what was initially proposed by the administration.”

That same day, Lighthizer flew to Mexico City to meet with his counterparts from Mexico and Canada to sign the modified USMCA.

Mexico gave up the most in this latest iteration of the USMCA, although the trade deal also means the most for the country. Mexico had already agreed to changes in its laws, but Democrats and labor unions wanted better enforcement mechanisms.

The updated USMCA will include this “rapid-response mechanism” that calls for an independent, three-person panel of multinational, independent experts who will make sure Mexico is abiding by its union rules and other protections.

These panels can request to visit sites, if there’s an allegation that the company is violating labor rules. The US will also dispatch labor attaché from its embassy to work with its Mexican counterparts to help them achieve the labor reform goals.

Shortly after Democrats announced the deal, Mexico started pushing back on the deal (though it had already approved the changes), claiming they’d been “blindsided” about US sending inspector to its factories.

The issue seemed to be those labor attachés (the US had initially wanted inspectors, but Mexico resisted), though Lighthizer responded to Mexico’s concerns by basically saying these attachés were their just to help Mexico with its labor rules, and wouldn’t be inspectors. That explanation seemed to satisfy Mexico, circumventing another last-minute hiccup.

Another big win for Democrats included the removal of a certain rule involving pharmaceuticals. The original USMCA extended the period that certain drugs (known as “biologics”) can be protected from generic competition to 10 years. Democrats objected to this provision, saying it could potentially thwart future efforts to lower the cost of some prescription drugs. That provision has now been totally removed from the USMCA.

Democrats also got some other wins, including stricter rules on steel that can be used in car production and the strengthening of state-to-state dispute settlements rules, which didn’t work very well under the original NAFTA.

They also beefed up some environmental provisions, including creating an interagency committee that will monitor environmental concerns in the three countries, and recommend enforcement actions — though it’s not clear what.

While these are slight improvements, green groups are saying they definitely don’t go far enough to address climate change or to effectively punish polluters. Many environmental organizations are still advocating against the bill, even with these updates.

So the USMCA definitely doesn’t satisfy everyone, and even some unions, such as the International Association of Machinists and Aerospace Workers, continue to oppose the deal.

The USMCA covers more than a trillion in trade, and having a set replacement for NAFTA will end uncertainty for businesses. According to the US government’s own economic assessment (which came out in April, before the new revisions) the benefits from the USMCA are modest: a .35 percent increase in GDP and just 176,000 jobs gained.

And even then, some of the consequences of the USMCA, are uncertain. Stricter labor standards are designed to de-incentivize manufacturers from seeking cheaper labour in Mexico, but it seems unlikely that jobs will be flooding back to the US.

The country of origin rules for automobiles might also make manufacturing cars more expensive, since it’s designed to stop factories from outsourcing for cheaper materials. Some factories may also decline to manufacture more parts in North America, and just pay the tariff, which is only 2.5 percent.

Or, companies might decide it’s just cheaper to make certain cars elsewhere — which may backfire. Either way, it could make some automobiles more expensive for consumers, too.

But the final vote showed that both Democrats and Republicans in the House are willing to accept this version of the USMCA. Now it heads to the Senate, where it’s likely to pass as well, although House members would probably prefer not to wait until 2020.

Canada also hasn’t ratified the deal yet, and likely won’t consider it until the new year. Prime Minister Justin Trudeau lost his parliamentary majority this fall, but still has power through a minority government. He might face a little more resistance in trying to get the legislation passed, but if the USMCA gets through Congress, Canada is likely to pass it, too.

The deep political meaning of a quarantine haircut
Vox Sentences: DACA on the docket
The Trump administration doesn’t yet have a plan to handle Grand Princess coronavirus cases, officia...
Apple’s attempts to limit data sharing on kids’ apps is negatively impacting PBS
Here are House Democrats’ next steps on impeachment
The Supreme Court has given trans people reason to hope again