The Village Voice has been shut down 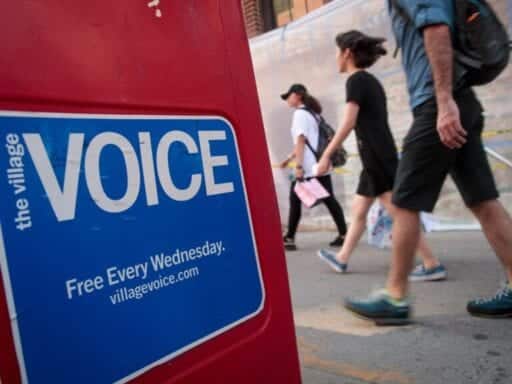 The loss of the legendary New York publication is a tragedy for local media, alt-weeklies, and criticism.

For 63 years, New York’s most venerated alt-weekly, the Village Voice, has been an institution — not just for the city but for several generations of writers and critics whose careers were launched or inspired by the groundbreaking writing on art and popular culture found in its pages.

On the Friday before Labor Day, Village Voice staffers found out the paper was being shut down. According to Gothamist, the paper’s owner, Peter Barbey, told the staff in a phone call that “due to the business realities, we’re going to stop publishing Village Voice new material.” Some staff members are being retained to “wind things down” and migrate the Voice’s archive online. The rest have been let go.

Barbey, a member of one of the wealthiest families in America, is currently the CEO and president of Reading Eagle Company, which also owns the Reading Eagle newspaper and the WEEU 830 AM radio station, both based in Reading, Pennsylvania. Barbey bought the paper in 2015 from Voice Media Group.

Almost exactly a year ago, on August 22, 2017, the paper announced that it would cease publishing a physical printed copy, which had for decades been available from ubiquitous red distribution boxes on New York’s street corners. The last printed issue of the Voice was dated September 21, 2017.

But apparently the move to digital wasn’t enough to save the publication.

Gothamist reported that Barbey told the staff, ”I bought the Village Voice to save it, this isn’t exactly how I thought it was going to end up. I’m still trying to save the Village Voice.” According to the Columbia Journalism Review, he also indicated that selling the paper wasn’t possible until this shutdown was made; why that would be case isn’t clear.

The Village Voice shutdown is another depressing example of the decimation of local and alternative media, in New York and nationwide

This is depressing news for media observers. The Village Voice’s shutdown comes on the heels of decreasing local news coverage in New York City: The Tronc-owned New York Daily News fired half its staff in July. Papers including the New York Times and the Wall Street Journal have drastically reduced their local coverage in the past two years, and the New York Observer ceased print publication in 2016 (though it continues to publish online).

The Village Voice often stepped up to fill the void, reporting on New York City’s news with a sensibility that felt more grounded in reality and deep knowledge of the city than some of its peers. With straphangers living through an especially bad stretch in MTA service over the past couple of years, for instance, the Voice’s subway coverage has been especially vital.

But it’s not just New York news that’s been suffering — alt-weeklies around the country have been in turmoil as well. The independent and often contrarian papers, vital launching pads for many writers, have been eulogized recently as they’ve been purchased by shadowy groups of investors (though in some cases, they’ve instead been purchased by folks who seem keen on supporting a mission over making money). In this case, despite Barbey’s claims that he wanted to save the Village Voice, the publication appears to be the latest casualty of the challenge and expense of producing high-quality local news.

For those who care about culture and the arts — and about the critics who write about them — the loss of the Village Voice is almost unspeakable. The Voice is one of the few papers left in New York City that has consistently covered local repertory cinema, art exhibitions, music, and more with wit, craft, and consistently high-quality writing.

For New Yorkers, losing the Village Voice means losing a vital lifeline to the city’s local culture and politics. For readers outside New York, it means losing an outlet known for some of the best writing and criticism around. To say it will be missed is an understatement.

Steve Mnuchin thinks the economy will bounce back in “months.” That’s very unlikely.
The battle to define the Biden economic team, explained
Culinary Union members seem to have broken from their leaders to back Sanders
Why the trapped Thai soccer team is in increasing trouble: they’re running out of oxygen
The US government is breaking up Big Razor before it gets to Big Tech
The rape allegations against Philip Roth’s biographer are a damning condemnation of publishing