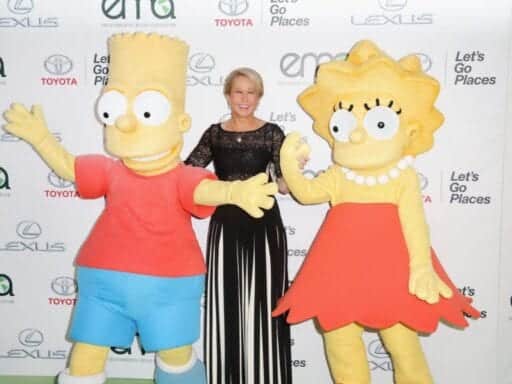 Yeardley Smith is one of the most famous women on earth, though you might not know it if you just bumped into her somewhere — at least until she said something. That’s because Smith is the voice of Lisa Simpson, the precocious 8-year-old middle child of Homer and Marge Simpson and the center of some of The Simpsons’ best episodes. (“Lisa’s Substitute”! Sob!)

But Smith is much more than the famous kid she’s now played for more than 30 years. Her acting credits include numerous films and other TV shows, including the infamous Herman’s Head (sadly, she wasn’t one of the people inside Herman’s head) and the Oscar-winning film As Good as It Gets.

Her most recent project, Small Town Dicks, is ostensibly the most eclectic project in her portfolio. It’s a true crime podcast that examines cases from the point of view of the people who solved them, then sends Smith and her co-host Zibby Allen all around the country to tell the story of how these crimes were solved. It’s an engaging and thoughtful examination of how crimes can rock tiny little towns where everybody knows everybody.

And yet for as much as I wanted to discuss Smith’s interest in the true crime storytelling boom when she joined me for the latest episode of my podcast, I Think You’re Interesting, I also wanted to ask her about her three decades of playing Lisa Simpson. Our conversation started at the character’s very beginning, then transitioned to what will happen someday, when Lisa Simpson is no longer on television every week.

That portion of the episode — including Smith’s thoughts on what it means to play an 8-year-old for most of your adult life — is transcribed below, lightly edited for length and clarity.

Nancy Cartwright was on this podcast a year ago, and one thing we talked about was where Bart lives in her voice, and where she lives. Where do you see Lisa living in your voice, as opposed to your actual voice?

Well, this is me. [slightly higher] This is Lisa Simpson. [back to her voice] It’s not that far. Nancy, she studied voiceover. She’s much more skilled than I am at that.

I got the job because I’d been doing a play in Hollywood, in a tiny black-box theater here. We have a lot of Equity-waiver theaters, which means that if you have 99 seats or less, [Actors] Equity gives that theater a pass. And back in the day — this would have been ’86 — at an Equity-waiver theater, you literally got paid nothing. … You did it for the love of it, although in Los Angeles, I often feel like there’s an ulterior motive. “Maybe I’ll get discovered!”

I was doing this play called Living on Salvation Street, which was a really fun play. I was playing a teenager who liked to sing Elvis Presley songs and wanted to join the Army. I think about 19 people saw that play, but one of them, a year later, would cast the Simpsons on The Tracey Ullman Show. And she tells me that she knew immediately who should play Lisa Simpson, although I was originally first brought in to read for Bart.

But I don’t think that was calculated. We always have women do the voices of young boys because our voices don’t change. Let’s bring Yeardley Smith in, she can read for Bart, Lisa, doesn’t matter. Whatever. It wasn’t well thought-out.

Nancy, she read for Lisa, too, but she already knew she wanted to play Bart.

She said that she was drawn to him. Were you drawn to Lisa in a similar way?

Lisa didn’t really have a personality in those shorts we did on The Tracey Ullman Show. She really was just a brat. We were both brats, me and Bart. She was really a foil for him. He was the star of those shorts. And I am a younger sister, so I said, “Oh, I know how to do that. That’s no problem.”

It wasn’t until we went to half-hour that James L. Brooks, our executive producer, said, “I want Lisa Simpson to be a genius, and I want her to play the saxophone.” And that’s when she started to become a person. I feel like she’s quite separate from me. I feel like she exists wholly in her own right, and it’s not unlike knowing somebody most of your life like you would know a really good friend.

When [The Simpsons] is over, it will be like my best friend moved away and is never coming back.

It will be really sad. I will be on the bathroom floor in the fetal position for weeks. Please send food.

Lisa is a very mature 8-year-old, but she’s forever 8. I assume that you age. I don’t know. Maybe we’re going to find out you don’t.

I do [age]. [laughs] I have a portrait in my attic, but I feel like it’s not working as well as I would like. [laughs]

How has your relationship to playing a kid changed over the years?

It’s been incredibly cathartic. Again, another unexpected byproduct of something that I’ve done in my life. It’s also true that Lisa Simpson is the catharsis for all of our writers, who were super-smart geniuses who had no idea where they fit in when they were kids, so they work out all of their childhood angst with Lisa Simpson.

For me, I feel like Lisa has a resilience that I really struggled to master as a child. She comes to it so easily. She bounces back much more quickly than I did. I was an anxious kid, and I didn’t have clinical anxiety, but I worried all the time. I’m still a terrible worrier. I wanted to be good at everything. I was a perfectionist, which, by the way, for any young listeners, that is a zero-sum game you will never win.

I set the bar sometimes unreasonably high, but now I sort of chuckle at it and say, “Well, that’s pretty fantastic. Let’s see if we can touch that bar.” Now, for instance, the rejection that we get in show business, it’s not that it doesn’t affect me anymore; I just recover from it more quickly. So I’m more like Lisa Simpson now than I was when I was 8. I wish I had been like Lisa Simpson when I was 8. Don’t we all?

I wish I had been the voice of reason for my entire community when I was 8 years old.

That would have been good! Rats.

For much more with Smith, including her thoughts on why true crime captures so many of our human fascinations, her wide-ranging and eclectic interests, and her long history of working with James L. Brooks, listen to the full episode.

The US plans to end all support for UN agency that aids Palestinian refugees
R. Kelly released a 19-minute song called “I Admit.” It doesn’t admit much.
Trump undercut his message to black voters with celebrations of racism and white history
How Trump gave insurance companies free rein to sell bad health plans
Why are used cars so expensive right now?
The conspiracy theories about the origins of the coronavirus, debunked