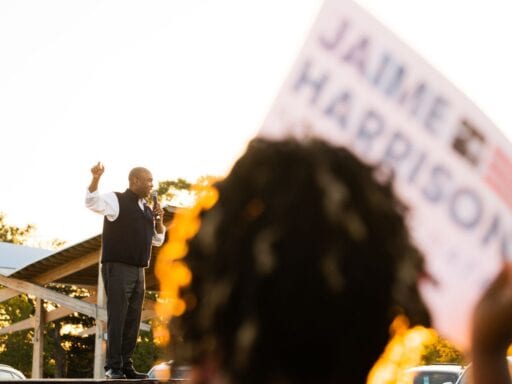 “Not in my wildest dreams did I imagine a campaign growing like this campaign has grown.”

Jaime Harrison has done what few expected: Polls now have him within single digits of Sen. Lindsey Graham in the South Carolina Senate race.

The degree of support he’s received has surprised many, including Harrison himself.

“I’m amazed by it,” he told Vox. “I got into this race because I knew I had a shot, but not in my wildest dreams did I imagine a campaign growing like this campaign has grown.”

This past quarter, Harrison raised $57 million — the most money any Senate candidate has raised in a single quarter in history, according to the New York Times. These funds have allowed Harrison to compete statewide in South Carolina in a way not many Democrats have been able to in the past, enabling him to close the double-digit polling gap with which he started his campaign. Harrison is among the Democrats who’ve picked up strong momentum this year amid a polarizing presidential race.

The path to an ultimate win over Graham is a tough one, however: Harrison will need an expansive coalition of voters — including crossover Republicans — and strong Democratic turnout. According to Cook Political Report’s Jessica Taylor, Democrats have previously capped out at 48 percent voter support in the state.

Harrison spoke with Vox about his expectations for Republican support and the legislation he’d prioritize if he’s elected. This interview has been edited and condensed for length and clarity.

At the start of this campaign, there was a sense from some people that this was potentially a long shot. And now you’re at a point where you’re tied with Lindsey Graham. So, I was wondering if you could talk about what you’ve done since the launch of your campaign to build up this support?

Well, you know, this has been a grassroots movement that we’ve built here in South Carolina.

When I first started, we didn’t have an email list, so we had to build it from the ground up. I think folks here in South Carolina were just so hungry for change. They were so hungry for a positive message, a unifying message. They were hungry for some leadership that was going to focus on them and their families and their communities.

We have gotten thousands of volunteers, I think we’re on 14 or 15,000 people who signed up to volunteer for our campaign. We’ve gotten well over a million contributions — small dollars — contributions from every county in South Carolina, and people are just so excited.

I’m amazed by it. I always knew that I had a shot. You know, I got into this race because I knew I had a shot. But not in my wildest dreams did I imagine a campaign growing like this campaign has grown.

I had seen Cook Political Report note that there’s typically a 48 percent ceiling for Democrats in federal races in South Carolina. And I was wondering if you could talk about what the coalition of voters looks like that you see getting your campaign to either the majority or the plurality that you need to ultimately win?

I think in the end, this is about Democrats, independents, and Republicans who are just fed up with where things are going in the direction of the state, who don’t like the divisive politics that they see each and every day, who are looking for somebody who’s going to focus on not what is the Democratic solution or the Republican solution, but what is the right solution for our community? And that’s where I am.

You know, I say this often: Lindsey Graham is trying to scare people to support him. I’m trying to inspire people to support me. And it’s a different way of looking at the world. And so what we have seen is that we are attracting a section of Republican supporters who don’t like the direction of the country and where we’re going. We are winning overwhelmingly with independents over Lindsey Graham, and we have lockclad support with Democratic voters. So that’s the coalition that we have.

When you’re able to get somebody like Dick Wilkerson, who was on Lindsey Graham’s [presidential campaign] finance committee … You know, he has voted for Republicans in the state, ran one of the largest companies in South Carolina — Michelin — and to have him come from being a Lindsey supporter to a Jamie Harrison supporter, it just demonstrates that things are changing in the state.

[One of the advertising efforts that Harrison’s campaign has invested in targets conservative voters in an attempt to convince them to support a third-party candidate instead of Graham. If enough of these voters do not support Graham, these shifts could help Harrison win with less than a majority of the vote.]

If President Trump ends up winning South Carolina, do you see ticket splitters being part of this coalition as well? And have you seen signs of their support for your campaign?

We believe that we’re going to get some crossover support. And we appreciate it. In the end of the day, our focus is on the race to win the United States Senate. And we believe that we are well positioned to do just that.

What would be your first legislative priority if you’re elected to the Senate?

I just rolled out a rural hope agenda about a month ago. And that’s to rebuild and revitalize rural communities across South Carolina. And it’s a five-part plan [that] focuses on infrastructure, health care, education, economic opportunities, and also includes a Farmer’s Bill of Rights.

And so I believe that in order to move South Carolina from the top of all of the bad lists to the top of all the good lists, we have to figure out how [to] address the historical disparities and inequities that we find in our rural communities in the state, and so that’s going to be one of my top priorities.

Medicaid expansion is something you’ve highlighted frequently in the past. I’m wondering how you would ensure that South Carolinians currently in that expansion gap receive coverage if you’re elected to the Senate.

One of the things I think we need to look at is — Doug Jones has a bill called the [States Achieve Medicaid Expansion] SAME Act, which in essence restarts the clock for the states that have yet to expand Medicaid. So it gives them a new window to have a few years in which the federal government picks up 100 percent of the cost of Medicaid. I believe that we need to pass the SAME Act.

You’ve previously said that you’re wary of eliminating the filibuster at this point. But I’m curious: If Mitch McConnell continues to do what he’s done in the past and block Democratic priorities in the new term, like expansions to health care coverage, is there potential you would reconsider that position?

It’s about opening a Pandora’s box, and the question is [that] there may be short-term political gains, but are we comfortable with long-term repercussions for that? For me, it is about the most vulnerable in our society. There are a lot of programs that they rely upon. And are we willing … to jeopardize those programs and the safety net that is for those communities? And I’m just not willing to take that risk at this point.