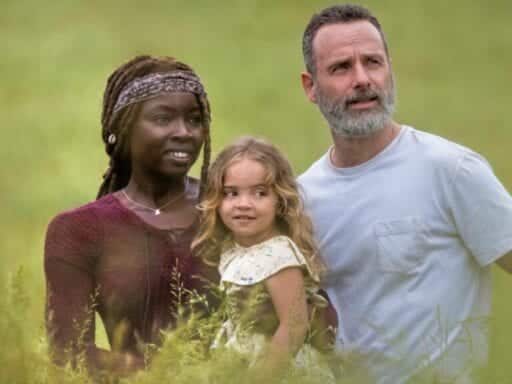 The zombie series, facing major changes both behind the scenes and on screen, looks to cement its legacy.

Say what you will about The Walking Dead, but it has the ability to bounce back out of nowhere.

The show will routinely follow long, dull stretches of its story with several episodes that revitalize and revivify it, as when its incredibly boring second season and often boring third season were followed by its much more exciting fourth and fifth (and best) seasons.

And even in the midst of the long seasons of drudgery that followed (and we’re talking long, long seasons of absolute drudgery), The Walking Dead would sometimes surprise with a great episode or even a great stretch of episodes that might give you hope it would escape the death spiral of its “war with Negan” storyline just yet.

All of which is to say that I’m not counting on the show suddenly turning the corner and becoming essential again in season nine, which debuts Sunday, October 7. But the combination of its new showrunner — Angela Kang, taking over for Scott M. Gimple — and a time jump of roughly a year and a half to two years means that the show feels refreshed.

The Negan war — which, again, ate up the better part of two seasons and maybe even three seasons when you consider that season six was mostly concerned with foreshadowing it — is finally in the rear-view mirror. Now, The Walking Dead has returned to questions of how civilization can rebuild itself, which protagonist Rick Grimes (Andrew Lincoln) undertakes as a kind of tribute to his dead son, Carl.

The season nine premiere contains a lengthy, entertaining set piece that takes place in the Smithsonian, as Rick and company loot it for certain museum pieces that might help them figure out how to re-establish agriculture on a more consistent basis.

And the next two episodes (AMC sent the first three to critics for review) deal with such heady concepts as establishing a new code of law that will strike everyone as fair, or the tensions and trade among the various communities that are now knit together in a very loose confederation of mutually beneficial relationships.

I’m sure there are Walking Dead viewers out there who aren’t interested in questions of how to rebuild civilization, but I welcome those questions compared to the endless nihilism of the Negan arc. There are still zombie sequences and hints of some greater villain waiting over the horizon, but if you fell off the Walking Dead bandwagon somewhere in the last couple of years but are curious to hop back on, the season nine premiere isn’t a bad place to start. The time jump, at least, means it won’t be that hard to get caught up.

But let’s talk about the real reason the show feels rejuvenated, which I’m going to place behind a spoiler warning, even though most of this stuff has been reported in the entertainment press for months.

Before production began on season nine, the series revealed that the season would be the last to feature Lincoln and his costar Lauren Cohan, who plays Maggie. Both actors are leaving after six episodes (confirmed in the case of Cohan; widely reported in the case of Lincoln), though it’s not immediately clear if that means they’ll be departing in episode six, or if they will sit out a couple of episodes in the show’s first half-season to exit in episode eight (the midseason finale).

Both Rick and Maggie are major characters, who’ve been with the show for a long while. The Walking Dead’s pilot is pretty much just about Rick waking up in the midst of a zombie apocalypse; Maggie joined the show all the way back in season two. Both have been central to many of the show’s biggest storylines, and even if Rick has never been the show’s most vivid character, well, it’s hard for any show to lose its lead.

But in figuring out how it’s going to write Rick and Maggies out of its story, The Walking Dead has shifted from zombie carnage to the more complicated work of figuring out what the legacy of its characters — and of humanity in general — might look like. Season nine is about what it means to try to preserve some piece of what was, while also trying to make a world that improves on the one that preceded it.

I wouldn’t put it past the show to undercut all of this thoughtfulness with a sudden left turn into the dark horrors of its world. But on some level, The Walking Dead seems to be using this major turning point in its life cycle, this new showrunner and new character focus, to think about what its own legacy will be.

What mark will The Walking Dead leave behind once it’s off the air? It has few imitators, and its storytelling style hasn’t really spread beyond its own confines. TV isn’t drowning in zombie shows, or even in horror shows, and even The Walking Dead’s biggest fans would admit the show has had considerable ups and downs. It raised AMC’s profile and helped the network — one of TV’s best purveyors of drama — make a boatload of money, which it funneled back into some great TV. But The Walking Dead itself? Inevitably, the show will always be seen as a mixed bag.

The Walking Dead will probably run for years after Lincoln and Cohan’s exit, and it will surely survive more cast turnover, as it has before this. But for the first time, the show seems interested in thinking about what its whole picture will be once it ends. That commitment to thinking about both its future and its past has made The Walking Dead’s present the best that it’s been in ages.