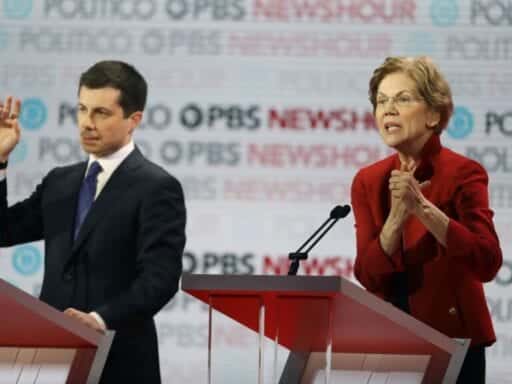 The wine cave controversy is really about political access, and who gets to have it.

The biggest on-stage fight of Thursday’s Democratic debate, between Sen. Elizabeth Warren (MA) and South Bend, Indiana, Mayor Pete Buttigieg — indeed, one of the biggest fights we’ve seen come out of any of the debates — was about wine caves.

Or rather, it was a fight about high-dollar fundraisers, political access, and who gets to have it.

A disagreement that has been simmering for weeks between the progressive Massachusetts senator and the moderate mayor erupted during the PBS NewsHour/Politico debate, when Warren brought up Buttigieg’s recent high-dollar fundraiser at the Hall Rutherford wine caves in Napa Valley. The vineyard’s billionaire owners, Craig and Kathryn Hall, recently hosted the pooled-press fundraiser for Buttigieg, per a report from the Associated Press’s Brian Slodysko.

Said wine caves recently went viral when Recode reporter Teddy Schleifer tweeted out photos of the Buttigieg event, showcasing the glittering chandelier made out of 1,500 Swarovski crystals. And, as Slodysko recently reported, Hall Rutherford’s wine caves produce bottles of cabernet sauvignon that go for as much as $900.

Both Warren and fellow progressive Sen. Bernie Sanders, who have sworn off high-dollar fundraisers, have been messaging about the wine caves for the past few days (Sanders’s campaign even did some fundraising off it). So when Buttigieg made a jab at Warren after she finished talking about her grassroots-funded campaign, saying, “Can’t help but feel that might have been directed at me,” a fight about wine caves was born.

“Billionaires in wine caves should not pick the next president of the United States,” Warren responded.

Here’s the rest of what Warren then said about Buttigieg’s fundraiser:

So, the mayor just recently had a fundraiser that was held in a wine cave, full of crystals and served $900-a-bottle wine. Think about who comes to that. He had promised that every fundraiser he would do would be open-door, but this one was closed-door. We made the decision many years ago that rich people in smoke-filled rooms would not pick the next president of the United States.

Buttigieg responded by essentially arguing that he’s not going to turn down money from wealthier donors, and that high-dollar fundraisers would be an essential part of beating President Donald Trump in the general election. He also brought up Warren’s personal wealth, and later, her past closed-door fundraisers as a Senate candidate. Here’s his response:

You know, according to Forbes magazine, I’m literally the only person on this stage who is not a millionaire or a billionaire. So this is important. This is the problem with issuing purity tests you cannot yourself pass. If I pledge — if I pledge never to be in the company of a progressive Democratic donor, I couldn’t be up here. Senator, your net worth is 100 times mine. Now, supposing you went home and felt the holiday spirit — I know this isn’t likely, but stay with me — and decided to go on pete.com and gave the maximum allowable by law, $2,800, would that pollute my campaign because it came from a wealthy person? No. I would be glad to have that support. We need the support of everybody who is committed to helping us to defeat Donald Trump.

Warren and Buttigieg got in a few more jabs at each other — perhaps not surprising for two candidates with some crossover in their voter base.

The bitter argument was only resolved when Sen. Amy Klobuchar (MN) jumped in to inform voters that she, for one, had “never even been to a wine cave,” but that she had once visited a “wind cave” in South Dakota.

“I did not come here to listen to this argument,” Klobuchar said, launching into a speech about the need for campaign finance reform. “I came here to make a case for progress.”

The Warren/Buttigieg fight that has been bubbling for weeks finally came to a head on Thursday night. But neither candidate necessarily walked away a winner.

Campaign finance reform and getting money out of politics is having a moment in the Democratic Party right now. It did in 2016 as well, when Sanders proved that grassroots, small-dollar donations could power a presidential campaign — even one costing many millions of dollars.

That’s true again in 2020, when all Democratic candidates are forswearing corporate PAC contributions and touting their small-dollar donations. Sanders and Warren in particular boast of their grassroots fundraising prowess, and Buttigieg goes out of his way to mention the 2 million donations he’s received from over 700,000 individuals so far this campaign cycle. But on Thursday, Sanders contrasted the number of billionaires who donated to his campaign (zero) to Biden and Buttigieg’s.

Getting money out of politics is Warren’s signature issue. She said on Thursday night: “If you can’t stand up and take the steps that are relatively easy, can’t stand up to the wealthy and well connected when it is relatively easy, when you are a candidate, then how can the American people believe you will stand up to the wealthy and well-connected when you are president and it is really hard?”

Buttigieg responded by bringing up Warren’s past acceptance of high-dollar donations as a Senate candidate. But the South Bend mayor has been feeling the heat on this issue even more so in recent weeks, as Warren called on him to disclose his campaign bundlers and open his closed-door fundraisers up to the press (something Biden has been doing since the start of his campaign). Buttigieg has done both things, but Politico recently reported his campaign left over 20 high-level fundraisers off a public list it released last week.

Given Buttigieg’s relatively short path to national renown and the case that he’s always been part of an elite class, not being able to speak more openly about his ties to powerful organizations and donors could be problematic the further along he gets in this race. That’s especially the case given that the Democratic base is increasingly skeptical, if not outright adversarial, toward the wealthy and privileged class in the United States.

Getting money out of politics is a big issue for Democrats, whether liberal or moderate. And the left in particular is suspicious of Buttigieg’s willingness to hold fundraisers — especially in such opulent settings as the Hall Rutherford wine caves. Democrats want politicians who are less beholden to corporate interests and who don’t feel like they owe favors to donors.

A Trump second term
Primaries 2018: Can Grimm go from prison to Congress? Will Oklahoma OK pot?
Jesse Pinkman’s future looks bleak — but beautiful — in Netflix’s Breaking Bad: El Camino trailer
Trump finally has his Space Force — and it will make orbital security its priority
How police unions became so powerful — and how they can be tamed
Iran expands nuclear program amid heightened tensions with the US