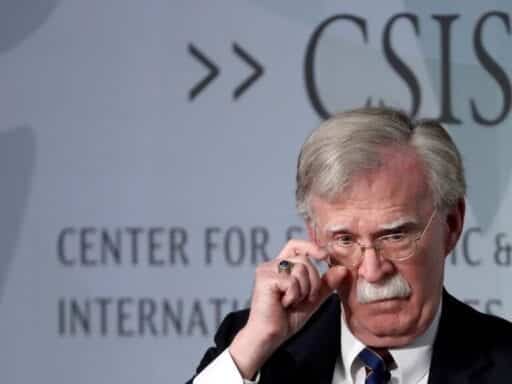 The most devastating witness yet, Republican struggles, Giuliani’s legal jeopardy, and more.

The news for President Donald Trump this week on the impeachment inquiry was grim.

Most significantly, a witness gave testimony to House committees that proved devastating to one of the White House’s key arguments — confirming that Trump personally seemed to link withholding military aid for Ukraine with his demand that Ukraine investigate his political opponents.

That witness, Bill Taylor, was one of what’s rapidly becoming a parade of government officials who are testifying to the inquiry despite the White House’s order not to. That’s emblematic of a broader trend of Trump’s weakness and ineffectiveness in responding to the scandal. Republicans have struggled to effectively defend the president, and even Trump himself felt enough heat to drop his plan to hold the G7 conference at one of his properties.

Meanwhile, reports suggested that Rudy Giuliani is in serious jeopardy from a criminal investigation that has already resulted in the arrest of two of his associates. And two Washington, DC, judges ordered the administration to turn over documents that are relevant for the impeachment inquiry.

The latter of those rulings came down Friday afternoon, as Chief Judge Beryl Howell ruled that the Trump administration had to turn over grand jury material from the Mueller investigation to House Democrats, because — and this is the key part — the House is, in fact, conducting a legitimate impeachment inquiry.

This didn’t just cap off a week of bad news for Trump, it also undercut one of Republicans’ key talking points: their complaint that the inquiry isn’t valid until the whole House votes on it.

Bill Taylor gave the most devastating testimony yet

By far the most important development of the week was Tuesday’s closed-door testimony by Bill Taylor, the top diplomat at the US embassy in Kyiv: It revealed important new information about what, exactly, happened between Trump and Ukraine.

To set the stage: It’s been well documented by now that Trump tried to push Ukraine to launch investigations designed to serve his political needs — one into the origins of the FBI’s Russia investigation and one into Burisma (a gas company where Joe Biden’s son served on the board). It’s also been well documented that Trump officials linked this demand to something the Ukrainians wanted: a meeting between Trump and President Volodymyr Zelensky at the White House.

But perhaps the biggest question at the heart of this scandal has been whether Trump’s decision to block about $400 million in congressionally approved military aid to Ukraine was tied to this pressure campaign as well. That’s what many believe is the most appalling allegation, that Trump was threatening Ukraine’s security by withholding assistance they needed for their continuing military conflict with Russia unless they helped him politically.

And Taylor gave the clearest testimony yet suggesting that this was indeed what happened. Though Democrats haven’t released a transcript of his full testimony, in a detailed 15-page opening statement, Taylor said:

Taylor added that Sondland “tried to explain to me that President Trump is a businessman,” and “when a businessman is about to sign a check to someone who owes him something … the businessman asks that person to pay up before signing the check.” All of this sounds exactly like a quid pro quo, despite Trump’s insistence that it isn’t one. (Taylor also adds that the analogy “made no sense” because “the Ukrainians did not ‘owe’ President Trump anything.”)

All of this debunked Trump’s continued insistence that he didn’t link the aid to his demand for investigations. Taylor’s information suggests that, 1) yes he did, 2) the Ukrainians were told of it, and 3) it came from Trump personally. So his testimony makes the factual picture at the heart of the scandal look even worse for President Trump than it already did.

Taylor’s appearance was part of a trend. Again and again, sitting government officials have turned up for these depositions in the impeachment inquiry — in stark defiance of the Trump administration’s instructions that they should not.

Indeed, it was just a few weeks ago that White House counsel Pat Cipollone announced the Trump administration would not “participate” in what they called an unconstitutional impeachment inquiry. The move seemed like it could pose a problem to Democrats’ investigation.

Except what ended up happening is that several government officials have just testified anyway. They’ve done so in response to Democratic subpoenas, but loquacious opening statements like those of Taylor and former Ambassador to Ukraine Marie Yovanovitch suggest they’re not exactly reluctant to talk.

And it’s possible Democrats could soon land their most famous witness yet. CNN’s Kylie Atwood and Veronica Stracqualursi reported Friday that former National Security Adviser John Bolton, who exited the administration on bad terms last month, has communicated with House committees through his lawyers about a potential deposition. Given his high-level White House access, his unimpeachable Republican credentials, and his falling-out with Trump, Bolton’s testimony could be explosive.

As the scandal has worsened, meanwhile, Republicans predisposed to defend Trump have looked increasingly at a loss for how to do so.

Apparently unable to straightforwardly defend what Trump did, the GOP’s primary focus this week was on criticizing how House Democrats have been conducting the inquiry. They profess to be deeply troubled, for instance, by the fact that recent witness interviews have been conducted behind closed doors rather than in public.

All this culminated in a stunt on Wednesday in which several fiercely pro-Trump House Republicans stormed the secure room in which Defense Department official Laura Cooper was scheduled to be deposed. It was a farcical move that involved ordering pizza and some Republicans bringing their cellphones into a room where such devices are banned. And in the end, it didn’t matter; proceedings were delayed for a few hours, but Cooper then testified anyway. In any case, Democrats are expected to move to public hearings in the coming weeks, so this talking point may soon be abandoned.

In the Senate, meanwhile, Lindsey Graham (R-SC), who chairs the Judiciary Committee, has come under pressure from Trump supporters for purportedly not doing enough to defend the president. His response was to draft a resolution condemning the House’s handling of the impeachment inquiry so far. But similarly, his criticisms were based on process. “I’m not here to tell you that Donald Trump’s done nothing wrong,” he said at a press conference Thursday.

Graham has indeed been somewhat hesitant to launch an all-out defense of Trump, which has led to much squirming on his part during this scandal. Just days ago, he said that if “Trump actually was engaging in a quid pro quo outside the phone call, that would be very disturbing.” After Bill Taylor testified that he was told this was the case, Graham complained this was “hearsay” and that this needed to be “tested” by questioning other witnesses. Other witnesses are expected to confirm Taylor’s account next week, so we’ll have to wait and see what Graham’s next excuse will be.

The Trump Administration has been losing court battles

Meanwhile, the US federal district court for the District of Columbia gave Democrats two assists in their impeachment inquiry. First, on Wednesday, Judge Christopher Cooper ruled that the State Department had to release various Ukraine-related records — particularly involving Rudy Giuliani’s communications with State officials — within 30 days. Cooper did so in response to a lawsuit brought by the group American Oversight.

Then, on Friday afternoon, Chief Judge Beryl Howell sided with House Judiciary Committee Democrats in a separate suit. Howell ruled that the Justice Department has to hand over Mueller report materials that had been withheld due to grand jury secrecy — and she gave them a deadline of October 30 to do so.

“The need for continued secrecy is minimal and thus easily outweighed by HJC’s compelling need for the material,” Howell wrote. She added: “Tipping the scale even further toward disclosure is the public’s interest in a diligent and thorough investigation into, and in a final determination about, potentially impeachable conduct by the President described in the Mueller Report.” (Recently, of course, Democrats’ impeachment inquiry has focused more on Ukraine than on the Mueller investigation, but getting more material can’t hurt.)

Howell also refuted another common Republican process criticism of the impeachment inquiry: their complaint that the full House hasn’t held a vote to officially approve the inquiry. “A House resolution has never, in fact, been required to begin an impeachment inquiry,” she writes.

Separately from the action unfolding in Congress, several news developments suggested that Trump’s lawyer Rudy Giuliani is in increasing legal jeopardy from an investigation that has already ensnared two of his associates in the Ukraine caper (Lev Parnas and Igor Fruman) for campaign finance violations.

We already knew that Giuliani was under scrutiny in this probe from the US Attorney’s Office for the Southern District of New York. But Politico’s Darren Samuelsohn reported Friday that “the criminal division of the Justice Department in Washington has taken an interest in the former New York mayor, too, meaning an expansion of resources that indicates the politically sensitive probe into the president’s personal attorney is both broader and moving at a faster pace than previously understood.” Unsurprisingly, CNN reported that Giuliani has recently been “approaching defense attorneys for possible representation.”

On Friday, then, the somewhat embarrassing news broke that Giuliani had accidentally left NBC News’ Rich Schapiro a voicemail in which he is heard discussing business with someone whose identity is unclear. “The problem is, we need some money,” Giuliani said on October 16, a few days after Parnas and Fruman’s arrests. “We need a few hundred thousand.” What he needs the money for isn’t clear, though a legal defense or some new business endeavor are two possibilities.

Finally, this doesn’t relate to the Ukraine issue, but one of President Trump’s most controversial moves last week was his announcement that he would host the 2020 G7 meeting at one of his own properties in Miami.

Democrats accused him of brazen corruption and Republicans once again struggled to defend it. And it even seemed possible that the impeachment inquiry could expand to cover this self-dealing as well.

So it’s noteworthy that, on Saturday evening, two days after making the announcement, Trump backed down:

….Therefore, based on both Media & Democrat Crazed and Irrational Hostility, we will no longer consider Trump National Doral, Miami, as the Host Site for the G-7 in 2020. We will begin the search for another site, including the possibility of Camp David, immediately. Thank you!

It’s a sign that the president has been feeling some heat from his Republican allies behind the scenes — and that he calculated that, for the moment, this move was simply too controversial to defend.

Parasite wins Best Picture and makes Oscars history
The coronavirus exposes the history of racism and “cleanliness”
Trump: Saudi Arabia paid the US $1 billion for more troops. Pentagon: Eh, not quite.
A 39-year-old and a 4.5-year-old talk about Trolls World Tour
The quest to build the most diverse Cabinet in US history, explained
The state of the 2020 Democratic primary polls, explained