The weekend in the US-Saudi fight over Jamal Khashoggi, explained 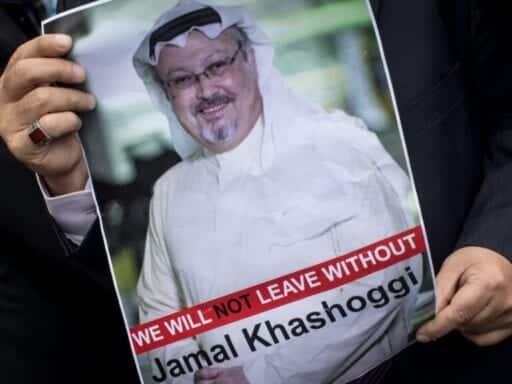 How Trump’s tough talk turned into a dodge about “rogue killers,” as well as further withdrawals from a swanky Saudi conference.

It’s been 13 days since prominent Saudi journalist and dissident Jamal Khashoggi mysteriously disappeared inside Riyadh’s Consulate in Istanbul. But the impact of his disappearance and possible murder — which was allegedly ordered by Saudi Arabia’s crown prince — is still being felt across the Middle East and the US.

First, President Donald Trump and the Saudi regime are currently locked in a war of words. Khashoggi was a US resident at the time of his disappearance, and Trump on Saturday vowed to impose a “severe punishment” on the regime if it was involved in the journalist’s alleged murder.

Riyadh responded the next day that it wouldn’t cave to “threats.” But on Monday, after a conversation with Saudi Arabia’s King Salman, it seemed that Trump had changed his mind — he speculated that “rogue killers” murdered the writer.

Second, the economic fallout for Saudi Arabia continues. Riyadh planned a big investment conference for next week featuring many top names in government, business, and media. But several media sponsors and speakers pulled out last week, and major Wall Street companies, like JP Morgan Chase, decided over the weekend that they wouldn’t attend either.

The growing pressure may have led Saudi Arabia to agree on Monday to let Turkey search its Istanbul Consulate — the one where Khashoggi disappeared on October 2.

If you missed any of this because you wanted to enjoy a weekend free of global intrigue, don’t worry. We’ve got you covered.

Trump criticized Saudi Arabia. Then, he sort of took it back.

What a difference 48 hours make.

On Saturday, CBS’s 60 Minutes released an excerpt of its interview with Trump in which he vowed to push back strongly on Riyadh if it had anything to do with Khashoggi’s possible murder.

“There’s a lot at stake. And maybe especially so because this man was a reporter,” Trump told Lesley Stahl. “There’s something really terrible and disgusting about that, if that were the case. So we’re gonna have to see. We’re going to get to the bottom of it and there will be severe punishment.”

However, in the interview, which fully aired on Sunday, Trump reiterated a point he made last week: that he doesn’t want to hurt Riyadh so much that it won’t spend $110 billion on American weaponry.

Regardless, the Saudis didn’t take kindly to Trump’s words. An anonymous official put out a strong statement through a government media outlet on Sunday seeming to rebuke the US president.

“The kingdom affirms its total rejection of any threats and attempts to undermine it, whether by threatening to impose economic sanctions, using political pressures, or repeating false accusations that will not undermine the Kingdom and its staunch positions,” the report from the Saudi Press Agency read.

In no part of the statement did the official provide any evidence that would exculpate the Saudi government for Khashoggi’s disappearance. Meanwhile, Riyadh has threatened to raise oil prices if the US or others impose sanctions on it.

Trump then called King Salman on Monday to discuss the issue. The president notably didn’t speak with Crown Prince Mohammed bin Salman, known by the nickname MBS, who US intelligence believes authorized a plan to lure Khashoggi back to Saudi Arabia, though Pompeo, National Security Adviser John Bolton, and White House adviser Jared Kushner have previously spoken with MBS about the incident.

After the call, Trump tweeted that he would send Pompeo to Saudi Arabia to speak with King Salman — not MBS. Trump also made sure to mention that the king “denies any knowledge of whatever may have happened.”

Just spoke to the King of Saudi Arabia who denies any knowledge of whatever may have happened “to our Saudi Arabian citizen.” He said that they are working closely with Turkey to find answer. I am immediately sending our Secretary of State to meet with King!

Hours later, Trump speculated that perhaps Riyadh had nothing to do with Khashoggi’s disappearance.

“He didn’t really know,” Trump told reporters outside the White House about his conversation with the top Saudi monarch. “[I]t sounded to me like maybe it could have been rogue killers, who knows? We’re going to try getting to the bottom of it very soon. But his was a flat denial.”

“It sounded to me like maybe these could have been rogue killers. Who knows? We’re going to try getting to the bottom of it.” https://t.co/ycHTGetpwh pic.twitter.com/NmJFzPbhzK

And there you have it: In just two days, Trump went from promising Saudi Arabia would face consequences and to somewhat letting it off the hook. It’s quite a walk back for the president, and it could signal that he doesn’t actually want to punish Saudi Arabia at all.

Major companies are backing out of a high profile Saudi conference

Riyadh plans to host a three-day conference starting on October 23 called the Future Investment Initiative that’s been nicknamed a “Davos in the Desert.” One reason Saudi Arabia put the meeting together was to attract foreign money and strengthen its economy.

That goal seems further away than ever in the aftermath of Khashoggi’s disappearance and possible murder.

The chiefs of Wall Street giants JP Morgan Chase, Blackstone Group, and BlackRock all pulled out of the conference over the weekend. JP Morgan Chase CEO Jamie Dimon had originally planned to give a keynote address at the conference, so this leaves Saudi Arabia just over a week to find another prominent speaker for its showpiece.

One major financial player has yet to back out, though: Treasury Secretary Steven Mnuchin. He still plans to go because the conference will hold sessions on how to curb terrorist financing, an issue that is important to the Trump administration.

But based on the recent Wall Street news, it’s possible Mnuchin will reverse course as well. “Mnuchin will make up his mind as the week progresses and as new information surfaces,” Trump’s top economic adviser Larry Kudlow told ABC’s This Week on Sunday.

Meanwhile, my colleague Alexia Underwood curated a list of all the major companies, organizations, and people that have withdrawn from the investment conference. Here are just a few:

Turkey will investigate what happened at the Saudi Consulate

Riyadh’s consulate in Istanbul is the scene of the potential crime. For days, Turkey has led an investigation into what may have happened to Khashoggi when he walked into the mission on the afternoon of October 2.

On Monday, Riyadh allowed a joint Saudi-Turkish team to look inside the Consulate to gather evidence about what happened. The decision comes amid mounting global pressure from US lawmakers and European leaders to figure out what led to Khashoggi’s disappearance.

It’s a big deal: The Saudi Consulate in Istanbul, just like its embassy in Ankara, is technically Saudi sovereign territory. This latest development means the kingdom has allowed foreigners, in this case Turkish authorities, to conduct an investigation on its soil.

At this point it’s unclear if investigators will find anything. After all, the possible crime happened nearly two weeks ago, allegedly at the hands of a well-trained, 15-man Saudi security team.

But what it shows is that Riyadh has realized it can’t sweep this situation under the rug, just as it has in the many other instances where it has disappeared dissidents around the world. International pressure, at least for now, may be working.

The question is if Trump will join in on the pressure campaign — or if he’ll stick to it even if he commits.