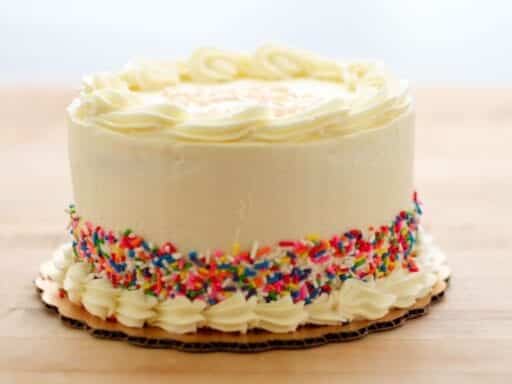 When did birthday cake get so vanilla?

3 Musketeers recently announced its first new flavor in six years. It is called “Birthday Cake,” and according to the press release, it features “vanilla-flavored nougat and colorful sprinkles covered in rich milk chocolate.”

This certainly sounds cake-inspired, in that some cakes are vanilla and some vanilla cakes have sprinkles. I agree; I, too, have partaken in such cakes. I have also eaten chocolate cakes, though, that I believed were birthday cakes, and red velvet birthday cakes, and once a rum cake that was also in commemoration of aging.

Is there a type of cake that is for birthdays? Have I been doing birthdays wrong? When did we decide that “birthday cake” had a distinct flavor somehow different than “graduation cake” or “bat mitzvah cake”?

The list of products designed to taste like birthday cake is long. In 2012, for example, Oreo introduced a limited edition birthday cake Oreo to celebrate the brand’s 100th birthday. The Huffington Post described them as having a “strong vanilla aroma” and tasting like “someone slathered an Oreo with vanilla frosting out of a can.” (This is praise.) Like the 3 Musketeers, it featured “flecks of rainbow sprinkles.”

A year later, USA Today reported at least 17 “birthday-cake flavored new products” had recently hit the market, including, but not limited to, Good Humor birthday cake bars, and party cake Peeps. 2014 saw the coming of the short-lived birthday cake M&M, which was billed, cryptically, as “delicious milk chocolate infused with birthday cake flavor.”

As time marches on, birthday cake has continued to proliferate: Airheads, the candy shaped like a slap bracelet, released a birthday cake flavor in celebration of itself in 2016. “Your mouth just pools with saliva the second you bite into this thing,” one poet-reviewer wrote of the experience, “but at least it’s cake-flavored saliva.” That year, the New York Times announced the coming of the “Funfetti Explosion.” Funfetti, to be clear, is basically the same as most interpretations of birthday cake: yellow base, with mixed-in rainbow sprinkles.

Now there are birthday cake Red Vines, which are counterintuitive, in that they are not red (technically they are twistettes), and birthday cake Auntie Anne’s pretzels, which are surprising, because they are pretzels. According to Nielsen, the flavor “birthday cake” has seen sales increase “more than 29 percent since 2017.”

“The Birthday Cake flavor is vanilla cake and sprinkles mixed in,” offers a representative for Halo Top, which makes a birthday flavored frozen dessert. “The flavor profile is basically the texture of eating vanilla cake batter with sprinkles!”

“I think it means box-mix or grocery store yellow cake that tastes mostly like butter, egg yolks, sugar, and lots of artificial vanilla extract,” says Kristen Miglore, creative director at Food52, and author of Genius Desserts. The colorful sprinkles don’t really do anything in terms of flavor, but they “really drive home the birthday vibes visually.”

Annette Warrell-Jones, marketing manager at the Warrell Corporation, a candy manufacturer, which is, at this very moment, working on a “natural birthday cake-flavored” cotton candy, agrees that, in her estimation, the flavor of birthday cake is essentially vanilla batter. Everyone agrees on this: Birthday cake is vanilla. Birthday cake has sprinkles.

I want to know when we all decided this, but nobody will tell me. It is just the natural order of the universe. It is what a birthday is.

“Our mission is to spread small moments of joy with our fans and this latest flavor brings that celebratory feeling to the everyday,” the 3 Musketeers press release patiently explains. It occurs to me at this point that it would be difficult for 3 Musketeers to release a chocolate birthday cake bar, since 3 Musketeers bars are chocolate already. It occurs to me “yellowcake” is also a form of concentrated uranium.

Leah Morrow, executive pastry chef of the Williamsburg Hotel and Brooklyn Bread Lab, suggests the tyranny of yellow cake with sprinkles stems from our collective longing for lost youth. “It is nostalgic to see something cream colored with flecks of color, like a vanilla cake with vanilla icing and sprinkles,” she says. It is not that birthday cake even has to remind you of your childhood in particular, but just a childhood. The concept of childhood.

“It’s a children’s flavor, and children celebrate birthdays with a gusto,” suggests Warrell-Jones. Birthday cake, as a flavor, is the simplest kind of birthday cake, cheerfully uncomplicated, the primary colors of cake. Birthday cake is basic, and it is pretty, and in an ironic twist of anti-aging, it reminds us all of when we were basic and pretty, too.

Supreme Court deals major financial blow to nation's public employee unions
Felicity Huffman sentenced to 14 days in a college admissions case that raises questions of race and...
Air travel is surging. That’s a huge problem for the climate.
How the coronavirus might upend the November election
Trump is getting free advertising for his golf course out of his UK trip
Why Republicans keep talking about Amy Coney Barrett’s 7 kids