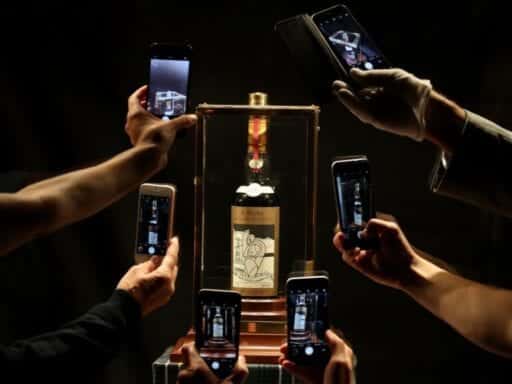 Share
Loading...
A bottle of the Macallan Valerio Adami 1926, the world’s rarest and most valuable whiskey. | PA Images via Getty Images

How can a single bottle fetch close to $2 million?

In 2010, feeling flush, I bought a bottle of Pappy Van Winkle 20-year-old bourbon for $110. This particular bourbon has become a thing — a thing that you cannot get without parting with lots of your money. Much like the Tulip Mania in the Dutch Golden Age, Winkle prices have now cleared the hurdles of the rational. So I enjoyed the bourbon, kept the bottle, and then sold the empty a short while back on eBay for $115.

I had accidentally wiggled a toe in the world of whiskey investing. But there are many people that are all-in, and a weird world it is. This is a place where the prices can be boggling and the pursuit can be the stuff of an intricate mystery novel.

Here’s an example: In December of 2018, Christie’s auction house presented a 40-case collection of pre-Prohibition American whiskeys at auction. (The collection was stashed for years in a hidden 1920s cellar behind false bookcase doors.) The auction’s Lot 750, a grouping of 24 pints of 1914 Hermitage Bottled in Bond 9-year-old whiskey, fetched a hearty sum of $24,500. Similar lots of that sale — and there were many — carried similar valuations.

But that mere 25 grand? A trifle when matched with the nearly $1.9 million just paid at an auction through Sotheby’s for a bottle of 1926 Macallan.

Of course, there are many collectors whose budgets don’t soar into the stratosphere. Spirits collectors might begin with much more modest acquisitions and ambitions and build from there.

“There’s almost a typical journey the ‘classical’ collector goes down,” says Andy Simpson, co-founder of Rare Whisky101 out of Scotland. “You fall in love with the broad Scotch category — the flavors, the social aspect, the myth, the magic, the people, and the process, so you buy a few bottles to drink. When you find your tipple of choice, you become a curious consumer and maybe buy a limited edition, an older age statement, single cask, or other variant.

“As time progresses, you naturally end up buying more than you can drink, so you stick some bottles in your closet, cupboard, wardrobe, spare room, wherever (under the bed, in my case to start!) and you become a whisky collector as well as a whisky drinker.”

(A note: For consistency’s sake, we’re going to dub all of the whiskeys in the general narrative as “whiskey” rather than the alternate “whisky,” which is commonly used for Scotches, Japanese spirits, and distillations from some other countries. In conversations with our interviewees, we use their preferred spelling.)

How a bottle becomes a collectible

Some distilleries essentially create a collectible by restricting the bottling of a noted spirit to a fixed number, only released at a limited time, perhaps for the holidays. They set a bottle price, but that’s often exceeded when the bottles are brought out to retail or other secondary markets. Scarcity becomes a significant market factor.

Larger retailers often make arrangements with distilleries to purchase limited-release single-barrel spirits that they bottle and sell at a premium. Liquor laws have loosened considerably in the last few years; retailers can now offer tastings in-house in many states, so that a potential collector can get a snootful of the stuff and make a decision on a pricey bottle. Some distilleries also break out the unusual bottles for a tasting to induce a larger purchase. And some select bars carry unusual or rare spirits so that the masses might get a shot of something they could never bring home in full — that is, if you’re willing to shell out $1,200 for a shot.

But Anne-Sophie Bigot, a spirits blogger and head of a whiskey consultancy in her native France, says you don’t need to be a crowned head of Europe to find a few good drams. “I don’t have the same financial means as many collectors, so I had to adapt,” she says. “I feel much more happy when I discover hidden treasures, some liquid gems that a few people care about but that bring me more joy than the big shiny names. It’s all about the thrill of the chase, and I’m kind of addicted!

“You can find some great bottles without putting a mortgage on your house. I would, for instance, never buy a new limited edition after it’s sold out and then goes for crazy prices at auction. I’m the living proof that whisky collecting doesn’t have to be an elitist hobby.”

It’s not unheard of to sample your collection

Some collectors are astute investors, alert to dips and slumps in the market, keeping tabs with the latest technology on bottles and barrels, and keeping their goods in impenetrable vaults. Some collectors are all that — but they also like to taste some of their spoils.

Justin Sloan, who publishes the Bourbon Review and runs Justin’s House of Bourbon in Lexington, Kentucky, has the good sense to know when to hold ’em and know when to open ’em.

“There are obviously people that love to buy things, squirrel them away, and then sell them later as an investment,” he says. “Some will buy multiples of something and basically hoard them, but sell some of them to pay for the ones they drink.”

A collector might get lucky reaching into the back shelf of a mom-and-pop store and pulling out a forgotten bottle whose dust suggests a liquid treasure, but many rely on networking with collectors, connections at distilleries, and networking at luxury whiskey events or festivals, where the liquor and the stories flow.

And, of course, many rely on the auction houses, who like to do a little marketing with their offerings. Here are some tasting notes for a recent auction from the Gordon MacPhail auction house for a 1968 Caol Ila Scotch from a private collection, referenced from the WhiskeyWash site:

If that doesn’t get a collector’s bonfire smoldering, I don’t know what will.

Counterfeits are a serious problem

Even careful collectors can fall prey to one of the whiskey world’s big buyer bewares: There are a fair number of fake rarities in circulation. The folks at Rare Whisky 101, for example, work with geochemistry experts at Scottish labs to test a spirit’s age and origin; they consistently find a percentage of fakes.

Andy Simpson says there are multiple counterfeiting methods. “We broadly define fakes/forgeries into three categories: refills, replicas, and relics,” he says. “Refills can be both the easiest and the most challenging to spot. In some cases, a loose-fitting capsule can be simply slipped off a bottle, the contents emptied and replaced with inferior liquid, then the original capsule reapplied and ‘smoothed over.’ What you then in effect have is a perfect bottle, labels, closure, and capsule, just with the wrong contents. Providing the contents are color-matched well enough, they are 100 percent impossible to spot until they’re opened.

“Replicas are when a high-value bottle has been forged, so they are in effect copies of an original bottle. Spotting these comes with experience. We also advise anyone inexperienced to do plenty of research before buying rare, old, valuable bottles. We have one very simple rule for these relics: Carbon-date a sample before committing to buy. Assume these are fake and prove them genuine before purchasing. What we actively encourage is for people to approach us and ask for our opinion of whether a bottle is real or fake,” Simpson says.

Though valuations for collectibles have rabbited upward for close to 10 years, the first half of 2019 saw a bit of slippage, according to Simpson. He specified high annual increases — up to 38 percent — for years, but slowing growth in the first half of 2019. That may have been due to a record supply of rarities, which has now calmed, and growth has resumed.

Of course, a shrewd investment eye isn’t the end-all of the collectibles world. Love is also part of the story. “When I buy a bottle, it’s because I fell in love with it one way or another, I can’t get rid of it that easily,” says Bigot. “I have a lot of unopened bottles in my whisky cabinet that I just keep, probably waiting for the special occasion, but every bottle I buy has a purpose. Or so I like to tell myself.”

And if you’re able to sip judiciously, you can stretch that one special occasion to many. “I think that’s the beauty of whiskey,” says Sloan. “Once you open a bottle of whiskey, it’s not like wine. You don’t have to polish it off in 12 to 24 hours. There’s something to opening it up, trying it, and then going back to it a few months later, trying it again, and seeing how it changed in the glass. It’s not unheard of for somebody to open a bottle of whiskey and have it open for a year or two years. It depends on how much self-control they have.”

I’d love to test my self-control with a $25,000 bottle of bourbon, but that will have to wait. And no matter what I do buy, I’m keeping every bottle now — who knows when an empty one will fetch a good price?

A new study from Rwanda is the latest evidence for just giving people money
How to think about coronavirus risk in your life
A new bill would make all police misconduct allegations and settlements public
Donald Trump didn’t need the wall
John McCain will be honored in Arizona, Washington, DC, and Annapolis
The Dow Jones falls to where it was when Trump took office