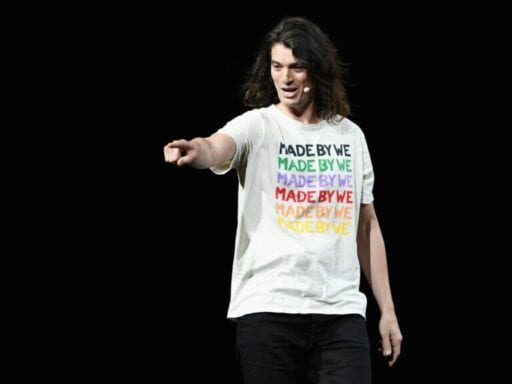 From the “next Alibaba” to a financial liability for SoftBank, here’s how the coworking startup got to this point.

WeWork, the coworking unicorn startup whose IPO has been one of the most highly anticipated public offerings of 2019, has been imploding in recent weeks.

The company, which was about to begin its roadshow to get public investors interested in buying its shares, postponed its IPO last week in a highly unusual move after investors have expressed concern about its business model and leadership structure. And now, reports indicate that some of the company’s board members, including officials representing SoftBank, its biggest investor, want to push out WeWork’s founder and CEO Adam Neumann.

In the months and even years leading up to WeWork’s IPO push, concerns abounded about its massive losses, whether it’s really a tech company, and its hard-partying corporate culture. But investors seemed to be fine with WeWork’s many problems — until it registered to trade on the public markets. Suddenly the company’s insider dealings (like being both its own landlord and tenant), its track record of burning cash without a path to profitability, and reports of poor executive judgment seemed to become an issue.

The abrupt drop in WeWork’s valuation, to just a third of the $47 billion it had previously been valued at in a January funding round, probably had something to do with it. WeWork declined to comment to Recode on the matter. SoftBank did not immediately respond to a request for comment.

SoftBank, a Japanese telecom giant whose $100 billion Vision Fund investment arm has flooded Silicon Valley with money and transformed the industry’s finances, first invested in WeWork in 2017. It now owns nearly a third of the company.

Masayoshi Son, chairman & CEO of SoftBank Group Corp, has in the past called WeWork his “next Alibaba,” referring to the highly profitable investments he’d made in the Chinese tech behemoth. At one point SoftBank wanted to be WeWork’s majority stakeholder, a plan it scrapped at the beginning of the year due to market turbulence and opposition from its investors — probably an early sign that SoftBank backers were uncomfortable tying its finances so closely to such a turbulent company.

But its investors have known about most of WeWork’s problems for a while.

“It’s one thing for people to know, but when you’re visiting with potential investors and they raise all these questions, that’s where the rubber hits the road,” Amy Borrus, deputy director at the Council of Institutional Investors, told Recode. “It turns out a lot of investors had pointed questions as to how the company was structured, how he [Neumann] ran the company, as well as the economic outlook for the company.”

From the next Alibaba to a financial liability for its biggest investor, here’s how WeWork got to this point.

WeWork’s corporate governance issues are myriad, and the company’s corporate structure is at the root of it all. Like many other tech companies that have recently gone public, WeWork has a multi-class stock structure that gives Neumann more power than the company’s other stockholders.

Neumann has been able to maintain control of WeWork because the Class B- and C shares he owns each had 20 votes to every one vote regular shareholders would get for their Class A shares. After a wave of criticism, WeWork amended its S-1 two weeks ago and limited Neumann’s super-voting shares to 10 votes for every one regular share’s voting power — but that’s still a high ratio.

This means it will be hard to get rid of Neumann if he doesn’t want to leave since his super votes still give him the power to fire the entire board. But if Neumann did get rid of his opponents on the board, he would run this risk of making WeWork look even more chaotic than it already is in the eyes of investors, threatening the outcome of an IPO. Neumann is reportedly in discussions to voluntarily give up his role as CEO, according to a Reuters.

Original company filings stated that if he died, his wife Rebekah, the co-founder and the chief brand and impact officer of WeWork, would have been charged with appointing a successor. The updates to WeWork’s S-1 changed that Game of Thrones scenario to one in which the WeWork board would be responsible for finding the next CEO in the event of Neumann’s death.

Rebekah is one of several family members employed at WeWork, including Neumann’s brother-in-law, who serves as its “head of wellness.”

Neumann’s board supremacy has allowed him to enact a number of nonstandard financial practices that many have viewed as a conflict of interest.

WeWork, which at its heart is a company that leases long-term office space in order to rent it to others in the short term, didn’t initially plan to own property. Not doing so saved it from larger expenses that would burden its already laden balance sheet. But earlier this year, the Wall Street Journal reported that Neumann was privately buying property that he then leased to WeWork.

And at the same time, Neumann was borrowing money from WeWork at little to no interest. So the company was paying him rent while lending him money.

Responding in part to investors’ concerns, Neumann said he would transfer ownership of these buildings to the company’s real estate investment vehicle, ARK.

In a similar vein, WeWork paid Neumann nearly $6 million to change its name to “The We Company,” a trademark that Neumann owned. In the mea culpa/updated S-1, he gave that money back.

The company has also attracted public scrutiny for, until recently, having no women on its board. WeWork finally appointed its first female board member earlier this month.

It’s no secret that WeWork is, for now at least, a money-losing business. It lost $1.6 billion on $1.8 billion in revenue last year.

But that’s par for the course when it comes to technology startups, which WeWork has tried really hard to convince the world that it is. Its ability to burn money surely makes it seem like a tech company — even if it doesn’t have other important tech company qualities, like low growth costs and a network effect, meaning the value of its product increases when more people use it.

The company’s expectations have changed even since its initial IPO filings in August. The company’s updated S-1 in September got rid of numerous references to “break-even,” “profitable,” and “cash flow” — suggesting those goals are further off than expected.

And WeWork’s operating losses, which is how much it costs to bring in revenue, are marching in lockstep with its growing revenue. That means that the more money WeWork makes, the more it loses. Ideally, you’d want to see the opposite: shrinking losses as the company gains more revenue.

Its biggest expense — 65 percent of its revenue — is renting office space, which makes sense for a real estate company but not for a tech company, where you’d want to be able to rely on savings as you grow.

Of course, much of WeWork’s losses can be attributed to its breakneck speed of growth. Opening up new locations is expensive, and it can take time to see returns.

Presumably, if WeWork stopped expanding, it would curtail its losses. But even that is difficult to know, since WeWork hasn’t explained how profitable or not its established locations are.

As the Financial Times wrote in August, “[I]nstead of a neat profit and loss table for mature and growth locations, WeWork calculates a ‘contribution margin’ — the metric formerly known as ‘community-adjusted EBITDA [earnings before interest, taxes, depreciation, and amortization].’ Like any adjusted financial metric, it’s designed to say to investors, ‘ignore these costs, because they don’t matter to our core economics.’” (Investors have been widely skeptical of WeWork’s community-adjusted Ebitda measurement.)

What we do know is that WeWork has lots of debt, including a $702 million bond that’s due in 2025 and whose price has fallen in the wake of yesterday’s CEO news. The company also needs a lot more money, and raising it is becoming more and more difficult as its valuation declines.

Recent allegations that Neumann brought a “sizable chunk” of weed on a private jet across international borders (which is illegal) as well as his general “unusual exuberance and excess,” as first reported in the Wall Street Journal, have reportedly led to calls for him to step down from his chief executive role.

But for many who have been following WeWork closely, these allegations are nothing new. They’re just a few examples from a long list of other liabilities connected to a company culture that some former employees say can be hard-partying and inappropriate.

Since its inception, WeWork has touted a “work hard, party hard,” ethos, with an emphasis on the party. One of its biggest early market differentiators in its coworking spaces was that it served free beer on tap (it’s now put a four-beer limit on its bottomless kegs). Some have said this reflects WeWork’s culture within its own organization and that this has created an undesirable environment, particularly for women.

Last year, a former WeWork director, Ruby Anaya, sued the company because she alleges that colleagues sexually assaulted her at two mandatory work events where alcohol was served. Anaya blamed WeWork’s leadership for establishing a top-down “frat-boy” culture, claiming that Neumann himself “plied” her with tequila shots in her interview. WeWork has denied Anaya’s allegations and called her a poor performer.

One of the alleged assaults against Anaya took place at WeWork’s former annual “Summer Camp” festival-style work retreat — where thousands of employees would camp in tents together in bucolic settings like the British countryside, listening to talks from the likes of Deepak Chopra and dancing to live performances from artists like Lorde. WeWork didn’t hold the event this past year.

The company has also made a dizzying list of acquisitions and investments — like its $13 million investment in a wave pool company — that many have viewed as distractions from WeWork’s core business (which is still burning through piles of cash). The company has also tried to get into the business of running gyms, co-living apartments, coding camps, and even a school aimed at budding child entrepreneurs, called WeGrow.

The company has said its ambition is to create a “We” brand that permeates every aspect of people’s lives, but according to the Wall Street Journal, these other endeavors outside of WeWork’s coworking business have been struggling.

Reports that Neumann will voluntarily step down come after several outlets reported over the weekend that WeWork’s board would meet to discuss his potential removal as CEO as soon as Monday. It’s unclear exactly how and when this will play out, but Neumann’s control over his company may soon change.

While WeWork’s drama has reached an inflection point in recent days, the company has been a mess for a while. The warning signs were visible, but the private market largely ignored them and continued to pour billions of dollars into the company, with SoftBank leading the charge.

More than anything, the current WeWork debacle raises bigger questions about SoftBank and the future health of its Vision Fund, as well as the funding environment for tech startups at large. SoftBank’s other crown jewel, Uber, also went through an executive shake-up in the approach to its IPO when former CEO and co-founder Travis Kalanick resigned in 2017. But even with new leadership, Uber has struggled on the stock market since going public and recently laid off 8 percent of its workforce.

Whether or not Neumann, like Kalanick, is ousted from his role, those bigger questions will remain.

The loneliness of being mixed race in America
Senate Republicans promise a quick floor vote on a Trump Supreme Court nominee
What happens if a presidential nominee gets the coronavirus?
Tuesday’s impeachment hearings were a disaster for Republicans
Michael Bloomberg says he’s not running for president
The Untamed, streaming on Netflix, ripped my heart out and fed it to me. I can’t get enough.