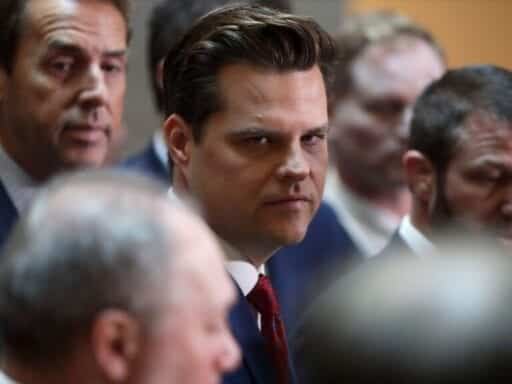 Share
Loading...
Rep. Matt Gaetz stands with a group of Republicans protesting the handing of the impeachment inquiry in October 2019. | Alex Wong/Getty Images

Republicans have complained about the whistleblower’s silence. He’s offering to answer their questions.

The whistleblower who first brought concerns about President Donald Trump’s interactions with Ukraine to light has said he is willing to directly respond to Republican questions, according to his lawyer.

That lawyer, Mark Zaid, told CBS News he informed Rep. Devin Nunes (R-CA) — who is the ranking Republican member of the House Intelligence Committee — on Saturday the whistleblower had volunteered to answer Republicans’ questions in writing under oath and penalty of perjury.

Trump and other Republicans have called for the testimony of the whistleblower for some time, and have intensified that request in recent weeks. Nunes, along with Republican Reps. Michael McCaul and Jim Jordan, wrote a letter to House Intelligence Committee chairman Rep. Adam Schiff on October 23 demanding the chairman schedule a public hearing with the whistleblower to “fully assess the sources and credibility of the employee.”

Trump has similarly called for more information, tweeting, “The Whistleblower must come forward,” and asking repeatedly, “Where’s the Whistleblower?”

Seemingly in answer to these entreaties, the whistleblower has offered to answer Republican questions about his complaint, which Trump has labeled “fraudulent.”

“Being a whistleblower is not a partisan job nor is impeachment an objective,” Zaid wrote on Twitter. “That is not our role.”

The lawyer added the whistleblower would answer any question as long as it did not “seek identifying info, regarding which we will not provide, or otherwise be inappropriate.”

The whistleblower’s identity has been a top issue of concern for both Republican lawmakers and Trump, despite it being protected by federal law to ensure safety from retaliation.

“We must determine the Whistleblower’s identity,” Trump tweeted in October. Sunday he demanded the whistleblower be revealed, writing, “The Whistleblower got it sooo wrong that HE must come forward.”

The Whistleblower got it sooo wrong that HE must come forward. The Fake News Media knows who he is but, being an arm of the Democrat Party, don’t want to reveal him because there would be hell to pay.
Reveal the Whistleblower and end the Impeachment Hoax!

The whistleblower has made a similar offer previously, offering written testimony if the committee submitted questions as a group. Republicans — as members of the minority — complained that this process restricted them from questioning the individual. In recent weeks, Schiff has argued the whistleblower’s testimony may not be necessary because his allegations have been corroborated via testimonies from White House aides and other officials.

Trump and Republican lawmakers have consistently discredited the whistleblower by painting the individual as a pawn in a partisan game with the end goal of toppling the Trump administration. It’s been an attack that they’ve relied on since the whistleblower’s complaint was first released. Sunday, for instance, Trump told reporters he read the whistleblower is “an Obama person, it was involved with Brennan, Susan Rice which means Obama, but he was like a big anti-Trump person. Hated Trump and they said terrible things.”

These allegations have not been proven; Zaid has said his client “never worked for or advised a political candidate, campaign, or party.” The whistleblower would presumably be asked to provide answers about his history with Democrats and Democratic campaigns; for Republicans, a chance to question the whistleblower would provide an opportunity to try to unearth evidence to support these claims. However, the whistleblower’s willingness to confront these Republican allegations would seem to suggest confidence in being cleared of partisan bias.

Hearing from the whistleblower could be damaging to a portion of Trump’s defense strategy. The president has worked to discredit the anonymous official by criticizing his silence, suggesting he has something to hide. Should he speak out — even in writing — this point of attack would become invalid.

To be clear, the written response might not change anything. Republicans question the political motivations of the whistleblower, which is why they’re seeking the individual’s identity. There’s a possibility that no matter what the whistleblower says, lawmakers will dismiss the answers as biased and partisan and continue to characterize the individual as unreliable, just as Trump continues to claim the whistleblower’s complaint contradicts a White House memo of a call with Ukrainian President Volodymyr Zelensky despite the fact the memo very clearly supports the whistleblower’s allegations.

In recent weeks, Republican talking points against the impeachment inquiry have been countered one by one.

When Republicans attacked the process of the impeachment inquiry, Democrats in the House of Representatives made it official through a vote on Thursday. When Republicans complained about the closed-door hearings, Democrats announced hearings would soon be public. And when Republicans claimed the whistleblower was hiding, the individual volunteered to directly establish a line of communication with them.

Republicans, who have already been struggling to defend Trump against impeachment, are running out of both attacks and defenses in regards to the inquiry. Accepting the whistleblower’s offer may present them with some new lines of attack, but it very well could make their defense of the president more difficult.

One Good Thing: The wonderful sci-fi novel A Memory Called Empire makes diplomacy enthralling
The comforts of ASMR in the coronavirus pandemic
Joe Biden is president, but Rand Paul still won’t admit the election wasn’t stolen
This week in TikTok: All coronavirus, all the time
How to get a hobby this winter
The Vox Book Club kicks off our June discussion of The Princess Bride