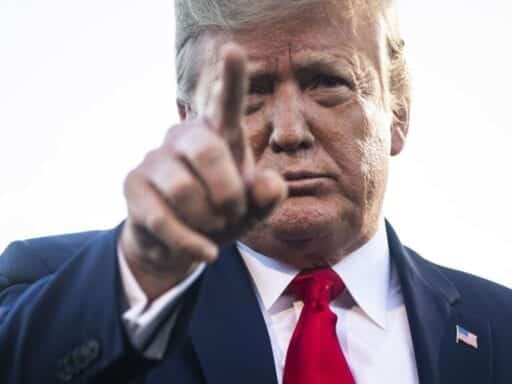 The lawyer sent the White House a cease-and-desist letter, which went ignored.

Trump’s “calls to the public to identify my client by name and his suggestion that he would support acts of violence against my client are, candidly, some of the most dangerous and reckless things a President of the United States can say,” wrote attorney Andrew Bakaj.

“Let me be clear: should any harm befall any suspected named whistleblower or their family, the blame will rest squarely with your client.”

Many have argued that Trump’s threats not only endanger the whistleblower, who works for a US intelligence agency, but could also have a chilling effect on other members of the federal government interested in reporting wrongdoing within the administration.

Trump, however, didn’t heed the letter — in fact, on Friday, he doubled down.

“The whistleblower is a disgrace to our country. A disgrace. And the whistleblower, because of that, should be revealed,” Trump told reporters, adding that the lawyer should be sued “for treason.”

Trump claims election where he lost the popular vote was “a landslide,” says “my polls are up” (they’re not), then adds, “everything [the whistleblower] wrote in that report was a lie” (it’s broadly corroborated). He then threatens to sue whistleblower’s lawyer “for treason.” pic.twitter.com/xHWaF3mrnt

“Why isn’t the first whistleblower going to testify anymore?” Trump asked, referencing reports that the whistleblower won’t speak to House investigators. “Because everything he wrote in that report almost was a lie.”

House Democrats — and now, the whistleblower’s lawyer — have countered this argument (which has also been refuted by witness testimony and a memo released by the White House) by saying the whistleblower is hesitant to testify because Trump’s public attacks have put him in danger.

“As a direct consequence of the President’s irresponsible rhetoric and behavior, my client’s physical safety became a significant concern, prompting us to instead state our willingness to only answer written interrogatories,” Bakaj wrote in his letter.

The cease-and-desist letter will not change the president’s stance on the whistleblower, and it is unlikely to influence his attacks on the man. In part this is because the president sees these attacks as a way of defending himself against the impeachment inquiry. It is also because, despite Bakaj’s warning that Trump could face legal repercussions for his actions, there is actually little in federal law to contain his behavior. In fact, while federal law usually protects whistleblowers from the kind of blowback this whistleblower is experiencing, those laws don’t apply to the president.

There are robust protections in federal law against the kind of harassment Trump is leveling at the whistleblower. The rub: These laws don’t apply to the president, and the whistleblower is at a unique disadvantage because of his role in the intelligence community.

As Vox’s Li Zhou reported, intelligence officials are barred from speaking publicly about their work, which makes it hard for whistleblowers from that community to defend themselves:

Government officials in other agencies are able to more publicly discuss their complaints with the press, and bring them to other bodies within the government like the Office of Special Counsel, as well as the courts. But because of its emphasis on protecting sensitive data and government secrets, the intelligence community’s protections for whistleblowers are significantly less robust than those offered by other federal agencies.

Under existing laws, whistleblowers in the intelligence community can submit a report if they have been targeted professionally as a result of a complaint, but they are required to advocate for themselves through an internal review process.

That process, David Colapinto, a founding attorney of the National Whistleblower Center, told Zhou, is often full of conflicts of interest and gatekeepers without accountability. “The enforcement mechanisms for intelligence community employees are weak,” Colapinto said. “The process is entirely internal to the intelligence community and there is no public transparency of this process.”

There’s another critical wrinkle in protecting the whistleblower from Trump’s attacks — the only way to hold the president accountable for breaking whistleblower laws is impeachment, which, obviously, is easier said than done.

National security lawyer Brad Moss told Vox’s Sean Collins “there really isn’t much to stop Donald Trump from ordering the disclosure of the identity of the whistleblower.”

“He himself is arguably beyond the scope of the legal restrictions,” Moss said. “Any of those normal provisions don’t really apply to the president because the president is the head of the executive branch … so it’s unlikely there’s any viable legal recourse that could be taken in that situation.”

That means there’s not much to protect the whistleblower if Trump decides to publicize his identity, save for that convoluted process that has already begun due to the whistleblower’s complaint — impeachment.