The White House admits to a Ukraine quid pro quo. Just not that one. 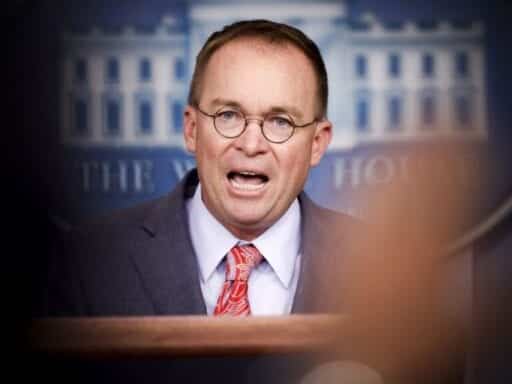 Mick Mulvaney says the US held aid to Ukraine over a 2016 DNC server conspiracy theory.

Acting White House Chief of Staff Mick Mulvaney just admitted — on camera, in front of reporters, in the White House briefing room — that the Trump administration withheld military aid to Ukraine to get it to investigate absurd, debunked conspiracy theories President Donald Trump believes in.

Trump has pushed two Ukraine-related conspiracy theories that have been repeatedly and widely discredited: 1) that Ukraine interfered in the 2016 election, not Russia; and 2) that a Ukrainian-owned company whisked away a computer server from the Democratic National Committee (DNC) to the Eastern European country to cover up that fact.

The truth is literally the opposite of all of that: Russia meddled in the 2016 election while favoring Trump; the company the president maligns — CrowdStrike — is headquartered in the US, not Ukraine; and there was never an actual physical server for anyone to take to Ukraine anyway.

And yet, Mulvaney told a room of reporters Thursday that the Trump administration chose to hold onto military aid that Ukraine desperately needed to fight Russia in order to compel Kyiv to look into those conspiracy theories.

“Did he [Trump] also mention to me the corruption related to the DNC server? Absolutely, no question about that,” Mulvaney, who serves as the director of the Office of Management and Budget as well as the acting White House chief of staff, told ABC News’s Jon Karl. “That’s it, and that’s why we held up the money,” which amounted to nearly $400 million in training, weapons, and financial support.

“To be clear, what you described is a quid pro quo” — Here’s Mick Mulvaney casually admitting that Trump held up aid to Ukraine as leverage to get the Ukrainian government to investigate the 2016 election pic.twitter.com/ylz7BKEmKd

Many countries, including the United States, use whatever incentives they can to get what they want from both allies and adversaries. That an American administration made aid contingent upon Ukraine acquiescing to an American demand on its face isn’t malpractice.

The problem in this case, though, is that the US withheld help to a friendly nation to fend off Russia solely because Trump can’t stop believing in a ridiculous conspiracy theory that his own officials have told him isn’t real. Tom Bossert, who served as Trump’s first homeland security adviser, told ABC News last month that aides repeatedly told the president his views on Ukraine were wrong, but that it did nothing to change his mind.

It’s worth pointing out that what Mulvaney admitted to isn’t the same thing House Democrats are looking into as part of their impeachment inquiry. They’re looking for evidence Trump withheld the aid until Kyiv agreed to start a corruption probe into Burisma, a Ukrainian gas company where Hunter Biden — Joe’s son — sat on the board. That would signal the president abused his foreign policy powers for his own political gain next year.

Asked by Karl to clarify whether the administration had also made the aid money contingent on Ukraine opening an investigation into Joe and Hunter Biden, Mulvaney said: “The look-back to what happened in 2016 certainly was part of the thing that he was worried about in corruption with that nation. And that is absolutely appropriate.”

Mulvaney noted that “corruption with that nation” could in fact point to Trump’s desire for an investigation into the Bidens. But the top aide was so adamant the money was tied to 2016-related probes that it’s not so clear.

But that doesn’t make what Mulvaney did openly admit to any less of a quid pro quo: Trump wanted Ukraine to prove his theory right, and didn’t want to release the money until Kyiv agreed to try.

It’s a devastating snapshot of how the US conducts foreign policy today: It’s one thing for Trump to want to do this, it’s another thing entirely for his team to acquiesce and then defend the action.

We’ve already seen an instance of Trump bringing up his conspiratorial views in high profile meetings about Ukraine.

Trump was referring to his view that Ukraine — not Russia — interfered in the 2016 election, and CrowdStrike covered it up. But CrowdStrike was hired by the Democratic National Committee (DNC) in 2016 to look into who hacked into their networks during the election. The firm determined that it was two Russian groups with Kremlin ties.

Trump still thinks — and has often mentioned — that a mysterious DNC server with the “real” information on it has gone missing, and that CrowdStrike (and the FBI) is somehow involved in its disappearance. He brought the issue up during his Helsinki meeting alongside Putin.

That’s incorrect. The company’s cofounder, the Russian-born US citizen Dmitri Alperovitch, is a senior fellow at the Atlantic Council think tank in Washington, which receives funding from Ukrainian oligarch Victor Pinchuk.

But that flimsy connection is a far cry from the firm he started being secretly run by an Eastern European billionaire. (Before coming to Vox, I worked at the Atlantic Council and interacted with Alperovitch on a few cybersecurity-related events and projects.)

It’s still unclear just where Trump got this idea in his head, but it’s ingrained enough that he mentioned it on a call with Ukraine’s president and built his entire Ukraine foreign policy around it.

The firing of McDonald’s CEO won’t solve the chain’s sexual harassment problem
How the very 2000s puka shell necklace made a comeback
The Senate GOP’s leverage on the coronavirus bill is shrinking
3 key races to watch in Oregon’s vote-by-mail primary
Watch the first-ever video of pigs using tools with no human prompting
Still going to the grocery store? With new variants spreading, it’s probably time to stop.