The White House claimed Trump is pro-LGBTQ. His policies show he isn’t. 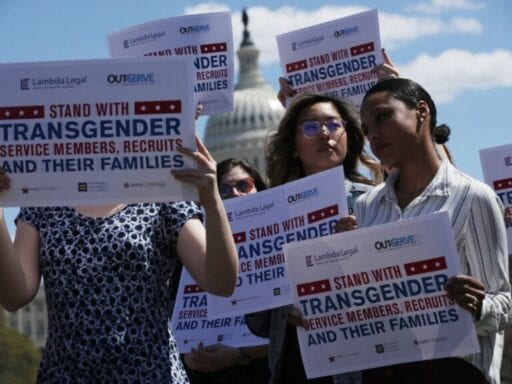 Share
Loading...
Activists participate in a rally at the Reflecting Pool of the US Capitol April 10, 2019, in Washington, DC. | Alex Wong/Getty Images

During a Monday press briefing, White House press secretary Kayleigh McEnany was asked whether the administration would consider lifting the transgender military ban that President Donald Trump first tweeted about three years ago this month.

But instead of answering the question directly, McEnany deferred, saying the administration is “proud” of its LGBTQ record and listed off several White House initiatives for gay rights, namely a pledge to decriminalize homosexuality globally, a change to the ban on gay men donating blood, and a pledge to end the HIV/AIDS epidemic by 2030.

None of those policies have anything to do with the transgender military ban, and only one of them, ending the AIDS epidemic, is related to trans people.

Reporter: Will the president end the ban on transgender people in the military?⁰
McEnany: Actually, we’re very pro-LGBTQ+ people pic.twitter.com/e7ctdfwQLt

One of the few policy wins transgender people have secured in the past three years came thanks not to the White House, but to the Supreme Court. In Bostock v. Clayton County, the Court ruled that employment discrimination against LGBTQ people is sex discrimination.

“It will be extremely helpful to our legal challenge for the trans military ban because it unequivocally supports and validates the main claim that we are making in those cases, which is that the ban discriminate based on sex,” Shannon Minter, an attorney at the National Center for Lesbian Rights (which brought a suit against the ban), told Vox. “I’m not sure people fully appreciate the scope of the victory in Bostock; it goes far beyond Title VII.”

More than 110 Democratic lawmakers wrote to Defense Secretary Mark Esper and Attorney General Bill Barr last Wednesday asking them to lift the trans military ban, citing that decision. “This policy is an attack on transgender service members who are risking their lives to serve our country and it should be reversed immediately,” the letter stated.

And despite what McEnany said about the administration’s record, it has rolled back numerous trans-specific and LGBTQ-related policies since taking office in January 2017 — on issues ranging from how to treat trans students to rolling back LGBTQ health care protections. And even those McEnany touted by name are being actively undermined by other administration actions.

“Trump has continuously sought to undermine LGBTQ rights and to suggest otherwise is simply wrong,” Vanita Gupta, president and CEO of the Leadership Conference on Civil and Human Rights, told Vox in a statement.

In his 2019 State of the Union speech, Trump announced a new initiative to end the HIV/AIDS epidemic in the US by 2030. Like many of the pro-LGBTQ policies McEnany cited, it sounds impressive when taken on its own — but to those actually doing the work on these issues, Trump’s promises ring hollow.

Though details were vague early on, some HIV activists raised eyebrows at the late target date of ending the HIV/AIDS epidemic, which matched that of the United Nations for ending the epidemic worldwide — including in the hardest-hit regions like sub-Saharan Africa. US activists thought it could be achieved here much earlier.

“In 2018, in anticipation of a federal initiative coming out, we put together a community-led road map to talk about what it would take to end HIV as an epidemic, [and] we’ve been talking for a long time from the angle of ending it by 2025, as opposed to 2030,” Jeremiah Johnson, HIV project manager at Treatment Action Group in New York City, told Vox.

Johnson drew a comparison between the administration’s effort and that of Australia, which has massively scaled up access to PrEP, a drug that prevents transmission of HIV, for vulnerable populations — a key step to reaching any eradication goal. “We could start to see dramatic reductions and new infections right now, but we lack a national plan for scale-up of prep and comprehensive HIV prevention,” he said. “While this initiative talks generally about certain pillars and a target, we don’t have a pathway on how to get to massive scale-up. So the concern for our coalition has also that this is going to be rhetoric without substance.”

McEnany also named the pledge to fight the criminalization of homosexuality by foreign countries — something that no previous Republican administration had committed to. Implementation of that pledge, however, has been spotty at best, advocates say.

“Under the Obama administration, the US was really playing a leadership role, not on one particular human right of LGBTQ people, but on the concept that LGBT people are entitled to the same human rights as everyone else,” said Ryan Thoreson, a researcher at Human Rights Watch. “I’m worried that under the Trump administration, we’ve seen more of a narrow commitment to serve. A real retreat from the broad panoply of LGBT human rights, both at home and abroad.”

Thoreson noted that the Trump administration has used the initiative to crack down on countries it considers enemies, like Iran, while overlooking that same commitment as it cozies up to homophobic regimes in places like Poland, Hungary, and Brazil. “They haven’t really used their power in a visible, obvious way to really urge allies to do better on LGBT rights,” said Thoreson.

Almost immediately after Trump took office in 2017, the administration rolled back an Obama-era memo directing schools to protect trans students from discrimination. Then that July, Trump announced he would order the military to ban trans people from serving. The administration went after trans prisoners as well in May 2018, deciding that in most cases, trans people should be housed according to their assigned sex at birth.

Just two weeks ago, the Department of Housing and Urban Development proposed a rule allowing homeless shelters to house trans people according to their birth-assigned sex.

“It’s impossible to delink [HIV prevention] from a commitment to human rights and uplifting the most marginalized communities in your society,” he said. “You cannot attack on all levels the life, liberty, property, and happiness of a community, and anticipate that you can actually address health care disparities in that community. Nor can you say that you are actually upholding your democratic American responsibility.”

When someone is uninsured or is afraid of being discriminated against by doctors, they are less likely to get the care they need, and that care is crucial to preventing the spread of HIV. Trans people, especially trans women, are especially at risk of contracting the virus. If doctors and insurance companies are able to deny care to trans women, HIV prevention efforts suffer.

It’s clear that despite McEnany’s declarations otherwise, policy, not rhetoric, tells the story of the Trump administration’s support for LGBTQ rights.

Ahead of a far-right rally in Portland, Trump tweets a warning to antifa
Trump’s “Mission Accomplished” moment?
How Trump let Covid-19 win
Hundreds of thousands attend protest in Hong Kong over extradition bill
Another Election Day challenge: People who have Covid-19 and need to vote
Airlines to Trump: we won’t help you separate migrant kids from parents