The White House is dealing with another Covid outbreak 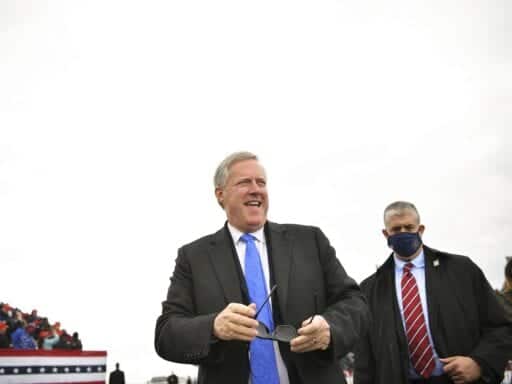 As daily confirmed coronavirus cases continue to break records, a new cluster of cases was reported in the White House — meaning the Trump administration again has failed to control the spread of Covid-19 within its own circles, as it struggles to reduce cases throughout the rest of the country.

Meadows has had a number of exposures since February: an interaction with an infected person at the 2020 the Conservative Political Action Convention, the nation’s largest conservative political convention, forced him — and other GOP leaders — to quarantine. And he was in close contact with President Donald Trump after the president was diagnosed with Covid-19 in early October. He has, however, until now, avoided becoming infected himself.

Meadow’s diagnosis comes less than two weeks after he admitted to CNN’s Jake Tapper that the administration isn’t going to control the pandemic.

“We are not going to control the pandemic,” Meadows said. “We are going to control the fact that we get vaccines, therapeutics, and other mitigation areas.” And Meadows claimed that the US would not be able to get the coronavirus under control “because it is a contagious virus.”

MEADOWS: We’re not going to control the pandemic

M: Because it’s a contagious virus

T: Why not make efforts to contain it?

M: What we need to do is make sure we have the proper mitigation factors to make sure people don’t die pic.twitter.com/0DYgk4rB3T

But there is a way to get the pandemic under control: And that is doing the opposite of the behavior Trump administration officials have been modeling.

The first White House Covid-19 cluster arose shortly after the White House held a large indoor, maskless, gathering to celebrate the nomination of Justice Amy Coney Barrett. Trump and his wife Melania both tested positive for the virus after that event, with Trump spending several days in the hospital.

There’s a reason this keeps happening over and over to those in Trump’s and the White House’s orbit: they simply don’t follow basic protection measures. This was evident on Tuesday night, when Trump held an Election Night event at the White House, with several hundred maskless people packed into a tight room. And there were speeches, as well as chanting — two activities known to increase the risk of spread.

.@MarkMeadows tested positive for Covid-19. On election night he was at the White House party with the president and his family and hundreds of unmasked people. pic.twitter.com/XyRliYIFdw

Covid-19 has been a continual problem for President Donald Trump’s White House. In early October, the president and his wife Melania both tested positive for the virus, with Trump spending several days in the hospital.

There’s a reason this keeps happening over and over to those in Trump’s and the White House’s orbit: they simply don’t follow basic protection measures.

Guests were reportedly tested before the event began, but as Vox’s Brian Resnick has explained, a negative test result doesn’t mean it is safe to mingle with others. And the new cases mean those who were in attendance Tuesday are now at risk of having been infected.

Meadows and the aides were just five of the more than 120,000 Americans who tested positive for Covid-19 Friday, a new record high. It was the third day in a row with over 100,000 new cases reported. There were at least 1,180 deaths from the virus Friday, the highest since mid September. And experts predict the case — and death — numbers will only rise as fall turns to winter.

In the face of this reality, Trump has continued to downplay the virus, and some of his advisers have pressed for wider spread reopening. He has returned to Washington, DC after holding nearly 20 large, mostly maskless rallies in the final days before Election Day. A rent study found that the president’s rallies over the summer may have caused an estimated 700 deaths. And in late July, Trump ally Herman Cain passed away from the virus shortly after attending a Trump rally in Tulsa, Oklahoma.

Trump and company have always leaned away from virus prevention methods and towards “returning to normal” after months of economic shutdowns. And the president has done so even more since becoming infected himself, telling supporters, “Don’t be afraid of Covid. Don’t let it dominate your life.”

But the problem with ignoring the advice of public health experts and living as one would normally is that the coronavirus demands carefulness. If the pandemic persists, it’s not possible to return to normal. That’s not a political stance, it’s just reality. The virus does not operate based on White House spin, and the repeated outbreaks in the building prove it.