The White House is reportedly limiting the FBI’s Kavanaugh investigation. Trump says that’s not the case. 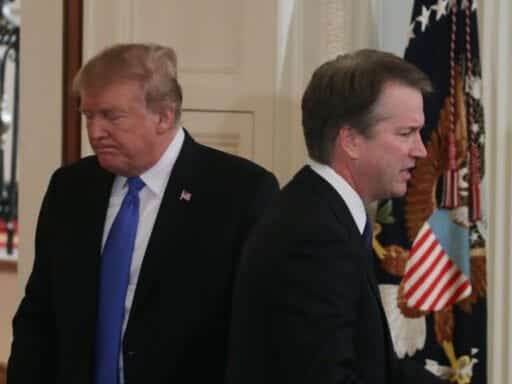 The FBI is reaching out to Christine Blasey Ford and Deborah Ramirez about their allegations of sexual assault and misconduct against Supreme Court nominee Brett Kavanaugh. But according to a pair of reports, the White House is limiting other parts of the probe — including preventing agents from interviewing attorney Michael Avenatti’s client, Julie Swetnick. President Donald Trump says that’s not the case.

Separate reports over the weekend have suggested that the Trump administration is exerting control over the one-week investigation into Kavanaugh’s background, which Senate Republicans requested on Friday after possible swing vote Sen. Jeff Flake (R-AZ) called for a delay in the judge’s nomination process. President Trump subsequently instructed the FBI to conduct a “supplemental investigation” into Kavanaugh that “must be limited in scope,” as the Senate requested.

Per the Senate’s request, the FBI is to investigate “current credible allegations” against Kavanaugh.

NBC News, citing people familiar with the investigation, reported on Saturday that the FBI hasn’t been permitted to interview Swetnick, who alleges Kavanaugh and his friend Mark Judge sexually assaulted girls in high school and were present at a party where she was gang raped. The outlet reported that the White House counsel’s office has given the FBI a list of witnesses they are allowed to interview, instructions which translated to a “significant constraint” on the probe.

The Wall Street Journal on Saturday also reported that the White House’s parameters for the FBI probe didn’t include Swetnick because the White House doesn’t consider her accusations “credible.”

According to the NBC News’ report, if the FBI learns of others not on the pre-approved list who can corroborate witness’ accounts, it’s not clear whether agents will be able to reach out to them. That could have important implications for Ford, who alleges Kavanaugh sexually assaulted her while in high school, and Ramirez, who claims he exposed himself to her in college.

Kavanaugh has vehemently denied all of the women’s claims against him and appeared before the Senate Judiciary Committee on Thursday to refute Ford.

One curious feature of NBC News’ reporting is the way the administration instructed the FBI to handle its work on Judge. Ford alleges he was in the room when Kavanaugh drunkenly pinned her down, tried to take her clothes off, and covered her mouth when she screamed while they were at a party in the 1980s. He’s cooperating with the investigation.

In an attempt to help narrow the time frame of when the alleged incident took place, Ford told the judiciary panel on Thursday that six to eight weeks afterward, she went with her mother to a local Safeway supermarket in Potomac, Maryland and saw Judge, who was working there at the time. According to NBC News, “the FBI cannot ask the supermarket that employed Judge for records verifying when he was employed there.”

The FBI reportedly also isn’t able to look into why Kavanaugh’s account of his drinking at Yale differs from what former classmates say. Kavanaguh claims he wasn’t a heavy drinker, others say he was. Both Ford and Ramirez claim he was excessively drunk during the two incidents.

White House counsel Don McGahn is taking the lead on the White House’s dealings with the FBI investigation into Kavanaugh.

President Trump on Saturday evening refuted NBC News’ reporting, saying he wants the bureau to “interview whoever they deem appropriate, at their discretion.”

NBC News incorrectly reported (as usual) that I was limiting the FBI investigation of Judge Kavanaugh, and witnesses, only to certain people. Actually, I want them to interview whoever they deem appropriate, at their discretion. Please correct your reporting!

White House spokesman Raj Shah said in a statement to WSJ that the “scope of duration [of the investigation] has been set by the Senate” and that the administration was “letting the FBI agents do what they are trained to do.”

Trump on Friday while speaking to reporters said that he would defer to the Senate on how Kavanaugh’s nomination will play out. “I’m going to let the Senate handle that, they’ll make their decisions,” he said.

When talking with reporters on Saturday about Flake’s call for an investigation, Trump said the ordeal could be a “blessing in disguise.”

Avenatti, who represents Swetnick, has complained about the FBI’s apparent lack of interest in his client, saying Trump and Kavanaugh are “afraid of the truth” and promising to keep pushing anyway.

Trump has now determined that he and he alone will be the sole arbiter of whether a woman’s claims of sexual assault and misogyny are credible. Why even have an FBI investigation? I thought it was their job to make this determination. He and Kavanaugh are afraid of the truth.

Swetnick will appear in a pre-taped interview on Showtime’s The Circus on Sunday.

An ex-Facebook lawyer is Big Tech’s latest tie to the White House. Or is it?
Some Silicon Valley donors’ next political fight? Trying to oust California’s governor.
How to stop the next falling space rocket
The first days of ex-officer’s trial shed light on the moments leading to Botham Jean’s death
Facebook’s election woes are headed to Georgia
Did Jimmy Fallon just jump on the 'rage giving' train?