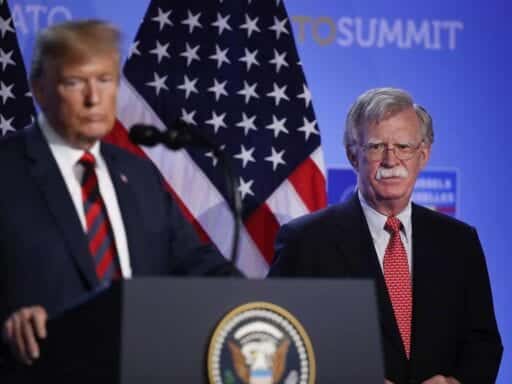 The Trump administration is setting a low bar for President Donald Trump’s Monday summit with Russian President Vladimir Putin. National Security Adviser John Bolton says the US isn’t going in looking for any “concrete deliverables,” and US Ambassador to Russia Jon Huntsman is confused why anyone is even calling this a “summit” at all — he would prefer “detailed conversation.”

In separate interviews on Sunday, both Bolton and Huntsman sought to moderate expectations about the Trump-Putin summit, which is set to take place on Monday in Helsinki, Finland.

The summit lands days after special counsel Robert Mueller indicted 12 Russian intelligence officers for interfering in the 2016 presidential elections and a harsh warning from Director of National Intelligence Dan Coats about the Russian cybersecurity threat. Democrats have called on Trump to cancel the summit altogether.

“How this conversation is going to go I think will be determined by the two parties,” Bolton said in an interview with Jonathan Karl on ABC’s This Week when asked whether Trump planned to hold Putin accountable for election meddling. “We have asked that the Russians have agreed that it will be basically unstructured. We’re not looking for concrete deliverables here.”

Huntsman struck a similar tone in an interview with Chuck Todd on NBC’s Meet the Press, where he clarified the summit is actually just a “first meeting between the two presidents” who have otherwise had “pull-asides” at a couple of international gatherings.

“Right now, there’s no trust in the relationship. And because of that, problem solving is practically impossible,” Huntsman said. “So, this is an attempt to see if we can defuse and take some of the drama, and quite frankly some of the danger, out of the relationship right now.”

Huntsman said it was “highly unlikely” that Trump would break with the United States’ and NATO’s longstanding condemnation of Russia’s 2014 annexation of Crimea, but he didn’t rule it out entirely. “The agenda is the president’s. Everything will be his call,” he said.

WATCH: Amb. to Russia @JonHuntsman on whether Crimea will come up in the Trump-Putin summit tomorrow says, “It’s the president’s call, but I think it’s highly unlikely that that’s going to emerge in their conversation.” #MTP pic.twitter.com/QmnaIBcab4

That small possibility is one of the more worrisome things that allies and national security will be watching. At the G7 summit in June, Trump reportedly told other world leaders that Crimea is Russian because the people who live there speak Russian. He was asked about his position on the peninsula in a press conference with United Kingdom Prime Minister Theresa May on Friday, and appeared noncommittal. He pointed out that Barack Obama was president when Russia annexed the peninsula from Ukraine, and when pressed about whether he would push to get Russia out, he responded, “We’ll see what happens, you know? I’m not bad at doing things.”

And at last week’s NATO summit, he said whether the US should recognize Russia’s Crimea annexation an “interesting question.”

Bolton told Karl on Sunday that recognizing Russia’s annexation of Crimea is “not the policy of the United States.”

When asked whether President Trump would ask Putin to extradite the 12 Russians hit by the Mueller indictment on Friday, Bolton shrugged off the idea as inane.

Huntsman was somewhat less dismissive, saying the FBI and embassy would “no doubt” work on it but acknowledging it’s unlikely. “Requests can be made,” he said. “That doesn’t necessarily mean that the Russians are going to follow through with it.”

The United States doesn’t have an extradition treaty with Russia as it does with other countries, but Trump can make the request, whether or not it’s likely to succeed.

Trump in an interview with CBS News set to air on Sunday said the idea of asking about extradition hadn’t occurred to him. “I hadn’t thought of that,” he said. “But I certainly, I’ll be asking about it.”

The president subsequently went on to blame Obama for Russian meddling and US inaction, which he also did on Twitter on Saturday.

Even Trump is setting the bar low

President Trump, who often makes a production of his self-proclaimed deal-making abilities, is also trying to relieve some of the pressure around the sit-down. “I go in with low expectations,” he said in the CBS News interview. “I’m not going in with high expectations.”

At the Friday press conference with May, Trump made a similar assertion. He declined to offer specifics on what exactly would be on the agenda beyond name-checking Syria, Ukraine, and denuclearization. “If I knew, I wouldn’t tell you because that would put us at a disadvantage,” he said when asked for specifics on Crimea.

“I hope it’s a detailed conversation where we might be able to find some overlapping and shared interests,” Huntsman said.

Bolton also declined to weigh in on whether Trump should trust Putin, who the intelligence community believes directed Russian interference in 2016.

On the election meddling front, Trump — who has publicly cast doubt on whether it even happened — doesn’t think he’ll get far with Putin. “I will absolutely bring that up,” Trump said during the press conference with May. “I don’t think you’ll have any, ‘Gee, I did it. I did it. You got me.’”

Trump on Sunday tweeted that no matter what he does in the Putin summit, he’ll be criticized by the Democrats and the media, “the enemy of the people.” In his book, he’s not setting a low bar, just lowering an artificially high one.

Heading to Helsinki, Finland – looking forward to meeting with President Putin tomorrow. Unfortunately, no matter how well I do at the Summit, if I was given the great city of Moscow as retribution for all of the sins and evils committed by Russia…

…know how to do is resist and obstruct! This is why there is such hatred and dissension in our country – but at some point, it will heal!