The White House released photos of Trump at work, raising more questions about his health 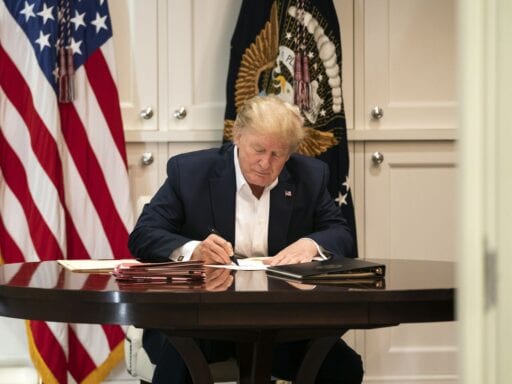 Amid mixed messages on the president’s health, the White House released photos of Trump working that some critics say were staged.

President Donald Trump, who has been receiving treatment for the coronavirus at Walter Reed National Military Medical Center since Friday, released two photographs late Saturday meant to suggest that he is recuperating rapidly, but those images — which came following a peculiar press conference and mixed health assessments from White House staff — have been met with scrutiny, undercutting the message the president hoped to send.

The photos began to draw criticism on social media shortly after their release, with many users pointing out that it is unclear what Trump is actually doing in the images. In the first, he appears to simply sign his name in the center of an otherwise blank piece of paper. In the second, the folders and a black binder appear to be empty.

Journalist Jon Ostrower seemed to suggest the photos were staged, reporting that data embedded in the image files showed they were taken just 10 minutes apart:

The photos released by the WH tonight of the president working at Walter Reed were taken 10 minutes apart at 5:25:59 pm and 5:35:40 pm ET Saturday, according to the EXIF data embedded in both @AP wire postings that were shared by the White House this evening. pic.twitter.com/EzeqIkGdf7

Questions over the images came amid confusion over the state of Trump’s health. The president delivered a brief address Saturday evening on Twitter, in which he spoke about his eagerness to get back to the campaign trail and his normal work schedule, telling the public, “I’ll be back, I think I’ll be back soon.”

And in brief remarks in front of Walter Reed on Saturday, White House physician Dr. Sean Conley said Trump’s medical team was “extremely happy” with Trump’s progression, while Trump surrogates making the rounds on the Sunday morning talk-show circuit said the president is “doing well” and “feels very well.” Also on Sunday, Trump’s medical team said he may be discharged from Walter Reed as early as Monday.

But these positive assessments have been directly undercut by members of the president’s own staff.

“The next 48 hours will be critical in terms of his care,” the source said. “We’re still not on a clear path to a full recovery.”

And Saturday night, Trump’s doctor said the president “not yet out of the woods.” And Sunday Conley said there was a period of time on Saturday where Trump’s oxygen levels dropped, before eventually returning to normal (he declined to elaborate as to whether the president needed supplemental oxygen to return his levels to normal).

These statements would suggest that Trump may not be doing quite as well as he and some of his team have said.

Adding to the confusion is the fact that Conley himself presented a new, contradictory timeline of Trump’s illness on Saturday — indicating that he was diagnosed with the virus a day and a half earlier than first reported — and refused to directly answer questions about whether Trump has received supplemental oxygen. A doctor at Walter Reed, Brian Garibaldi, also suggested that Trump had begun treatment for Covid-19 earlier than had been reported. The White House said later on Saturday that Conley had misspoken, but the incident had already cast more doubt on the statements of a White House known for lying.

These images were meant to provide evidence that, despite the mixed messages Saturday afternoon, positive assessments could be trusted and the president is on the mend. But missteps ultimately made them appear questionable, if not deceptive.

Trump has portrayed himself as a strong leader

Like all public figures, Trump has historically been image conscious. And his brand of leadership and campaigning tends to focus on projecting a sense of strength and forcefulness.

This was a central focus of his 2016 election campaign, as exemplified by one advertisement in which the Trump campaign portrayed his then-opponent, Hillary Clinton, as sick and weak. Following footage of ISIS fighters training and North Korean tanks, Clinton is shown coughing and tripping.

“Hillary Clinton doesn’t have the fortitude, strength or stamina to lead in our world,” a narrator intones.

The tagline of that ad was: “Donald Trump will protect you. He is the only one who can.”

And throughout this year’s campaign, the Trump team has turned to this playbook again, attempting to portray opponent Joe Biden — who is three years older than the president — as old and feeble.

It may be for this reason that, since news about Trump’s confirmed Covid-19 case became public on Thursday night, Trump and his team have worked to continue promoting a vision of Trump as robust and healthy, and as not succumbing to an illness that can significantly weaken a person, causing them to struggle to breathe, stand, and walk.

For example, Trump’s daughter Ivanka shared one of the disputed White House images with the caption, “Nothing can stop him from working for the American people. RELENTLESS!”

Other members of Trump’s team have been promoting a rosy vision of his health. On Fox News Sunday, Steve Cortes, a senior advisor on Trump’s reelection campaign, said Trump is “doing well” and “upbeat.”

And Trump’s Twitter account has also shared messages of optimism. On Saturday afternoon, Trump wrote, “I am feeling well!”

He also expressed the importance of portraying an image of strength to his personal attorney and friend, former New York mayor Rudy Giuliani, who said the president told him, “I’m going to beat this” and “I feel I could go out and do a rally.”

Giuliani also said Trump told him that he has continued life as normal the last six months — during a time when more than 209,000 Americans died of Covid-19, and lawmakers and citizens continue to fight over taking basic precautionary measures — in order to be a model of fearlessness.

“I am the president of the United States. I can’t lock myself in a room,” Giuliani said Trump told him. “I had to confront [the virus] so the American people stopped being afraid of it so we could deal with it responsibly,” he said.

On Saturday, Conley highlighted the fact that Trump is in a high-risk category for a more severe Covid-19 reaction, because he is above the age of 70, male (men appear to be more at risk than women), and overweight.

In the face of this risk, posed by an illness that has killed more than one million people worldwide in less than 10 months, Trump is unable to maintain complete control over his image. But, as with so many things about this presidency, people looking at the photos and videos of his hospital stay will largely continue to see what they wish to see.

Why Beethoven’s 5th Symphony matters in 2020
What Biden can do to fix Trump’s Covid-19 mess
Why we need a more forgiving legal system
Maxine Waters isn’t standing down: “If you shoot me, you better shoot straight”
North Carolina Republicans’ audacious power play, explained
Bill Cosby is in prison. But the first real #MeToo trial hasn’t happened yet.