The White House went dark as protests raged outside 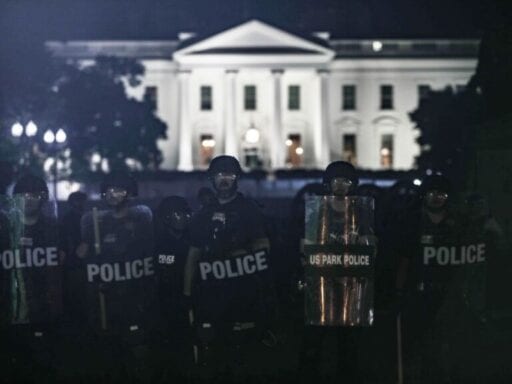 Share
Loading...
Police take security measures near White House during a protest over the death of George Floyd, an unarmed black man who died after being pinned down by a white police officer in Washington, United States on June 1, 2020. | Yasin Ozturk/Anadolu Agency via Getty Images

It’s symbolic of Trump’s leadership during this highly tense time.

As the nation was rocked by waves of protests across the country, the White House went dark on Sunday night.

Photos on social media showed the White House with nearly all its exterior lights outs. Although it’s unclear why the administration turned the lights off, the dark building starkly contrasted to the fires burning around the city. It also symbolized a response to what was happening outside the White House gates, as protesters continued to mourn the death of George Floyd, a black man killed last week by a police officer who pinned Floyd’s neck to the ground with his knee.

The nation’s capital is legitimately on fire in every direction. This is unreal. pic.twitter.com/hXNJ0LticL

It was also reported last night that the president took shelter in the White House bunker on Friday as crowds gathered outside of the White House that evening to protest police violence against the black community. Peaceful gatherings took a turn after dark as protesters clashed with law enforcement and lit fires near the building.

Rattled by the escalating tension outside the gates, the Secret Service briefly took Trump to the Presidential Emergency Operations Center, an underground bunker that is used to shelter presidents during threatening situations, on Friday for nearly an hour, according to The New York Times. The Associated Press reported that Trump and his family were shaken by the experience and the size of the protests. Although it’s unclear whether Melania and Barron Trump were also taken to the bunker, security protocol would have required them to be sheltered as well.

In the past, the bunker has been reserved for situations like terrorist attacks: former President George W. Bush and Vice President Dick Cheney had taken shelter in the bunker following the Al Qaeda attacks on September 11, 2001.

Hours after the protests dispersed outside the White House on Friday, Trump went to Twitter to lash out against the protesters. After thanking the Secret Service for their protection and saying that he “couldn’t have felt more safe,” he implied that protesters would have been attacked with “the most vicious dogs, and most ominous weapons” if they had set foot inside the White House.

….have been greeted with the most vicious dogs, and most ominous weapons, I have ever seen. That’s when people would have been really badly hurt, at least. Many Secret Service agents just waiting for action. “We put the young ones on the front line, sir, they love it, and….

Following his series of tweets, Trump also criticized protesters at NASA’s Kennedy Space Center in Florida on Saturday, where he celebrated the launch of the SpaceX rocket, according to CNN. He also briefly commented on his support for the police and condemned protesters. These are the most in-depth remarks on the protests he’s given in public so far, outside of blaming the media, antifa, and Democrats.

For many, Trump’s trip to the bunker is representative of his leadership during the protests: to stand back and remain detached from the chaos. Despite the escalating tension, he has yet to formally address the nation.

By hiding from protesters, Trump is also going against his own macho persona he’s highlighted during his Covid-19 response. Although he may have projected an image of being too masculine to wear a mask in front of the public, he hasn’t shied away from staying behind the doors of the White House as protesters rage outside.

Brett Kavanaugh and the hidden cost of male bonding
One group tries to lower the volume on the high-decibel noise dividing a polarized nation
A detailed timeline of all the ways Trump failed to respond to the coronavirus
Here’s why you can’t play Fortnite’s new season on your iPhone
Vox Sentences: Weinstein wants to settle (again)
Nevada promises its caucuses will go better than Iowa’s

Poll: Half of Americans who lost their job during the pandemic still don’t have one