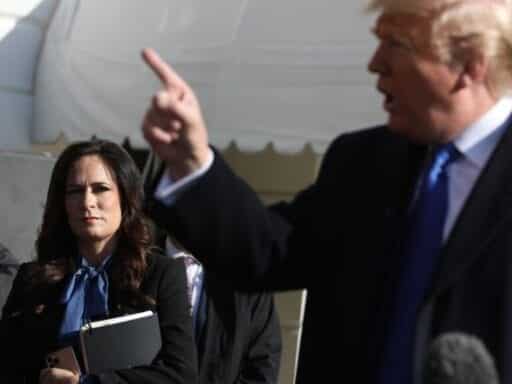 Trump attacked a widow by denigrating her dead husband. The White House is portraying Trump as the real victim.

Trump’s remarks on Wednesday evening during his rally in Battle Creek, Michigan, were meant as a shot at Dingell’s widow — Rep. Debbie Dingell, who now serves in John’s old House seat — because she voted in favor of two articles of impeachment that same day.

Referring to a phone call Trump had with Debbie after John passed away last February, Trump said, “She calls me up. It’s the nicest thing that’s ever happened. ‘Thank you so much. John would be so thrilled. He’s looking down. He’d be so thrilled. Thank you so much, sir.’” (Debbie Dingell claims Trump’s account is false and that he in fact called her.)

But Trump then suggested that heaven might not be where John Dingell, a World War II veteran who became the longest-serving Congress member in the country’s history, ended up.

“I said, ‘That’s OK, don’t worry about it.’ Maybe he’s looking up, I don’t know,” he said, prompting audible groans from the audience. “But let’s assume he’s looking down.”

Debbie Dingell responded to Trump with a tweet addressed directly to him in which she noted that she’s “preparing for the first holiday season without the man I love” and said his remarks “brought me down in a way you can never imagine and your hurtful words just made my healing much harder.”

Trump’s comments prompted bipartisan condemnation and calls for him to apologize. But on Thursday, White House press secretary Stephanie Grisham and deputy press secretary Hogan Gidley went on TV and made clear that the president intends to do no such thing.

On ABC’s Good Morning America, host George Stephanopoulos asked Grisham, “Why do you think the president said that last night?” She responded by describing Trump as a “counter-puncher.”

“As we all know, the president is a counter-puncher. It was a very, very supportive and wild crowd,” she said. “He was just riffing on some of the things that had been happening the past few days.”

STEPHANOPOULOS: Why did Trump joke about John Dingell being in hell at his rally last night?

STEPHANIE GRISHAM: “As we all know, the president is a counter-puncher. It was a very supportive and wild crowd. He was just riffing.” pic.twitter.com/Wv8BuP8t3u

When Gidley was asked a similar question during a subsequent Fox News appearance, he went even further in trying to portray Trump — not the Dingells — as the victim.

“No matter what the president says people are going to parse it apart, try and tear it apart, and focus on the most negative aspects of it,” Gidley said, as if there were any positive aspects to Trump’s comments.

“He’s been under assault ever since he took the oath of office. Even before — for the last several years,” Gidley continued. “And so, look, it’s understandable that someone’s frustrated by the fact that you have 93 percent negative news coverage against you, even though you have so many successes on behalf of the American people.”

WH spox Hogan Gidley responds to Trump joking about John Dingell being in hell by trying to make *Trump* the victim: “No matter what the president says…people are going to parse it apart, try & tear it apart & focus on the most negative aspects of it…he’s been under assault” pic.twitter.com/gV3uEllRkS

Referring to a similar attack Trump made against the late Sen. John McCain earlier this year, Pelosi said the president “is clearly insecure when it comes to statespersons.”

“Let us pray for the president,” she added. “What the president misunderstands is that cruelty is not wit … it’s not funny at all. It’s very sad.”

Pelosi on Trump suggesting John Dingell is in hell: “Let us pray for the president … think of what he said about John McCain & his supporters just overlooked that. Now John Dingell. What POTUS misunderstands is that cruelty is not wit … it’s not funny at all. It’s very sad” pic.twitter.com/WqtQwEcK6p

Just after Pelosi wrapped up, House Minority Leader Kevin McCarthy held a news conference in which he dodged questions about Trump’s comments but described John Dingell as a “very bright individual” who “made a great contribution to America.”

Trump, for his part, ignored repeated questions about whether he’ll apologize to Dingell during a media availability at the White House on Thursday afternoon. But if past Trump scandals have taught us anything, it’s that he is far more likely to escalate his attacks than he is to express any sort of remorse.

Elon Musk dethrones Jeff Bezos as the world’s richest person
What’s at stake if Trump gets to replace Justice Ruth Bader Ginsburg
From midlife crises to cowboy dreams: August’s biggest new albums
“I am very scared”: What it’s like for pregnant essential workers in the pandemic
Comey: “No doubt” that Trump would face obstruction charges if he wasn’t president
He was once called a “danger to Mexico.” Now he’s its next president.