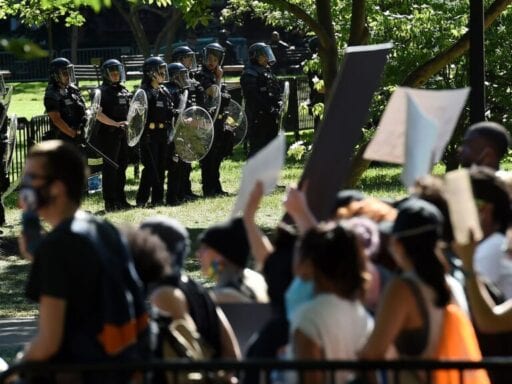 Share
Loading...
US Park Police stand watch inside Lafayette Square near the White House in Washington, DC, on June 1, 2020, as demonstrators protest the death of George Floyd. | Olivier Douliery/AFP via Getty Images

And the White House still won’t answer the most important question: Who ordered the attack?

Just minutes before President Donald Trump was scheduled to give a speech in the White House Rose Garden about the anti–police brutality protests, law enforcement officers outside the White House launched tear gas at hundreds of peaceful protesters gathered in neighboring Lafayette Square.

It produced a shocking scene of federal officials shooting a weapon banned from warfare at Americans. The crowd scattered, allowing Secret Service, National Guard, and Park Police personnel to make a path for Trump and his team to visit a nearby church after his address.

That led to widespread speculation that Trump or someone else at the White House had ordered the tear gas attack solely to give Trump the photo op he wanted with his team at St. John’s Episcopal Church, a recent cause célèbre among the right after its basement was partially burned during the unrest on Sunday night.

All of this seemed surreal, and deeply disturbing if true. Did the White House purposely have federal officials shoot at American citizens with tear gas solely to benefit Trump?

So I asked the White House, via email, a simple question: “Do [you] know who gave the order to clear the crowd in Lafayette Square with tear gas?”

Here’s the response from Judd Deere, a White House spokesperson: “The perimeter was expanded to help enforce the 7:00 pm curfew in the same area where rioters attempted to burn down one of our nation’s most historic churches the night before. Protesters were given three warnings by the US Park Police.”

This explanation is suspect for several reasons — the most important being that, although DC Mayor Bowser had ordered a curfew for DC starting at 7 pm, video of the incident clearly shows that law enforcement fired the tear gas well before then.

Second, the statement notably doesn’t address my actual question, which was “who gave the order to clear the crowd in Lafayette Square with tear gas?”

And third, the statement explicitly mentions the church, which seems to signal that the goal of the whole ordeal was to get Trump to St. John’s no matter what.

I followed up with Deere in an email, asking two pointed questions: “1) The tear gas was shot well before 7pm. Was it necessary to launch?” and (again), “2) Who ordered the tear gas launch?”

“You have my statement,” he responded. “I have nothing further to share.”

Let’s be clear about what this means: The White House is explicitly not denying that Trump or another administration official greenlit the tear gas attack, and there’s no clear explanation why anyone thought using tear gas on peaceful protesters was warranted just so the president could have a photo op.

6 Native leaders on what it would look like if the US kept its promises
Trump and the Navy are on a collision course
The Vox guide to navigating the coronavirus crisis
Harvard historian Jill Lepore on what “Why We’re Polarized” gets wrong
Despite coronavirus, 2 states are holding GOP primaries Tuesday
Democrats win the Senate — by the slimmest margin possible