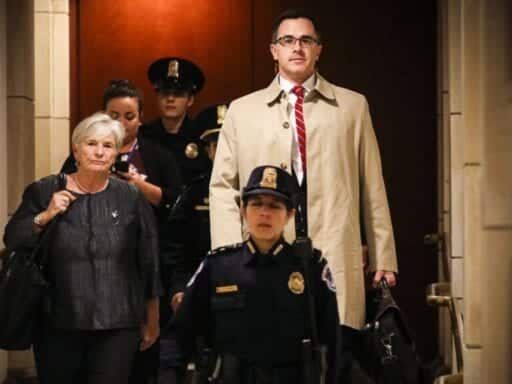 Tim Morrison tried not to make the president look bad. He failed.

Tim Morrison, the top White House aide for Europe and Russia policy, just placed another log on the roaring impeachment fire threatening to engulf President Donald Trump. The problem, though, is he clearly tried to avoid that exact outcome.

In his testimony to the House Democrat-led impeachment inquiry on Thursday, Morrison backed up what other key witnesses have previously testified to: that Trump tried to strong-arm Ukraine’s president into Trump’s political rivals by withholding US military aid to the country. But Morrison described events in a way that wouldn’t torch the president, trying to make the scheme not seem so bad.

Speaking about a meeting between US ambassador to the EU Gordon Sondland, a Trump donor tasked with leading Ukraine policy, and a top Ukrainian official, Morrison said “my recollection is that Ambassador Sondland’s proposal to [Andrey] Yermak was that it could be sufficient if the new Ukrainian prosecutor general, not President Zelensky, would commit to pursue the Burisma investigation.” William Taylor, the top US diplomat in Ukraine, recounted last week that Sondland said Zelensky had to announce the probe.

Burisma is the Ukrainian gas company where Hunter Biden — Joe’s son — served on the board. Trump and his allies falsely claim that the former vice president used his power to stop a previous investigation into the company to protect his kin. For Sondland to say that US support for Ukraine was contingent upon a commitment to reopen a probe into Burisma, then, is a clear quid pro quo: Look into my rival’s family, and you’ll get your money.

But Morrison made it pretty clear that he wasn’t out to bash Trump.

When discussing the infamous call between Trump and Zelensky on July 25, in which Trump asked his counterpart for a “favor” after a discussion of sending weapons to Ukraine, Morrison held his fire. “I was not concerned that anything illegal was discussed,” he said, adding that, to the best of his recollection, the partial readout of the call released by the White House “accurately and completely reflects the substance of the call.”

Morrison, who announced Wednesday that he would soon leave the White House, also said he “promptly” told White House lawyers about the call, fearing that if it were to become public, it would fuel partisan tensions and thereby jeopardize US-Ukraine relations.

Whether or not Trump did anything “illegal” isn’t the point, though. Pressuring a foreign government to investigate a domestic political rival could easily be seen as an abuse of power — an infraction many Democrats believe is an impeachable offense. Morrison, then, may have tried to protect the president, but he only ended up making matters worse.

As Morrison testified, the House voted Thursday to officially open an impeachment inquiry largely along partisan lines, which means there will soon be public hearings that could air all of the president’s dirty laundry on live television.

Morrison didn’t want his testimony to hurt Trump. It did.

Rumors swirled for days that Morrison would back up last week’s testimony by Taylor, who himself laid out a clear quid pro quo between Washington and Kyiv. Morrison did, in fact, corroborate Taylor’s account.

Taylor cited Morrison 15 times in his opening statement, noting they had conveyed their mutual concern at the unfolding Ukraine scheme.

“I can confirm that the substance of his statement, as it relates to conversations he and I had, is accurate,” Morrison told investigators. However, Morrison noted two differences.

First, in Taylor’s telling, Sondland had relayed to Yermak that President Zelensky would have to be the one to publicly announce the opening of a Burisma probe; in Morrison’s accounting, Ukraine’s top prosecutor making the announcement would have been enough to satisfy Trump’s request.

Second, Morrison noted that he met a top Ukrainian official in a hotel business center, not a hotel room, as Taylor recounted.

Those disparities are worth noting, but they don’t change the fundamental nature of Morrison and Taylor’s accounts. That’s bad news for Trump, as testimony after testimony has only gotten worse for the president.

Sondland has told lawmakers that the Trump-led pressure campaign amounted to a quid pro quo. And Lt. Col. Alexander Vindman, who works in the White House on Ukraine policy and was also on the July 25 call, told Congress on Tuesday that a Trump-Zelensky meeting and the military support were “contingent” on Kyiv initiating those investigations.

Republicans have resorted to claiming Democrats aren’t following the right impeachment procedure instead of defending Trump on the merits of his case. And there’s one good reason for that: He doesn’t have a strong case as a parade of administration insiders say the president did something wrong.

These people put their jobs on the line to tell the truth, as Morrison’s imminent departure from the White House indicates. But Trump may also end up in danger of losing his.

The attack on the Capitol may have also been a superspreader event
Why Fox News is at the center of the impeachment story
Startups still love Slack but big companies are bailing
20 years after Columbine, the guns are still the problem
Why John Roberts won’t save the impeachment trial from partisanship
Do the Oscars’ new rules mean no more movies about white people?