The white lie we’ve been told about Roman statues 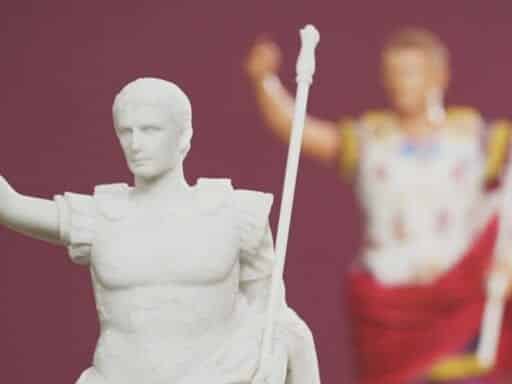 When you think of the ancient world, you probably picture towering buildings of white marble adorned with statues, also made of white marble. You’re not alone — most people picture the same thing. But we’re all wrong.

Ancient buildings and sculptures were actually really colorful. The Greeks and Romans painted their statues to resemble real bodies, and often gilded them so they shone like gods. So why is seemingly every museum on planet Earth full of white marble sculptures?

It’s partly an honest mistake. After the fall of Rome, ancient sculptures were buried or left in the open air for hundreds of years. By the time the Renaissance began in the 1300s, their paint had faded away. As a result, the artists unearthing, studying, and copying ancient art didn’t realize how colorful it was supposed to be.

But white marble couldn’t have become the norm without some willful ignorance. Even though there was a bunch of evidence that ancient sculpture was painted, artists, art historians, and the general public chose to disregard it. Western culture seemed to collectively accept that white marble was simply prettier.

Today, art history is more concerned with accuracy than it is with what might look better, so teams of researchers use a combination of art and science to painstakingly create reconstructions of ancient statues, showing us the true colors of classical antiquity.

Watch the video above to learn more. You can find this video and all of Vox’s videos on YouTube. And if you’re interested in supporting our video journalism, you can become a member of the Vox Video Lab on YouTube.