“The woman in Michigan”: How Gretchen Whitmer became a target of rightwing hate 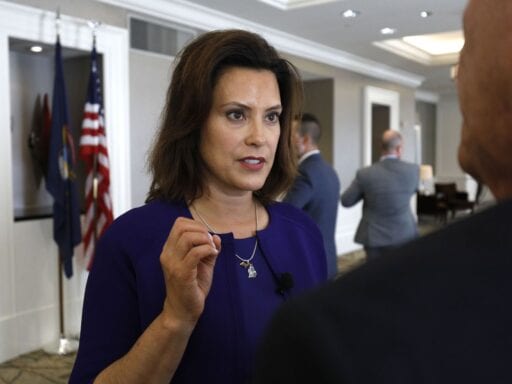 An alleged plot to kidnap the governor is part of a larger pattern of misogyny.

Earlier this year, a man named Adam Fox recorded a video in which he called Michigan Gov. Gretchen Whitmer a “tyrant bitch” for closing the state’s gyms.

Now, he and five other men known as the “Wolverine Watchmen” have been arrested on conspiracy charges, accused of plotting to kidnap the governor in retribution for her actions to limit the spread of Covid-19.

It’s an extreme, and frightening, version of the attacks Whitmer has experienced for months. Though leaders from New York City to London have seen protests and pushback against restrictions, Whitmer has been a particular target for rightwing protesters — and for President Trump, who dismissively referred to her as “the woman in Michigan” this spring before introducing the more colorful “Gretchen ‘Half’ Whitmer.”

Whitmer became a lightning rod for protesters in part because, as the governor of a hard-hit state, she instituted restrictions early. She’s also been highly visible in the media, especially when she was floated as a possible running mate for Democratic presidential nominee Joe Biden.

But there’s another reason Whitmer has been the recipient of a particular kind of hatred: her gender. Whitmer isn’t just a Democrat or a governor telling people what to do — she’s also a woman telling people what to do. That’s never been particularly popular with a certain subset of Americans, and it’s especially unpopular now that Trump and others have introduced a gendered element into the politics of Covid response, peddling the idea that it’s manly to ignore the risk of the virus.

Indeed, it’s no accident that Whitmer is being called a tyrant and a bitch. The attacks on her feed into age-old stereotypes about women in power — stereotypes that are especially dangerous now as they undermine some of the very leaders who are trying to stop the spread of Covid and keep Americans safe.

Whitmer has been the subject of rightwing ire for months

The right-wing rage against Whitmer’s Covid restrictions started back in mid-March, when the governor said in a CNN interview that she had sought help from the federal government in obtaining PPE and testing equipment for her state — then the fourth hardest-hit in the country — but had not received it. Trump fired back on Fox News, saying, “I don’t know if she knows what’s going on, but all she does is sit there and blame the federal government.” Then, in a White House briefing on March 27, he claimed that he had instructed Vice President Mike Pence, then in charge of the country’s Covid response, not to call “the woman in Michigan.”

The same day, he called her “Gretchen ‘Half’ Whitmer” on Twitter.

I love Michigan, one of the reasons we are doing such a GREAT job for them during this horrible Pandemic. Yet your Governor, Gretchen “Half” Whitmer is way in over her head, she doesn’t have a clue. Likes blaming everyone for her own ineptitude! #MAGA

Then, in April, Whitmer introduced new restrictions to battle the virus, including a requirement that large stores close off sections devoted to gardening supplies and furniture. Conservatives in the state said the restrictions felt arbitrary, and on April 15, some 3,000 protesters demonstrated in the state capital of Lansing in what they called “Operation Gridlock.”

The language of many protesters, however, went beyond mere opposition to restrictions on big-box stores. The messages took on misogynistic overtones, as demonstrators carried signs comparing Whitmer to “a tyrannical queen and an overbearing mother,” according to MLive. Some chanted “lock her up!” — Trump’s favorite rallying cry against Hillary Clinton.

Trump, meanwhile, cheered the protesters on, tweeting “LIBERATE MICHIGAN” on April 17. Perhaps not surprisingly, protests continued to escalate. On April 30, armed protesters, many not wearing masks, crowded into the state Capitol and tried to get access to the House floor, as Vox’s Katelyn Burns reported. Some chanted “lock her up” and “heil Whitmer.”

At the MI Capitol pic.twitter.com/IuYoBhstIg

In May, the state had to close its Capitol and adjourn its legislative session due to a planned protest grimly titled “Judgment Day” as well as death threats against Whitmer.

And in the summer, according to an FBI affidavit released on Thursday, Fox and his associates began planning to kidnap the governor. In a video streamed to a private Facebook group on June 25, Fox referred to her as “this tyrant bitch” and “complained about the judicial system and the State of Michigan controlling the opening of gyms,” according to the affidavit.

On a July call recorded by the FBI, he discussed a plan to kidnap the governor when she was traveling to or from her vacation house or official summer residence.

“Snatch and grab, man,” Fox said, according to the affidavit. “Grab the fuckin’ Governor. Just grab the bitch.” The repetitive language might resonate uncomfortably for some Americans, who recall Trump’s boast on the Access Hollywood tape that he could grab women “by the pussy.”

After the kidnapping, Fox said he and others would take Whitmer to a secure location in Wisconsin for a “trial.”

Fox and five others were arrested this week, as Vox’s Andrew Prokop reports, before any plan could come to fruition. But the comments recorded in the affidavit were the culmination of a months-long pattern of attacks on Whitmer, fueled in part by the president, that cast her as a tyrannical leader illegitimately wielding power over Michigan citizens.

Trump even added fuel to the fire on Thursday night, saying in a rambling interview with Fox’s Sean Hannity, “I see Whitmer today, she’s complaining, but it was our Justice Department that arrested the people she was complaining about.”

“She goes and does her little political act, and she keeps her state closed,” Trump went on. “What she’s doing is a horrible thing to the people.”

Whitmer isn’t the only governor Trump has criticized — back in April, he also fired off “LIBERATE” tweets about Minnesota and Virginia, other states with Democratic leadership.

She’s also not the only public official to face pushback from lockdown skeptics. Indeed, Fox spoke at one point of the possibility that other states might overthrow their governors as well, according to the affidavit: “Everybody takes their tyrants.”

But Whitmer has received a degree of personal attention, both from the president and from opponents in her state, that her male counterparts haven’t necessarily experienced. That may be because, in addition to opposition to lockdown measures, she’s running up against the still widely held belief that any woman seeking or holding power is treasonous, underhanded, or illegitimate.

“She fucking goddamn loves the power she has right now,” Fox said at one point. “She has no checks and balances at all.”

It was reminiscent of complaints against other female leaders or candidates. For example, Fox News commentator Harlan Hill tweeted during the vice-presidential debate on Wednesday that Sen. Kamala Harris “comes off as such an insufferable lying bitch” (Fox News later said he would no longer appear on the network). Asked to comment on the tweet by Mediaite, he doubled down, saying, “I stand by the statement that she’s an insufferable power-hungry smug bitch.”

Atlanta Mayor Keisha Lance Bottoms, meanwhile, has received intense criticism for imposing restrictions in the face of Covid, including a lawsuit by Georgia Gov. Brian Kemp, a Republican, that named her personally. In an interview earlier this year, Bottoms wondered whether she was singled out in part because she is a Black woman and the mayor of a majority Black city. “There were other cities in our state who instituted mask mandates and he did not push back against them,” Bottoms said. “I don’t know if it’s perhaps because they were led by men or if it’s perhaps because of the demographic in the city of Atlanta.”

Historically, female leaders and candidates around the world have often been portrayed as treacherous, two-faced, corrupt, or power-hungry — “willing to do anything at all costs to win,” as Farida Jalalzai, a political science professor who studies women leaders, put it to Vox in January. Indeed, women seeking any political power at all, even the right to vote, have faced stigma — as Vox’s Li Zhou reports, the use of the word “bitch” in literature began to increase after the passage of the 19th Amendment.

And now, women like Whitmer who attempt to use their power to get Covid under control may be running up against those stereotypes. That’s especially true since Trump and his supporters have repeatedly sent the message that the correct — and manly — thing to do is to ignore the virus, refuse a mask, and carry on as normal, regardless of whether you infect yourself or anyone else.

When women like Whitmer try to restrict people’s ability to spread a deadly virus, then, according to far-right protesters, they’re infringing on men’s freedom to be men.

Fox and his associates may be under arrest, but that messaging continues with Trump taking off his mask upon his return to the White House earlier this week and telling Whitmer she should be grateful that “our Justice Department” kept her from getting kidnapped.

As long as such rhetoric continues, it’s going to be hard for Whitmer and other female leaders to do their jobs — which may be exactly what Trump wants.

Biden can fight climate change, guarantee housing, and halve poverty — without the GOP
Jared Kushner reportedly paid little to nothing in taxes for years — and it was completely legal
Apple and Google want to turn your phone into a Covid-tracking machine
The tech sector is finally delivering on its promise
South Korea wants to lift sanctions on North Korea. That could kill Trump’s nuclear plan.
Algeria’s forgotten protesters