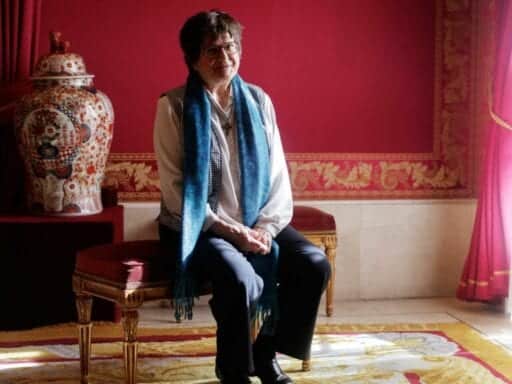 Sister Helen Prejean’s Dead Man Walking was a milestone. Now she’s talking about the justice system, sexism in the church, and more.

In 1982, a Catholic nun from Louisiana began writing letters to a man on death row who had been convicted of rape and murder. They began a correspondence. And when she realized he didn’t have visitors, she visited. But she never thought he would be executed — it hadn’t happened in the state in 20 years.

The nun was Sister Helen Prejean, and her relationship with Pat Sonnier and witness to his state-mandated death became the subject of Dead Man Walking, her 1993 book that inspired the popular film by the same name, in which Susan Sarandon played Prejean in an Oscar-winning role.

Today, Sister Prejean is perhaps the greatest single advocate against the death penalty.

In River of Fire: My Spiritual Journey, Prejean’s new memoir, the nun chronicles her personal transformation that led to her meeting Sonnier — from someone who looked to God for answers to someone who believed God’s work should be carried out through active community engagement. It’s a transformation that, she tells me, is “still happening.”

I talked to Prejean, now 80, about how the church’s changes in the ’60s created opportunities for nuns, about the deep structural problems with the criminal justice system, and about why many Americans are turning against the death penalty.

There was a point in your life where you say you shifted from a kind of personal religious journey to a relationship with God that involved engaging with the outside world. What happened?

Before, my spiritual life was about directly praying that God would settle the big problems of the world and help suffering people. You’ve got to understand, I’m operating in a little cocoon. A little microculture of someone who was coming from a well-to-do family, out in the suburbs and in the Catholic institutions where nuns would teach. I was really separated from actual poor people, even in my own city of New Orleans.

Marie Augusta Neal, this great nun, said that Jesus could help the poor. Well, I’d been meditating on Jesus my whole life … “If you’re poor, God bless you. You share more in the sufferings of Christ. One day you’d have a great reward in heaven.” Look how superficial it was. So that talk jolted me and led me to move into the inner-city housing project in New Orleans and work at a place called Hope House. It was the first time African American people were my peers. I met them, shared with them, and learned from them.

That “cocoon” you say you were living in before that … did the church also encourage it?

Yeah, they had a club called the “cocoon keepers.” Well, Vatican II [an assembly of Roman Catholic religious leaders who met between 1962 and 1965 to establish a new foundation for the church, at the behest of Pope John XXIII] was part of a huge ecumenical council. It opened the doors to saying that being a Catholic, being Christian, is not simply to go to Mass on Sunday and saying you believe in the creed. It’s getting out there and responding to the needs of the people — which Pope Francis really embodies when he says the church should be a “field hospital” where the wounded, suffering people are. So we started the church on a trajectory to move out into the world and to work for social justice.

For those who aren’t familiar with Dead Man Walking, in 1982, you began writing letters to a man on death row and you eventually witnessed his execution. How did this change you?

Incrementally. First I wrote letters. Then I realized he didn’t have visitors. I had the instinct to visit him. I did this for two and a half years. The next thing I know, he’s ratcheting up to execution. [The state of Louisiana] hadn’t had an execution in 20 years. I talk to my students about sneaky Jesus. You think, “Yeah, I’ll just write a few letters.” You never dream somebody’s going to be executed, much less that you were going to witness that.

You can’t witness a person being rendered completely defenseless in a premeditated protocol of death, strapped down and killed, and walk away from that saying, “I think I’m going to do something else in my life.” Because you’ve been a witness, you’ve been drawn in. So then the moral imperative begins.

In 1993, when the book was published, the public was supportive of the death penalty. How has public opinion shifted since then?

Dead Man Walking, the film, changed the way films were done; they were much more reflective. “Wait a minute, what does this mean that we’re going to give the state this power?”

Now, over 150 innocent people who were all in the system, condemned to death, went to trial, [and were] found guilty [were wrongly convicted]. DNA helped open the door. Most of that is prosecutorial misconduct. So the staggering number of mistakes we made enters into that.

Then the cost factor. You are throwing literally millions of dollars to execute one person, and to what end? Sometimes it doesn’t even happen. Of all the death penalties that were sought in Louisiana, over 80 percent of them never come to execution, because prosecutors are overzealous, they’re hiding evidence or whatever.

On one level, people are saying it’s not worth it. So more and more, the talk was, to be tough on crime, [we should] be smart about crime and begin putting those resources into community policing — actually making communities more safe.

Plus, the data [shows] that the death penalty doesn’t deter anybody.

Support for the death penalty, as of a couple of years ago, dropped below 50 percent when you [asked], “Death penalty or life imprisonment?” [The most recent data, from 2018, has support at 54 percent.] Most people don’t want to kill people or trust the government to do it, and so that is a shift.

What about the shift, specifically, within the Catholic Church?

I’ve been to all 50 states to talk to people, to bring them close and just say, “Look at this.” So first, I’m in Catholic parishes. Occasionally, I bump into a bishop. I’ve found that most bishops didn’t want to touch the death penalty with a 10-foot pole. But the people begin to get it. And so then I started bumping into a few popes along the way.

And there was a man, Joseph O’Dell, in Virginia. I was with him when he was executed, and Italians got interested in his case. Pope John Paul II heard about it in Rome. And so I wrote him a letter and said, “When a man turns to you and says, ‘Sister, please pray God holds up my legs,’ while we’re making this walk to his death, he’s completely defenseless. He’s strapped down in an electric chair or lethal injection, and he’s killed. Does the church only uphold the dignity of innocent life? What about the guilty? Where is the dignity in that death? Especially when we can defend people through prisons. We don’t have to imitate the killing and kill people.”

Pope John Paul was the first to recognize that when he gave a talk in St. Louis [in 1999]; he held that up. Dignity doesn’t just belong to the innocent. The pope, of course, has a heart. He has a bent for compassion and justice.

Well, let’s just say dialogue bumps along slowly. It took 1,600 years in the church to reach a point, on August 2, 2018, for Pope Francis to declare, unequivocally, we can never put government in charge of deciding that some of their citizens can be killed, that killing is the solution, and we are in charge of setting up the system whereby we choose who makes this happen. There were too many broken things in the system.

What if there weren’t “too many broken things in the system”? Is it a problem with the system or the death penalty itself?

There’s a direct connection between those two. The massive imprisonment of poor people, and especially people of color, is directly connected to the death penalty. Who is mainly selected for death in the United States? Eighty percent of people [on death row have] killed white victims [while about half of murder victims are white]. So all victims are not equal: Some victims have status, some don’t.

As a woman, you wrote that your voice is “muted by the Church.” Can you talk about how, in practice, you are able to be critical of the church?

Sure. The church is the people. It is many things. When you love an institution or a body of people that you’re part of, when you see something morally wrong, you speak about it.

I’ve been in dialogue with the church about the death penalty. You can look at that and say, “Oh, she’s critical of the church.” Of course I’m critical. I’ve been in the execution chamber. What we stated in the catechism, “Oh, we can trust government,” is wrong. I’ve seen the hurt, the suffering, the cruelty. So when you see something wrong, you speak up.

There’s constant dialogue going on in the church, especially since Vatican II, so more and more women are speaking up. Why aren’t women a vital part of decision-making in the church? When it’s an all-male group of people sitting around the table making the policies, it’s not very healthy.

In the early church, Jesus’s disciples were men and women. Mary Magdalene, who was just declared having her own feast day, was instrumental. You had strong, outspoken women who were part of the original ministry, the Gospel of Jesus and the early church. St. Paul worked side by side with women who were preaching just like the men.

One of the dangers of an institution is that it starts getting solidified and rigid as it goes along.

How many executions have you witnessed since 1984?

I’ve witnessed six total executions: three electrocutions and three lethal injections. Lethal injection is just as bad. The Supreme Court is letting states experiment with drugs, so when that person is strapped down, they literally don’t know what’s going to be injected in their veins. Like Texas, where does it get its drugs? Supposedly, it’s supposed to have FDA approval, but here’s what happened.

See, people have to be deep enough under so that when potassium chloride goes through their veins and stops their heart, they don’t feel the pain. And when the European companies that made the main drug that was the main anesthetic heard that their drugs were being used to kill people in the US, they cut off the drug supply. That is what has led to all this experimentation. We have had botched executions. You know, we had Clayton Lockett in Oklahoma. There had been a number of people yelling out, “Acid’s in my veins!”

You have an Eighth Amendment that says you won’t practice cruelty, but you turn your heads because you’ve already demeaned these people as not human anyhow. You turn the switch. Because you say, “Look what they did to the victim.”

Hope Reese is a journalist in Louisville, Kentucky. Her writing has appeared in the Atlantic, the Boston Globe, the Chicago Tribune, Longreads, Vice, and other publications.

Political commentary can be both caustic and incisive. Molly Ivins showed America how.
The species the world lost this decade
Taylor Swift (and her fans) won a battle in her war against Scooter Braun and Big Machine Label Grou...
Trump, Putin, and America’s “geopolitical suicide”
8 winners and 6 losers from a Succession finale that blows the whole show up
The shamelessness of Bill Barr