The world’s most livable city is a smoker’s paradise 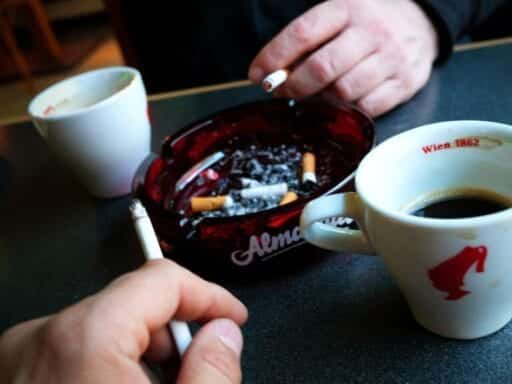 Share
Loading...
Patrons of a Vienna’s Cafe/Bar smoke cigarettes with their drinks in Vienna, Austria, on March 22, 2018. | Joe Klamar/AFP via Getty Images

Austria — including its capital Vienna — finally gets a smoking ban on Friday.

VIENNA — The Austrian government will finally ban smoking in bars and restaurants on Friday — a move that’s been met by protests, pub and nightclub closures, and lawsuits.

In one smoke-filled bar, Jacobs Kaffee, a bartender called the new law “expropriation” and said it’s absurd the government would forbid smoking indoors. “They take your taxes but say you can’t smoke.”

The ban is symbolic of the Austrian tendency of trying to “control everything to death,” argues Peter Dobcak, the tourism and leisure chair of the Vienna Chamber of Commerce. The law is certainly controversial, but really it’s surprising that it took this long to be implemented here.

Austria’s capital, Vienna, has repeatedly been voted the most livable city in the world, according to an annual index compiled by the Economist Intelligence Unit. A major part of the reason for the high quality of life is the government intervenes in just about every aspect of people’s existence.

Sixty percent of the city’s residents live in government-subsidized housing — something politicians routinely boast about. The public transit system is world-class (in two months here, I’ve never waited more than 10 minutes for a bus or tram). Viennese tap water, which trickles into the city from the Alps, is legendary. In order for Austrian moms to qualify for their sizable child benefit, they have to prove they submitted to a series of maternal health exams by having their doctors fill out a booklet — the Mutter-Kind Pass — and submitting it to the state. Perhaps, as a result, they have one of the lowest maternal death rates in the world.

And yet — and yet! — Austria is also known as the “ashtray of Europe,” with a population that “must be among Europe’s worst educated about tobacco.” People can smoke here, and just about everywhere. I’ve gulped down cigarette smoke on cafe patios, in restaurants, and in my brief waits at tram and bus stops. I’ve been served by a waiter with a cigarette hanging out of his mouth. I’ve seen pregnant women lighting up as well as kids who look like they haven’t reached puberty.

The smoking taboo, which spread throughout much of the West over the last 30 years, seems to have skipped over Austria. And the smoking statistics prove it.

Austria has more than double the number of daily smokers compared to the US, according to the Organization for Economic Cooperation and Development (24.3 percent compared to 10.5 percent of the population over age 15). It has one of the highest rates of teen smokers in Europe. Adult women are No. 1 among OECD countries when it comes to their penchant for cigarettes (22 percent smoke daily). Fourteen thousand people here die every year from causes related to smoking. And Austria hasn’t seen its smoking rate change since 1997, one of only two European Union member states with that distinction (the other is Slovakia). All together, these statistics put Austria in a league of smokers with Chile, China, and Turkey.

So how did Austria get it so wrong, when other Western countries legislated against cigarettes years ago? Austrians can thank a formerly state-owned tobacco industry, the far-right party, and something political scientists call “the Austrian solution.”

In 1964, the US came out with a landmark surgeon general report warning of the grave dangers of smoking. “In Austria, nothing similar happened until 1974,” says Michael Kunze, Medical University of Vienna public health professor emeritus and long-time tobacco researcher. “So we started 10 years later than the US.”

Part of this lag was due to an enormous conflict of interest at the heart of regulating tobacco here: The country’s tobacco industry was dominated by Austria Tabak, a state monopoly that controlled the production and distribution of cigarettes. “This tobacco monopoly was unbelievably powerful,” Kunze says, “politically and also as far as money was concerned.” Only in 1997, was Austrian Tabak privatized, and then in 2001, sold off to Britain’s Gallaher Group, another cigarette group, for $1.6 billion.

So for a long time, the government was not interested in curbing smoking rates — and in fact, had an incentive to keep people hooked on nicotine.

When lawmakers started to take tobacco controls more seriously, they came up with an absurdly half-baked fix in 2009: a quasi-smoking ban allowing restaurants larger than 50 square meters to simply cordon off an area where people could continue to smoke. (This, I can attest, results in establishments that are still pretty smokey.) Smaller outfits could opt out altogether, allowing people to keep smoking.

“[This was] a typical ‘Austrian solution’ as we would say here,” says Jakob-Moritz Eberl, a political science researcher at the University of Vienna. Coalition governments are common, he explained, and two parties need to come to a consensus on policies. “So all sides are asked to come to the table and discuss possible solutions.” The result, he added, “is often something where nobody will be really satisfied [with], but nobody should hate it completely.”

By 2015, Austria started to catch up to the 20th century: a coalition government, represented by the Social Democratic Party and the conservative Austrian People’s Party, decided to implement a total smoking ban on bars, restaurants, and cafes by spring 2018. The decision was opposed by Austria’s far-right Freedom Party, tobacco store owners, and the leisure and gastronomy industries, among others.

Then last year, a new coalition — between the former conservative chancellor of Austria, Sebastian Kurz, and the far-right Freedom Party — decided to stymie the ban. The far-right party, led at the time by an avid smoker named Heinz-Christian Strache, rallied around the idea that smoking, like speeding on the highway, was a personal freedom — one the country’s already considerable nanny state shouldn’t be allowed to intervene in.

Although polling suggested a majority of Austrians still favored a ban, the far-right party made a shrewd political calculation, Thomas Szekeres, the president of the Austrian Medical Association, told Vox. Szekeres’s organization helped launch a petition opposing the government’s scrapping of the smoking ban, which got nearly 900,000 signatures (a sizable number in a country of 8.8 million). And an analysis of those signatures, Szekeres says, revealed Freedom Party voters barely signed on, suggesting party supporters were compelled by the personal freedom argument.

During this time, Gabriele Fischer, a University of Vienna psychiatrist who studies addiction, says the media in Austria did a poor job of reporting on the smoking ban, giving the pro-smoking lobby too much attention and creating a false balance between two unequal ideas. “It was really a shame,” she says, particularly because the status quo has been an embarrassment. “I’m working with [people from] developing countries and when they visit, they can’t believe you can go into restaurants and smoke everywhere.”

Last May came a surprising twist in the story of Austria’s long road to a smoking ban: Strache, then the Freedom Party leader, was caught on tape appearing receptive to trading government contracts for positive news coverage with a woman posing as a Russian oligarch. The coalition government fell apart. The scandal, known as the Ibiza affair, had a surprising benefit for public health: an interim government passed the smoking ban.

On Friday, non-smokers in Austria finally will be able to breathe easy in bars, restaurants, and cafes — a move the World Health Organization’s program manager for tobacco control in Europe, Kristina Mauer-Stender, applauded. “[It’s] important to see all countries introducing a smoke-free legislation with no further delay,” she said in a statement to Vox. “[The] evidence is crystal clear that the only effective way to protect workers and the public from secondhand smoke is to enact 100 percent smoke-free laws that ban smoking in all indoor workplaces and public places.”

But the ban is just one small step toward cracking down on tobacco here. While there’s a 78 percent tax on cigarettes, they are still relatively cheap in Austria. A 20-pack of Marlboros costs 5.50 euros (US $6.14), an increase of only .60 euro since 2014. In nearby France, the same pack now costs 9.30 euros; and in the United Kingdom, 11.05 pounds (US $14.31) — both countries that have recently increased their cigarette prices and have lower smoking rates.

“We demonstrated back in the ’80s,” Kunze says, “that price policies are the most important strategy to control tobacco.”

“There’s no discussion [in Austria] about tobacco taxes,” says University of Vienna’s Jakob-Moritz Eberl. “There’s even more discussion about sugar taxes here.” He thinks this is mostly a political failure, though the strong coffee house tradition hasn’t helped. “In Austrian culture, we think about the kaffeehauskultur — it is just normal to have people smoking in there.” Meanwhile, alcohol consumption remains another major public health issue — one politicians appear reluctant to touch, he added. Austria is second to only Lithuania among OECD countries when it comes to daily alcohol consumption, thanks in part to low taxes and cheap booze.

For now, even the cigarette ban will continue to face challenges, Dobcak told Vox. “We have 500 shisha bars with several hundred employees in Austria — they will be wiped out,” he says. These businesses already have two lawsuits in the works, and Dobcak’s organization expects there will be more, as nightclubs and bars suffer financially because of liability issues, including noise complaints over smokers pouring out into the streets.

Not everyone shares Dobcak’s sentiments. At the Loos Bar, a snug, wood-paneled Vienna institution, as famous for its cocktails as its modernist architecture, a bartender said he couldn’t wait for the change and had no plans to protest. “A ban is a ban.” A maître d’ in nearby Fabios said the popular Italian restaurant-bar had gone smoke-free a year ago with little impact on its bottom line. It’s “normal progress in the world. People, the tourists, expect it.”

What we know about a shooting, stabbing, and fire in Honolulu, Hawaii
Why Starbucks, Disney, and Tom Brady are all shunning plastic straws
Vox poll: 73 percent of Republican voters are questioning Biden’s victory
Mary Bono resigns as USA Gymnastics president
The toilet paper shortage is more complicated than you think
Reevaluating the role of technology in our lives