The year reality collapsed into pixels 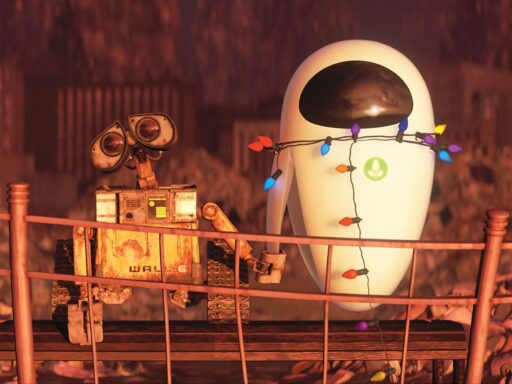 What I learned from spending 2020 working, learning, and entertaining on the same screen.

By the time the friendly robot Wall-E makes it to outer space in the Pixar movie that bears his name, the audience is ready to meet the humans. Years earlier, when Earth became overrun with the detritus of overconsumption, those humans absconded on spaceships owned by the giant corporation that sold them all that stuff, leaving little robots like Wall-E behind to clean up the planet. Now Wall-E has found a way onto the ship where the humans are. What will he find? Astronauts? Lord of the flies? An advanced, enlightened iteration of the species?

Nope. Human civilization, left to its own devices on a giant vessel owned by a corporation, has more or less devolved into full-time consumers. Earth’s descendants are effectively blobs — they sit in comfy chairs that cruise around the ship all day, wearing pajama-like outfits that can change colors at the touch of a button, with personalized screens to look at whenever they’re not sleeping. They’ve forgotten how to walk or interact with other people or do anything offscreen at all. In fact, the screens are so engrossing that although these humans are surrounded by other humans on other chairs with other screens, they never actually look at each other. Instead, the screens are portals to their entire reality. They’re where people order food, watch entertainment, talk to one another, and, most importantly, learn about what they should buy next.

By now you’ve caught on, because I can’t be the only person who felt like I was living in Wall-E this year. It was true for any of us who had the privilege of working from home. Pajamas: Check. Sitting in a comfy chair all day: Check. Working, teaching, socializing, entertaining, all through the same single screen? Check, check, check, check. And buying stuff because it was advertised to me? All too often … check.

All of these actions and habits were both right, since lives were at stake, and not wholly new behavior for any of us. I write about movies, so virtually all my work time and a vast amount of my downtime is spent staring at a screen. My work meetings here at Vox have happened on Zoom since long before the pandemic, since my colleagues are scattered around the world. I’m entertained by screens all the time. And a shocking number of my friendships were already sustained by interactions on Twitter, on Slack, on Instagram, in group texts.

But, like many teachers and professors, I also found myself teaching through a screen this year, which was new to me. I’d never had a birthday party on Zoom, or a happy hour, or Thanksgiving. I used to go to restaurants, but now I just tap on my screen and someone leaves banh mi outside my door. My yoga teacher is on my screen. I joined two different friends’ Passover seders on a screen. Friends told me about their Zoom dates with new people they’d met on apps. I participated in a virtual cocktail-mixing workshop. I attended a magic show, and the magician read my mind through the screen.

I’d also never seen a play on a screen, because that seemed like an oxymoron: A play on screen is just a movie, right? This is a pedantic quandary, and one that critics, who love pedantry above all else, enjoy arguing about: Is a filmed version of, say, Hamilton, actually a documentary of a performance, or is it an adaptation of a play? And since every time we rewatch the filmed version, we see the same thing, is the live unpredictability the distinguishing feature of theater?

That question became more pressing than usual in 2020 — not least because of the union implications that arise when plays migrate to live-but-virtual venues. The business side of theater is still sorting things out. But as a film critic who, in a pre-pandemic world, also saw a lot of live theater and sometimes writes about it, I spent time this year trying to categorize and verbalize what I was experiencing when I watched a play on Zoom.

Here I was, sitting in front of my TV, watching actors perform Heroes of the Fourth Turning or Three Kings in front of me, even though they were somewhere else, and they were doing it right now. In some cases, I watched plays on my screen that I had already seen onstage. Taking them in them via a broadcast that I could Airplay to my TV while wearing sweatpants was absolutely different from cramming myself into a knee-cramping seat somewhere in midtown. And yet the experience was not like watching a movie at all, even if I had watched a movie in exactly the same sweatpants, on exactly the same screen, using exactly the same Airplay method earlier in the day.

There were myriad differences, but one was simply that theater delivers to the audience an element of shock, surprise, and risk, in a way that film cannot. Theater is dangerous. Something can always go mildly wrong — an actor flubs a line — or much worse, which in 2020 might have meant Zoom going down. But a movie is controlled and edited; nothing, in a good film, gets on screen by accident.

All of these distinctions might feel academic and pedantic, but they took on a strange importance to me this year. In 2020, I learned that when all of life comes at me through the same screen — when reality collapses itself into the same sheet of pixels affixed to a wall or contained within a rectangle of metal and plastic — then I’m more eager to tease out the differences. I want to know how attending my friend’s Zoom Seder is not like attending a table read of an old TV show episode, how watching the Metropolitan Opera’s archive recording of Wagner’s Ring Cycle is not like watching the Lord of the Rings trilogy, how teaching a “room” full of undergraduates looking at pixelated me is not like moderating a panel with famous filmmakers for small squares full of strangers.

In a strange, unexpected way, this year made me appreciate the richness of experience we’ve normally enjoyed both offscreen and on and, along with it, the importance of context in those experiences. Reality seemed to collapse because the context for everything was the same: a brightly lit rectangle in my house. I didn’t have to dress up, or check the weather to make sure I was wearing appropriate shoes, or technically even put on pants. (I still wore pants.) The lighting in my house was roughly the same no matter the activity, in contrast to the fluorescent lights I might have sat beneath at work or the candles that might have been flickering on the bar at a restaurant. No matter how good Zoom gets, it’s hard to replicate the theatrics of pedagogy — the walking around, pointing, and gesturing that’s part of effective teaching in a classroom. I can’t completely darken my house, and I don’t own a surround-sound system, so watching Tenet or Ma Rainey’s Black Bottom or any other movie does not bring quite the same immersive catharsis.

I suspect this is one reason I was so susceptible to buying stuff this year: Ads for all manner of products came at me through the same rectangle, but they had the added benefit of being easily translated into tangibility. That sweater onscreen is as real as anything else I do all week, and I want it, and if I click a few times I can make it even more real. This pan, too, and those books, and that houseplant. Onscreen, all this stuff is just as “present” as anything else — the friends I drink martinis with over Zoom, or the actor delivering a performance. The only difference is that I can’t reach out and touch those friends any time soon, or breathe that actor’s air. But I can buy this thing and have it in my house within two to three business days, making something in this all-virtual year palpable and touchable.

A few nights ago, I sat down to watch another livestream. This time, the Broadway cast of Jagged Little Pill, which opened last December and ran until theaters shut down in March, was singing most of the numbers live from a stage somewhere in New York. I saw Jagged Little Pill in previews almost exactly a year ago, in a theater full of ecstatic Alanis fans, and no matter how messy the show was, it was exhilarating. There were standing ovations and whoops and hollers from the audience. Electricity was in the air at the Broadhurst last year.

Now, in a live reunion concert with limited staging of a few numbers, some of that electricity remained. Over the course of 2020, we’ve figured out some ways to facilitate interaction between audiences and live performers, chats and polls and callouts through our screens. The Jagged Little Pill reunion reminded me occasionally of the virtual Theater of War productions I watched earlier this year, in which ancient Greek plays and slices of Shakespeare were performed live by actors, then followed by extensive conversations with the audience from around the world facilitated over Zoom. There was a sense, however tenuous, that we were connecting with one another.

But that kind of connection has its limits. With a swipe or a tap or a button press, I can quit watching if I get uncomfortable, or bored. An internet connection might crap out. Reality being collapsed into a screen with a frame around it means I can turn reality on and off, manipulate it, lower the volume, up the contrast, watch something else in the background — basically, since I had the luxury of living 2020 mostly in virtual spaces, I could bend reality so it catered to me.

It’s going to be strange when that changes again, even though I can hardly wait. Experiencing reality in its physical, sensory context will be a little unnerving. I think about the next time I’ll be seated in a theater next to someone who clearly sprinted from the train to make the curtain. Or the next time someone kicks the back of my seat at the movies. Or the next time I’ll be annoyed by walking into a bar with a book and realizing there aren’t any free seats. When reality stops catering to my on-demand whims.

By the end of Wall-E, the humans have returned to Earth in their spaceship, and tumbled out, awkwardly, onto the ground. They have been so excited to return to the planet few of them remember, a planet that was once their home but that none of them have seen firsthand. They exit the ship and look around for a moment, disappointed and confused. But then, they plant the one seedling, a little plant that Wall-E spirited into space. They water it. They start growing. There’s a little bit of hope at the end.

It’s cold. It’s dirty. There aren’t brightly lit pixels to look at, no voices cheerily exhorting them to buy something to add some variety to their day. Earth is still a mess. They have a lot to clean up, and nobody is coming to save them. They only have each other. But at least, now, they’re together.

Wholesale coffee is cheaper than it’s been in years. That’s not good news.
Big Little Lies episode 6, “The Bad Mother,” tries to show why women don’t report abuse
Who’s going to win the Nevada caucuses, according to the polls
Ghosts, witches, zombies: which supernatural creature makes the most money at the box office?
This week will be coronavirus’s worst yet in the US, experts warn
Harry Potter and the Author Who Failed Us