There are primaries in 5 states today. Here’s what time the polls close. 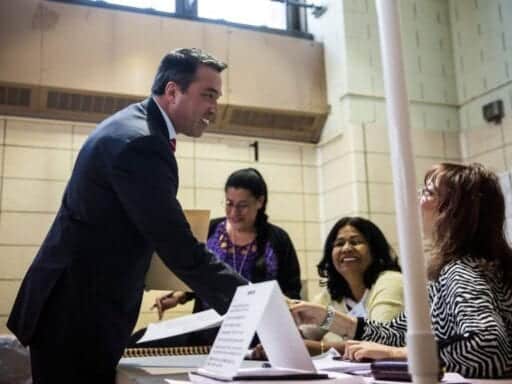 There are primary races in New York, Utah, Oklahoma, Maryland, and Colorado on Tuesday.

Voters head to the polls on Tuesday for primary elections in five states — New York, Utah, Oklahoma, Maryland, and Colorado — to cast their ballots in consequential contests that could have big implications in November.

Primaries in Oklahoma, Maryland, and Colorado will pave the way for some high-profile governor’s races in the fall. The fields in Oklahoma and Colorado are wide open, as both states have term limits for governors, and in Maryland, there’s a competitive Democratic field to face Republican Gov. Larry Hogan later this year.

Oklahoma voters are also voting on a ballot measure that would legalize in marijuana. And in New York, there are multiple races to watch, including one involving a Staten Island convicted felon.

In New York’s 11th Congressional District, incumbent Rep. Dan Donovan is fighting former representative and convicted felon Michael Grimm, who Donovan replaced in 2016, in the Republican primary. Grimm has attacked Donovan over his votes against the tax bill and Obamacare repeal, and both Anthony Scaramucci and Steve Bannon are backing him. Donovan vs. Grimm will be a closely watched race; whoever wins will face post-9/11 combat veteran Max Rose.

Former Massachusetts governor and 2012 Republican presidential nominee Mitt Romney is running for the US Senate in Utah. He’s widely expected to win Tuesday’s primary against state Rep. Mike Kennedy, but he’s still got to take part in it.

Romney could have bypassed the primary altogether had he won the Republican nomination at the GOP’s convention in Utah in April. He lost narrowly to Kennedy, who got 51 percent of the convention delegates’ votes to Romney’s 49. (Candidates need to surpass 60 percent to skip the primary.)

Romney is expected to win on Tuesday and face off against Democrat Jenny Wilson, who is on the Salt Lake City Council, in November.

Oklahoma is also voting on whether to legalize medical marijuana.

There are also several Democrats running in the primary for Maryland’s First Congressional District. Currently represented by Republican Rep. Andy Harris, Democrats are hoping to flip the state’s only red district in November.

Term-limited Democratic Gov. John Hickenlooper will end his run in Colorado this year, and as in Oklahoma, there are a lot of figures on the left and right vying to replace him. On the Republican side, Tuesday’s primary will see Colorado state treasurer Walker Stapleton, former state Rep. Victor Mitchell, former Mayor of Parker Greg Lopez, and business executive Doug Robinson competing. On the Democratic side, it’s Rep. Jared Polis, Lt. Gov. Donna Lynne, former state Sen. Michael Johnston and former state treasurer Cary Kennedy.

In House races, another contest to watch is the Democratic primary in Colorado’s Sixth Congressional District. Army veteran and lawyer Jason Crow faces former Obama administration official Levi Tillemann, and the winner will go up against Republican incumbent Rep. Mike Coffman in the fall. Tillemann is the guy who sprayed himself in the face with pepper spray to make a point about guns.

The Supreme Court decides not to make the Electoral College even worse
Beto O’Rourke drops out of the 2020 Democratic primary
The Trump administration is targeting homeless trans people in the middle of a pandemic
Trump’s tweet about Alexandria Ocasio-Cortez’s victory is just absurd
Australia’s hellish heat wave and wildfires, explained
Decades of tensions between Minneapolis police and Black communities have led to this moment