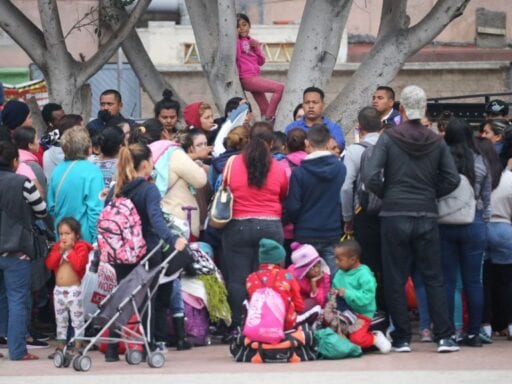 “As soon as they finish a case, they know there’s 10 more waiting for representation.”

The Trump administration’s family separation policy — and its sudden reversal — has thrown kids in the immigration system into chaos. It’s made it increasingly difficult for them to get access to some of the only people who could help them fight for asylum and be reunited with their parents: immigration attorneys.

Even before the White House issued its “zero tolerance” policy last month, there was an unmet need for more lawyers to help undocumented kids in the system. But the enormous influx of newly unaccompanied minors is adding to a drastic shortage of available attorneys.

“There’s always been a shortage of attorneys to provide legal representation for children, but it’s likely exacerbated [by] the number of children taken from their parents and put in government custody,” said Maria Woltjen, the executive director of the Young Center for Immigrant Children’s Rights at the University of Chicago.

Before the Trump administration’s policy went into effect, one attorney could represent a whole family. But now that previously accompanied children are being re-designated as unaccompanied, the parents and kids need separate attorneys.

That has had a ripple effect. Before family separation was in effect, about 60 percent of kids at the border were unrepresented by legal counsel, said Wendy Young, president of the nonprofit Kids in Need of Defense, which staffs and trains immigration lawyers to represent these kids. Now it’s closer to 70 percent.

“They’re the ones in the most need,” Young said. “The system is saturated right now.”

Why are lawyers so important for these kids?

Lawyers help children navigate a complex immigration system once they get to the United States and are taken into custody by immigration authorities. Lawyers are the ones that can help get families out of detention and claim asylum or another protected status so they can stay in the United States. Immigration lawyers are the ones trying to fight against parents and kids getting deported. Increasingly, they are also the ones trying to reunify families separated by the Trump administration.

“It is complicated, and this is why attorneys matter so much,” Young said. “These cases take time, they’re complex, and the system is clogged.”

Young estimated that a single immigration lawyer is juggling 50 to 200 cases, depending on their level of experience. Many of the lawyers are working pro bono, not charging undocumented clients for their services. Other attorneys are volunteering what little free time they have to help kids and parents.

“They’re doing this out of the goodness of their hearts on top of their day job,” said Young of pro bono attorneys.

“Our staff attorneys work endless hours,” she added. “As soon as they finish a case, they know there’s 10 more waiting for representation.”

“There are 2,300 children putting pressure on a system that couldn’t keep pace with the need,” said Young. “We are doing our very best to represent as many kids as well as we possibly can.”

Legal organizations are scrambling to train pro bono attorneys to get to the border and to detention facilities around the country. And many lawyers who work on these cases say the attention to kids is good but that it’s now even more difficult for parents to get representation as well.

“The children’s cases are being severed from the adults’ cases,” said Woltjen. “Now the attorneys that have been serving typically unaccompanied kids are now also having to provide representation for the children who have been separated. It’s made more work.”

The immigrant court system is already severely underfunded and has far fewer judges than can process cases in a timely manner. This has been a problem for years, especially after the number of unaccompanied minors coming from Central America spiked in 2014.

The Transactional Records Access Clearinghouse at Syracuse University keeps tabs on the country’s immigration courts — where immigrants go to determine whether they should get legal status, or be deported. As of July 2014, they found, nearly 400,000 immigrants are waiting for their cases to be resolved — a record high, and an increase of over 20 percent in a little under two years.

The average immigrant with a pending case, according to TRAC’s data, has been waiting for 567 days — a little over a year and a half. Immigration courts around the country have been facing a serious backlog for years: more money is poured into federal immigration enforcement, which means more immigrants are coming into the court system, but the courts themselves aren’t getting the same increases in funding to hire more judges and staff.

As the number of migrant children and families coming to the US from Central America continued to rise through this spring, it sparked a crisis that threatened to overwhelm the immigration court system — which could barely deal with the immigrants it already had.

It’s clear the Trump administration has created new pressure points on an immigration system already bursting at the seams.

America’s love for guns, in one chart
Human Rights Watch blasts President Donald Trump on withdrawal
Meet Alexandria Ocasio-Cortez, the progressive Latina shaking up politics
The woman who argued Roe v. Wade on Kennedy retiring: “We thought we had won this”
“A recipe for toxic stress”: an expert on why Trump’s family separation policy is so damaging to kid...
Trump’s top intelligence officer didn’t know that the president invited Putin to the White House