There is no fall TV season anymore 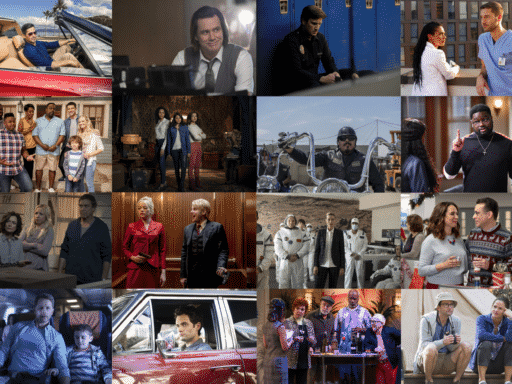 Technically. I mean, did you even notice?

There was a time when the start of a new TV season would bring with it endless pomp and circumstance. The Emmys would air the night before the season started, to reward the best of the past season. The networks would air preview specials in the weeks leading up to the new season, showing off the best moments from their new shows.

You would be all but unable to escape the endless onslaught of advertising for those new shows, and the TV Guide would be the thickest, chunkiest issue of the year. And that’s to say nothing of the on-network promos that gathered up all the biggest stars to sing and dance to some cheesy pop knockoff (or, in the case of the WB, brood beautifully to the tune of This Way’s “Crawl”).

But we’re living through an era when almost all of that is disappearing. As with summer movie season, “fall TV season” increasingly feels like an anachronism, a way to mark the passage of the entertainment year that has been drowned out by a glut of programming. How can it be fall TV season when it’s always fall TV season?

The slow, kudzu spread of new TV to every corner of the calendar

Okay, yes, technically, there are still a few months where it doesn’t feel like 500 new shows debut every week. After Thanksgiving, basically no shows launch, due to the end-of-year slump in programming (though Netflix, Hulu, and Amazon have all experimented with launching shows in this window), and August is still relatively quiet, though that, too, is changing.

But the age of “fall TV season” — roughly September and October — and “midseason” (which sort of loosely comprised the January through March window) is essentially done for. Yes, lots of shows still launch in those windows, but we’ve also got a new “prestige TV” season (March through May), and there are so many more summer shows launching in June and July, and January is more crowded than ever, and … and…

Fall TV is still important for broadcast network shows, and ABC, CBS, the CW, Fox, and NBC will be launching 20 new series before the end of October. That’s not nothing. But where all but a handful of cable networks and streaming service programs used to stay away from the fall glut, now there are even more of them adding to the pile-up. FX launched its Sons of Anarchy spinoff Mayans MC in early September, HBO has its new Jennifer Garner vehicle Camping in October, and all three major streaming services have multiple programs debuting in these two months.

And I haven’t even mentioned returning shows.

Now, the argument here might be, “So fall TV season hasn’t disappeared. It’s just gotten worse.” I suppose that’s technically true, but only because there’s so much more television (more than 500 scripted shows, almost certainly) that everything has gotten worse. When Netflix is dedicated to launching a new show, or a new season of a show, on every weekend but a couple of holiday weekends, it’s hard to single out “fall” as a particularly important part of the TV calendar.

This doesn’t mean we should completely abandon the other aspects of what fall TV season used to stand for — and, indeed, we here at Vox are going to be running weekly programming guides for you to make sense of the giant glut of new shows coming at you between now and Thanksgiving (when that glut mercifully calms down a bit).

But the idea of fall as sink-or-swim time for new TV shows is increasingly antiquated. So why do we still cling to it like an essential part of the calendar?

The whole reason we have a fall TV season in the first place largely stems from advertising. In particular, car manufacturers liked having new shows to place commercials on in the fall because it allowed them to advertise the new models as they began to hit car lots in the last three months of the year. (This is still true.)

But ad-supported TV is a slowly dying model. It’s not like it’s going to completely disappear in the next few years (or even the next decade), but the focus of the TV industry is less and less on the ways that advertisers can make or break the bottom line.

Indeed, if a network launches a new series in the fall, and it struggles to find an audience, there are many more arguments for sticking with that series than there used to be, especially if a network owns that show and can sell it overseas or to streaming services. (I’ve written a lot more about this slow, steady downward trend in cancellation.)

So, then, why take a show that your network believes in and leave it to struggle for attention in the fall, when it might be better served launching somewhere else on the calendar? This has led to the very strange phenomenon of networks holding shows they clearly believe are their prestige players for midseason, while burning off more rote programs in the fall.

There are exceptions, of course — NBC launched This Is Us in the fall and seems to be really into its (not that great) mystery drama Manifest and (perfectly adequate) medical drama New Amsterdam this year. But fall TV means less and less for networks in terms of quality, as well as in terms of their bottom lines.

And for streaming services and cable networks, the economic incentive is to just keep producing and producing shows. Volume is the way to keep making money if you’re Netflix, because every show you produce might become the favorite of just enough subscribers that they keep paying for subscriptions.

And if you launch all of those episodes at once, as Netflix does, well, you need dozens upon dozens of shows in production, and you need to scatter them all across the calendar. This is less true for services like Hulu, which release some shows weekly, but even those are ramping up production to better fill out the year.

What’s more, the sheer number of shows on the broadcast networks launching in the fall window (the one thing still notably different about this part of the calendar) is down from where it was just 10 years ago. In the 2000s, it wasn’t rare for the number of new shows on broadcast to flirt with 30; in the past few seasons, it’s been rare for that number to go over 20. (And, really, my 20 count above is a lie, since it includes the not-actually-new Murphy Brown and only sort of new Roseanne spinoff The Conners.)

Will fall TV continue to be important in the future? The answer is yes, but a qualified yes. In the sense that it marks a busy point in the TV calendar, sure, it’s worth paying attention to. But when the entire TV calendar is filled with new shows, when every week feels like the fall TV seasons of yore, the importance of fall premiere week every late September wanes. It’s not fall TV — it’s all TV.

The (mostly) true story of hobo graffiti
Cyclone Fani: what we know
Zoom tries to buy its way out of its security problems
West Elm won over millennials. But now it’s really pissing them off.
9 essential lessons from psychology to understand the Trump era
75 Catholic priests and scholars ask Francis to backtrack on death penalty