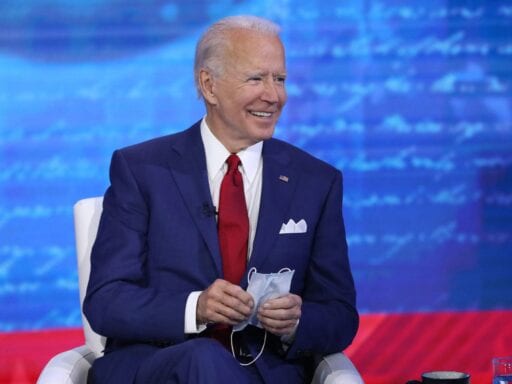 Biden’s support for transgender rights highlighted his empathy — and some fumbles with language.

Former Vice President Joe Biden’s response on transgender rights during a town hall on Thursday highlighted his empathy on these issues — as well as some of his struggles with the language around them.

Biden, in his answer to a mother who asked how he’d guarantee protections for her trans child, emphasized that he’d roll back President Trump’s executive actions including a measure that bars transgender people from openly serving in the military; he then went on to condemn the murders of transgender women of color.

“Eliminate those executive orders, number one,” he said. “There is no reason to suggest that there should be any right denied your daughter.”

Biden’s positions on trans issue were — as they long have been — a stark contrast to Trump’s approach, which has included outright attacks against the rights of transgender people, including rolling back an Obama-era memo directing schools to protect trans students from discrimination and reducing protections when it comes to health care discrimination. (Trump was not asked about transgender rights during his town hall on Thursday.)

We deserve a president who will fight for transgender rights, advocate for our community and affirm that #BlackTransLivesMatter. @JoeBiden is that leader. #BidenTownHall pic.twitter.com/9v1G4xh3kb

Biden’s response covered some of his policy proposals as well: He committed to changing the law to guarantee protections for transgender people, and to use his executive power to reverse actions taken by the Trump administration. Biden has said he’d sign the Equality Act, legislation that changes civil rights law so sexual orientation and gender identity are explicitly protected characteristics.

Biden, in his remarks, also specifically drew attention to the murders of transgender women of color, disparities that have rarely been addressed on the presidential debate stage. According to the Human Rights Campaign, 33 transgender or gender-nonconforming people have been killed this year, and this violence has disproportionately affected Black and Latinx transgender women.

“What’s happening, too many transgender women of color are being murdered,” Biden said.

The language Biden used in his response, however, was not always clear. In one instance, he appeared to make a point about the challenges transgender people face — noting that some people may wrongly see being trans as a decision when it isn’t one. He did so confusingly, however, without fully finishing his thought. “The idea that an 8-year-old child, or a 10-year-old child, decides, you know, ‘I decided I want to be transgender. That’s what I think I’d like to be, it would make my life a lot easier,’” he said. “There should be zero discrimination.”

Biden’s LGBTQ+ engagement director Reggie Greer clarified that “during last night’s exchange he was critiquing the wrong idea that being transgender is a choice.”

Other times, Biden fumbled. When speaking about the work of his late son Beau Biden, he described a person in his office as a “young man who became a woman” — but a trans person doesn’t “become” a person of a certain gender; that’s who they are. Beau “was the guy that got the first transgender law passed in the state of Delaware and because of a young man who became a woman, who worked for him in the attorney general’s office,” he said.

As noted by the Advocate, “Biden did not mention the woman’s name, but trans woman Sarah McBride, now a candidate for state senator in Delaware, worked closely with Beau Biden on [anti-discrimination protections.]” McBride posted a tweet in support of Biden following the town hall. Biden’s campaign didn’t directly address questions about Biden’s comment regarding Beau Biden’s former staffer.

I’m proud to call @JoeBiden a friend and ally.

When I came out, Beau joined us at the front lines of the fight to pass landmark protections for trans folks in Delaware. In this campaign, Joe Biden has carried forward that legacy. Their support has made so much possible.

And no, it was not a perfect answer. Biden stumbled over his words, as he sometimes does. The difference here is that so many of us have heard him speak movingly on this so many times in the past that we can have good faith with an imperfect answer. Grace. We know his heart.

A tension between Biden’s policy proposals and the language he’s used has been evident previously as well, such as when he was criticized for making off-color jokes and for pretending to kiss CNN anchor Anderson Cooper, who is gay, at a town hall in 2019. As LGBTQ advocate Charlotte Clymer has written, Biden has a strong record on LGBTQ rights: In 2012, he said “discrimination against trans people is ‘the civil rights issue of our time,’” and that same year, he became the first national leader to publicly support marriage equality.

“Vice President Biden is proud of his unmatched record advancing equality, inclusion, and acceptance for millions of transgender people in America and around the world,” said Greer. “As president, Joe Biden will build on his legacy and center the Biden-Harris administration around the lived experiences of the transgender community.”

Ultimately, Biden’s record — as well as the language he employs — matters, and if he becomes president, both what he says and does will set an important example.

The 9 most important unanswered questions about Covid-19
Controversial FBI agent Peter Strzok’s upcoming hearing, explained
Here are all the 2019 Oscar winners
Why Bernie Sanders lost and how progressives can still win
Okay, Google, how do I listen to Vox?
Peacock, NBC’s new streaming service, wants you to watch ads.