“There’s an Elon Musk premium in the stock”: Why Tesla can’t get rid of Musk 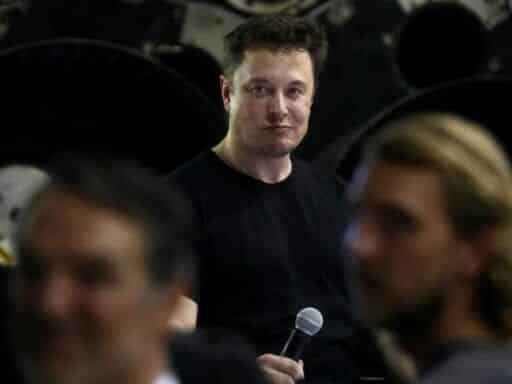 The DOJ and SEC have probes open. Musk’s tweets have been problematic. And yet, he’s likely to stay on.

Elon Musk, CEO and chairman of Tesla, has in recent months sparked federal probes with an off-the-cuff tweet about taking his company private. He’s been sued by a British cave diver for insisting the man is a pedophile. He appeared to smoke marijuana on a podcast with the media and spoke about his use of Ambien to sleep.

Were anyone else at the helm of a multi-billion-dollar publicly traded company acting like this, he or she would generally face some sort of consequences from the firm’s board of directors — up to being removed altogether. But because he’s Elon Musk, and this is Tesla, that’s not what’s happened.

The “cult of Elon Musk” and the belief among many of the entrepreneur’s fans that he is a genius who alone can lead Tesla has allowed him to keep a tight grip on the electric car company. Many investors are in Tesla because they believe in Musk, and if he were to exit, it’s unclear what might happen to its stock price.

And even if shareholders were to want Musk to leave, its board of directors might not have the ability — or will — to act. Tesla’s board is filled with many Musk allies, including his own brother, and it has stood by him up to this point. A shareholder vote to remove him as chairman failed earlier this year, and Tesla’s complex setup gives Musk outsized control of the company.

“The problem is he basically controls the company with his position. The board are basically appointed by him, and it’s very hard for a director to cross the person who puts you there,” said Charles Elson, director of the Weinberg Center for Corporate Governance at the University of Delaware. “That being said, they have a bigger responsibility, and the onus is no longer on him but on them.”

Tesla and Musk inspire a lot of feelings on both sides

Tesla, perhaps more than any other company, inspires strong reactions from those who love the company and those who are rooting against it. There are the Tesla fans who seem determined to stick by the company and Musk, whatever happens, and the Tesla critics, who believe it’s only a matter of time before the automaker fails. That latter group is also where you get the Tesla shorts — the short-sellers who are essentially betting against Tesla and that its share price will fall.

Musk often publicly battles with short-sellers, and the August privatization tweet appears to have been partly motivated by the executive’s desire to get back at them. (It didn’t work.)

At the same time, he seems well aware of the importance of his superfans. When he put out a blog post explaining his thoughts on taking Tesla private in August, he estimated that two-thirds of Tesla’s current investors believed in the company enough that they would roll over into a private Tesla instead of taking the $420 per share buyout, well above Tesla’s share price of about $350 at the time. (Tesla’s stock closed trading Friday at $299.10.)

As Bijan Stephen explained for the Verge, to some, “the act of buying a Tesla is an investment in the world’s future.” That sense of excitement, plus the outsized attention on and belief in Musk, could be what’s buoyed Tesla enough to keep Musk from coming under further scrutiny. And even when Tesla fans do question the South African-born billionaire’s actions, some of them instead blame Musk’s love interests for his problems.

Garrett Nelson, a senior equity analyst at research investment firm CFRA Research, told me it’s “impossible” to quantify the value of Musk’s persistence as CEO and chairman of Tesla in its stock price.

Even if shareholders did want Musk out, doing it might not be that easy

Beyond Musk’s behavior, Tesla has a lot of issues on its plate to deal with: the company’s chief accountant quit in early September after less than a month on the job; it is improving on but still cutting it close with Model 3 production goals; and it has $10 billion in debt and only $2.2 billion in cash as of the end of June. (Tesla says it expects that cash pile to grow going forward.)

That, compounded by Musk’s issues, has put increased scrutiny on Tesla’s board of directors to act.

There are currently nine members of Tesla’s board of directors, including Kimbal Musk, 21st Century Fox CEO James Murdoch, and early Tesla investor and Valor Management head Antonio Gracias, all three of whom a group of shareholders tried to boot from the board this year, arguing they were failing to keep Musk in check and citing Musk’s refusal to answer questions from analysts on a Tesla earnings call. Another shareholder also introduced a resolution calling for Tesla to split the jobs of chairman and CEO so that Musk would just keep the chief executive spot.

Both resolutions were largely backed by advisory firm Institutional Shareholder Services. (It did advise keeping Kimbal Musk on). Both failed.

“No other CEO, given what’s occurred, probably would have survived this,” Elson, the corporate governance expert said. “The fact that he has suggests a board that is very loyal to him.”

The New York Times reported in September that Musk’s take-Tesla-private tweet angered some board members, and some board members had expressed concern about his workload and use of Ambien. But thus far, any of the board’s concerns have largely remained whispers.

A spokesman for Tesla declined to answer questions about the board’s confidence in Musk and why it hadn’t reacted to the founder’s attention-grabbing antics over the last few months.

But it’s not just the Tesla board’s loyalty that’s kept Musk safe — it’s also the way the company is structured. Musk owns about 22 percent of Tesla’s shares, and as TheStreet’s Ron Orol recently explained, that, coupled with Tesla’s super-majority voting rules gives him a lot of control over Tesla. The automaker’s voting requirements require two-thirds of shares approve major changes, including merger and acquisition deals and adjustments to its board.

“The main reason why [Musk] seems to be treated differently is because he’s such a large shareholder,” Nelson, from CFRA, told me.

Gene Munster, Tesla bull and managing partner at venture capital firm Loup Ventures, supports Musk staying on at Tesla, telling me he believes the South African-born entrepreneur “brings something unique to the table that no one else can bring,” making him “critical to the success of the company.” He compared him to Jeff Bezos at Amazon and Mark Zuckerberg at Facebook.

This is sort of just how Tesla and Musk are

Musk is one of the most talked-about figures in corporate America, and the buzz and excitement around Tesla has turned it into one of the largest automakers in the United States. When Musk appeared to smoke marijuana on comedian Joe Rogan’s podcast at the start of the month, Google searches of him surpassed both Donald Trump and Kim Kardashian.

He’s not the first charismatic founder and executive to ignite problems at the company he started. Steve Jobs was famously booted from Apple in 1985, only to come back later. Facebook has brought on Sheryl Sandberg at Facebook, in part, to provide Zuckerberg with a grounding force and second-in-command.

There has been talk of Tesla bringing on a Sandberg-like figure to support Musk, which Nelson said would be a good idea. “This is a company that still doesn’t have a chief operating officer, and that’s where they’re having all of their issues,” he said. “Clearly the demand is here, it’s just a matter of executing.”

The clock is ticking. Tesla’s stock price has declined by about 20 percent since August 7, the day Musk tweeted he was considering taking Tesla private and sending Tesla shares up. Its issues with debt, cash, and profitability persist (though the company says it expects its cash problems to improve soon), and now, it’s got both Department of Justice and Securities and Exchange Commission probes to deal with.

“[Musk is] clearly a genius. I would compare him to the Thomas Edison of our time,” Nelson said. “That said, he’s very distracted at a point where he really needs to be completely focused on operational execution and delivering on the Model 3 targets. Instead, he’s appearing on podcasts, he’s tweeting, he’s spending a lot of time on SpaceX when arguably they’re probably at the company’s most critical juncture in terms of operational execution right now.”

Munster was slightly more optimistic, though he acknowledged the scenario isn’t likely to change.

“The company’s always operated in some form of organized chaos,” he said. “That’s not an optimal structure, but they’ve been successful in that context.”

What a second Trump term could mean for LGBTQ people
Why Melania’s response to Trump’s alleged affairs was so weird
In El Camino, a desperate Jesse Pinkman tries to break free of Breaking Bad
Vox Sentences: The latest twist in the Kavanaugh saga
America fell in love with Steve Kornacki this week
How to watch all 9 of the 2020 Oscars Best Picture nominees