There’s no case for the filibuster in a closed Senate 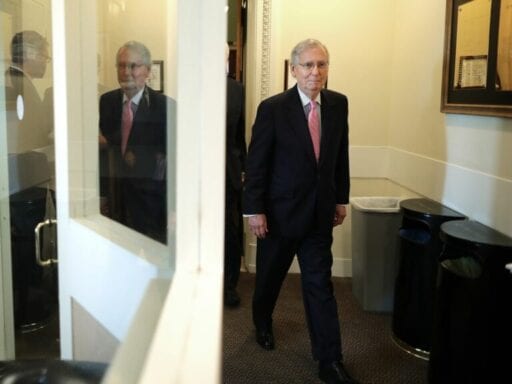 It’s not just an obstacle to progressive policy. Under McConnell’s rules, the filibuster weakens the institution — and democracy.

As the possibility comes into view that Democrats might win the presidency and perhaps also the Senate by a slim margin in 2020, progressive presidential candidates are already divided on the role of the Senate filibuster, which will likely present a formidable obstacle to ambitious policy ideas on health care, climate change, and child care.

Governors and mayors in the race, such as Jay Inslee of Washington and Pete Buttigieg of South Bend, Indiana, have no doubt that the filibuster is, as Inslee put it, “an artifact of a bygone era that is not in the U.S. Constitution and somehow it got grafted on in this culture of the Senate.”

But most of the many presidential candidates with roots in the “culture of the Senate,” despite different approaches to policy and conflict, have expressed misgivings about eliminating the filibuster. Cory Booker warned that without 60 Democratic votes in the Senate, Medicare-for-all was unlikely to pass, and even Bernie Sanders on February 19 said he was “not crazy” about ending the procedure, although it would stand in the way of his own ambitious policy vision. Among announced candidates from the Senate, only Elizabeth Warren has said that ending the filibuster is an option that should be “on the table.”

There are two strong cases for preserving the filibuster in the Senate. The better-known one, and the one that Booker and Sanders express, is that the filibuster can protect the minority party (or a minority faction that might not correspond to a party) and prevent a party that holds a majority in both houses along with the presidency from using a fleeting advantage to push through an agenda with long-term consequences. Sometimes reference is made to the apocryphal George Washington quote about the Senate as the saucer that cools the hot coffee of the more representative House, though even if Washington ever said that, it was more than a century before the filibuster emerged.

Democrats as well as Republicans can identify times when they have used the filibuster to stop legislation, as well as cases when it held back their party’s priorities. Among current senators, 68 have experienced life in both the majority and the minority at least once, so they’ve looked at the filibuster from both sides.

The second argument for the filibuster is less about partisan advantage or results. It rests on the ideal of the Senate’s character as an open institution. Individual senators can delay or block action, and free, as they are not in the more tightly controlled House of Representatives, to put new ideas on the agenda and force their consideration.

The filibuster is not inherently a supermajority requirement; it’s linked to the Senate’s principle of unlimited debate and amendment. Ending a filibuster, when 60 senators vote to invoke cloture, sets a time limit on further debate and strictly limits the amendments that can be proposed. Until cloture, in theory, senators are free to make their speeches and to offer amendments of all kinds. This makes the Senate, at its best, a vibrant, unpredictable institution, and a platform for entrepreneurs of ideas such as Warren.

One problem with the first argument for the filibuster is that it doesn’t apply to all Senate activity. The actions that can be restrained by filibuster have become limited and arbitrary. After rules changes initiated by both Harry Reid and Mitch McConnell, no presidential appointments require 60 votes for cloture. Anything that can be structured as a budget bill and moved through the one-party process of budget reconciliation is protected from filibuster.

The Congressional Review Act (CRA), a special procedure to reverse regulatory rules, creates another filibuster-proof vehicle, used 16 times to change policy during the Trump administration, though only once in two decades before Trump.

While procedures such as reconciliation can be used for partisan purposes only when a party controls both houses, the subset of legislative action that is actually subject to the filibuster is now quite limited by these exceptions. And policy is often distorted to jam it through one of these exceptions, particularly the budget reconciliation process. (It’s in order to comply with the Byrd Rule, which limits the use of reconciliation that some but not all of the 2017 tax cuts are temporary.)

Those several exceptions are likely to be less helpful to Democrats than they have been to Republicans. A party can use reconciliation to cut taxes or the CRA to wipe out regulations, but constructing new programs such as universal health care, child care, or climate change plans will remain subject to the filibuster. Because of the exceptions, the filibuster no longer has a balanced or equivalent effect between the two parties, if it ever did.

The second argument for the filibuster — that it’s an intrinsic part of the Senate’s character as an open, free-flowing institution — is the one for which I’ve always had the most sympathy. There aren’t a lot of democratic institutions anywhere in the world that give individual members or small groups the opportunity to raise new ideas, challenge an old consensus, or form durable cross-party coalitions.

The problem is that ideal doesn’t describe the Senate of 2019 at all. Instead of proposing and voting on amendments, senators have been reduced to begging Majority Leader Mitch McConnell to allow votes on, most recently, legislation to reverse President Trump’s declaration of an emergency, or, earlier, legislation to protect special counsel Robert Mueller.

Having worked in the Senate in the 1990s, I’m still taken aback whenever I hear senators asking McConnell to “allow” a vote. Allow? From what I remember, a senator gets a vote by sending an amendment to the desk and asking for its consideration. Often, the senator might accept a unanimous consent agreement to have the amendment considered later or under a time limit or accepted without a vote, or negotiate a promise that the proposal will be considered as separate legislation at another time. But the individual senator and her allies have some leverage.

In the current Senate, they don’t. McConnell controls the floor ruthlessly, drawing on a cluttered toolbox of arcane techniques. James Wallner, a longtime Republican Hill staffer now at the R Street Institute, has described some of those tools in an article in the Washington Examiner. At the core is the tactic known as “filling the amendment tree.” To oversimplify, there are only four slots for amendments to a bill at any given time — two first-degree amendments and two second-degree or “perfecting” amendments. By immediately filling all four slots with amendments (it doesn’t matter what they say) and leaving them unresolved, McConnell leaves no room for any other senator to offer an amendment.

Other techniques include bringing up a bill and immediately moving to suspend consideration of the bill, or moving to consider another bill. No other business can be conducted while those motions are pending.

As Wallner often points out, McConnell can exercise this level of control only because other senators don’t challenge him, even allowing “unanimous consent” requests to go through without objection. The “institutionalists” who protect procedures such as the filibuster have consented meekly while McConnell (and, to be fair, Reid to a lesser extent before him) has shut down the Senate. For Republicans, it has been part of their larger acquiescence in the cause of getting Trump appointees and Trump legislation through or, before 2017, blocking Obama’s appointments and legislation, while Democratic leader Chuck Schumer shares an interest in keeping the Senate under control.

But whoever is responsible, this is the Senate now and in the future: an unrepresentative, tightly controlled legislative body. In an open, free-flowing Senate, perhaps there’s a place for the filibuster, giving a minority of senators a way to bring in new ideas as well as to slow things down. But in the closed Senate, the filibuster becomes a simple supermajority requirement, one that’s applied arbitrarily and empowers a relatively small minority — one that in theory might represent as little as 17 percent of the nation’s population — to block the preferences of the majority, for years and years.

In an open Senate, the power to block action might be a worthwhile trade-off for the ability to initiate action. But on its own, it can only be an impediment to democratic decision-making.

Joe Biden has now essentially won the Democratic nomination
The FDA authorized the use of an experimental antibody treatment for Covid-19
Vox Sentences: Macron’s mea culpa
Trump said the opioid epidemic would go away. It didn’t.
Wisconsin’s primaries are setup for the real battle in November
“Give me a fucking break”: What Melania Trump said about the blowback against family separations