There’s no good reason for Cruella to exist. If you can get past that, it’s pretty fun. 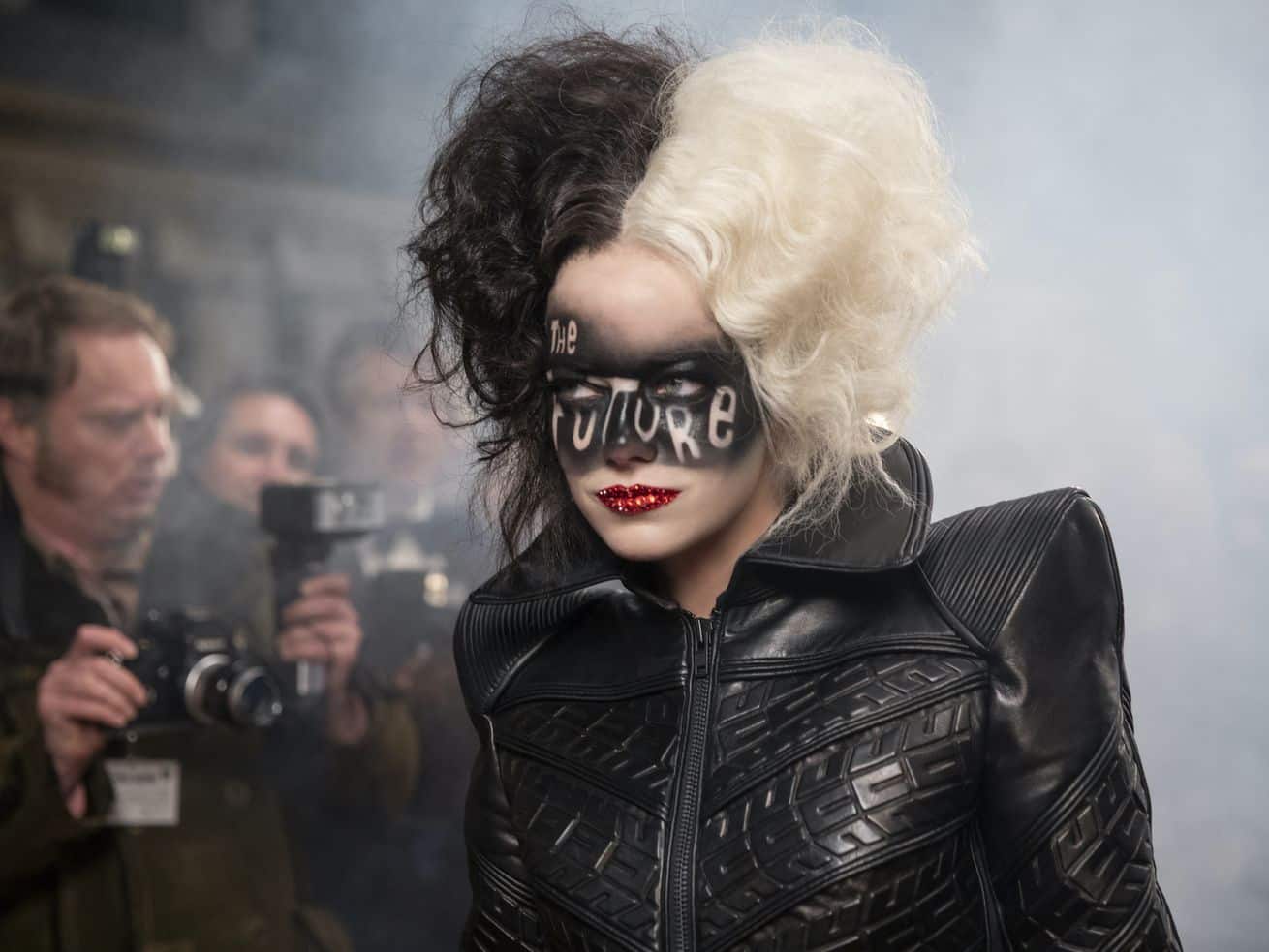 It’s somehow so much better than you’d expect from a Cruella de Vil origin story.

Disney’s Cruella is a completely unnecessary movie. I know it is. You know it is.

It’s the latest in a long line of films and TV shows designed to tell us about the secret origins of beloved figures from earlier stories, in this case Cruella de Vil, the memorably fur coat-obsessed villain of Disney’s 1961 animated film One Hundred and One Dalmatians. Cruella’s origins lie in Dodie Smith’s 1956 novel The Hundred and One Dalmatians, and she was memorably played by Glenn Close in the 1996 remake of the animated film.

Why do we need to know more about the origins of Cruella, this time played by Emma Stone? Isn’t it enough to know that she wants to make a fur coat out of Dalmatians for some unspecified reason? Can’t the fact that she is a former classmate of Anita (the woman who owns Perdita, one of the two Dalmatians that kicks off the plot of the original story) be enough to serve as an inciting incident? What purpose is served by filling in the backstory about who Cruella is, what motivates her, and where she comes from? She hates puppies! That’s plenty! Why spend a gobsmacking 137 minutes on this? A Cruella de Vil movie should be 105 minutes, tops, and even that’s pushing it.

I’ll stop belaboring the point; Cruella is not a movie the world needs. It would be really great if Hollywood would quit reheating its leftovers and pretending they’re new, and maybe the only way to teach the entertainment industry that lesson is to avoid these poor excuses for corporate brand extensions. We can agree upon that. We don’t have to say anything more about it! Except we do.

Because plot twist: I mostly had a blast while watching Cruella, even if I immediately started picking it apart the second I walked out of the theater. It’s an unnecessary movie with several easily identifiable flaws. Still, I kinda hope it gets a sequel.

Cruella has blessedly small stakes, which makes it easier to get into its vibe

Since the release of Tim Burton’s live-action Alice in Wonderland in 2010, Disney and its many other media conglomerate pals have realized the power of rebooting a familiar tale with an aesthetic seemingly designed to get teens to spend money on merchandise at Hot Topic. The marketing materials might sell these movies as “dark” or “gritty,” but the actual effect is something closer to family-friendly steampunk. It’s work that looks like it’s intended for mature audiences but is safe enough for even the strictest of parents.

I have detested most of these movies. The 2010 Alice is one of the worst films I’ve ever seen, the 2017 Beauty and the Beast is a needless cash grab, and the 2019 The Lion King is … another one of the worst films I’ve ever seen. I didn’t mind 2016’s The Jungle Book, and 2014’s Maleficent at least tried something by telling a metaphorical story about PTSD stemming from rape. But saying “I didn’t mind it!” about my favorite of these movies should tell you a lot.

All of these movies were humongous hits. For a while, Alice was one of the top five movies ever made at the worldwide box office. That’s how much familiarity breeds the opposite of contempt for modern audiences. Clearly, my crankiness puts me in the minority. Yet even while acknowledging that crankiness, I’ll gladly slot in Cruella as my new favorite. It’s a lot of fun, even when it’s kind of a mess.

That I enjoyed Cruella as much as I did may be linked to the fact that it occupies uneasy ground within the “Disney live-action remake of an animated film” subgenre. Technically, it’s a prequel to One Hundred and One Dalmatians, and if you know that story going in, some of its Easter eggs will appeal. If you’ve been dying to know how Cruella met her henchmen Horace and Jasper, for instance, well, this movie will tell you.

Those prequel trappings are the least interesting thing about Cruella, which is far less interested in where its characters are going than where they are in the moment the story is being told. The movie’s dramatic stakes are refreshingly tiny. Lives are occasionally endangered, but for the most part, it is a cheeky heist movie about Cruella — or, rather, Estella, as she’s known for most of the film — stealing back a family heirloom and destroying those who dare cross her in the process. Not having to worry about anybody saving the world or even averting certain death makes it easier to just sit back and enjoy the movie’s vibe.

I was surprised that Cruella turned out to be more of an origin story than I expected, since, again, I don’t know that Cruella de Vil needs an origin story beyond her last name. It’s the kind of movie that takes a long time to explain why “Estella” might adopt the name “Cruella,” which would normally drive me up the wall. Ultimately, the reason the whole thing works is that the story’s pleasures are so divorced from its prequel elements. Rename the title character “Charlotte” or something and you’d have a perfectly enjoyable tale about a woman who loses everything as a girl, runs away to the big city, and then spends decades plotting her revenge. It’s Inglourious Basterds — but, you know, for kids!

Cruella isn’t quite a visual feast, but it comes close enough, especially on a big screen

Cruella has one foot firmly in the Gothic kiddy fun of the Addams Family movies or the works of the young Tim Burton and another foot in the brightly colored goofball tone of the Paddington movies. Though it’s not as good as any of the films I’ve just named, it mostly finds a way to blend their influences together — a credit to its director, Craig Gillespie, who is low-key one of my favorite unsung filmmakers right now.

A lot of critics dislike Gillespie, whose movies include 2007’s Lars and the Real Girl, 2014’s Million Dollar Arm, and 2017’s I Tonya. He makes some real dreck, and even his best movies (Lars remains my favorite of his films) are plagued with over-obvious artistic choices. Cruella is positively rife with needle drops that basically tell you what’s happening on screen, a terrible way to use pop music in a movie, and it has, like, 16 different devices (voiceover! expository monologues to a dead loved one! constant exposition in dialogue!) to make sure you know what’s going on.

But what I love about Gillespie is the way his films always create what seems to be a tangible world — or would, if you could just get through the movie screen. His craftsmanship isn’t on as high a level as someone like Wes Anderson, but his movies always feel a bit like commercials for the tourism board of Wes Anderson World — slightly too glossy, like they’re trying to cover up some real seediness.

Extra artificiality hurts stories that require a more realist approach. Though I, Tonya was celebrated when it came out, I don’t think Gillespie’s approach was quite right for that film. Extra artificiality can be a real boon, however, when it’s wedded to material that’s already a little bit ridiculous. Enter the origin story of one Cruella de Vil.

At its core, Cruella is a story about a messed-up young woman learning to embrace her flaws, but never in a way that feels legitimately dangerous or threatening. She’s more Avril Lavigne than Joan Jett, and sometimes, you just want to listen to “Complicated.” Hence, Gillespie is a perfect match for this movie.

Like most of Gillespie’s other films, Cruella is a lot of fun to look at. The production design by Fiona Crombie has a tactility that too many CGI spectaculars lack today, and Jenny Beavan’s costumes are the right blend of garish and sleek, fitting right into the story’s setting of 1969/70-ish London. (Timeline-wise, the film must take place in 1976 or so, but it also seems like it’s trying to mesh with the 1961 release date of the animated film, resulting in a mid-20th century mishmash.)

The big flaw in terms of visuals is the too-bright cinematography, where the lights are turned up so you can see each and every corner of each frame, as though Cruella lives in a Restoration Hardware window display. But that same flaw seems increasingly common across all Disney films, and where Gillespie and his team were able to make this movie at least a little bit visually interesting, they did. It’s not precisely a feast for the eyes, but it may be close enough that if you really miss seeing movies in theaters, it will do the trick.

A lot of talented people were thrown at Cruella to ensure the movie sorta works, including screenwriters Dana Fox (creator of TV’s Ben and Kate and Home Before Dark) and Tony McNamara (of The Favourite and TV’s The Great) and composer Nicholas Brittell (of Succession and every Barry Jenkins project fame). Heck, Cruella’s “story” credits — which usually indicate screenwriters who worked on a project before it reached its final draft — include Crazy Ex-Girlfriend showrunner and Devil Wears Prada screenwriter Aline Brosh McKenna. With so much creative talent involved, shouldn’t Cruella be better than “pretty good”?

Maybe. But I had so much fun watching it all the same, and I think my ability to overlook its flaws is thanks to its visual world and to Stone’s portrayal of Cruella herself. Emma Stone is an actor who can feel a little at sea when she’s stranded in a movie whose tone cuts against her acidic smirk, or when she doesn’t mind-meld with her directors. Her best performances tend to lean into her snarky self (Easy A, The Favourite) or actively push against it with all they have (La La Land).

Cruella sneakily does both — tempting Estella down the path of darkness, so that when she finally lets loose and becomes the more bombastic Cruella, you’re ready for Stone to cut loose a little. Cruella is a very silly film, and I’m not sure it would work with any other actress at its center. But it has Emma Stone, and she’s having the time of her life. Sometimes, that’s all you need.

Cruella debuts Friday, May 28. It will play in movie theaters, and it will also be available as a “premium” rental on Disney+ for $29.99. I want to reiterate: Even if I enjoyed it, it’s still way too long.

How HIPAA lets Trump pick which medical details are released to the public
An FBI investigation shows Ohio’s abysmal energy law was fueled by corruption
Trump could help solve the mask problem. Instead he’s making baseless attacks on New York nurses.
The White House has released a redacted version of the whistleblower’s complaint
The Navy grants the first exception to Trump’s transgender military ban
Twitter is banning political ads. Nonprofits like mine could suffer.