These dogs, birds, and squirrels are stuffing their faces with Brood X cicadas 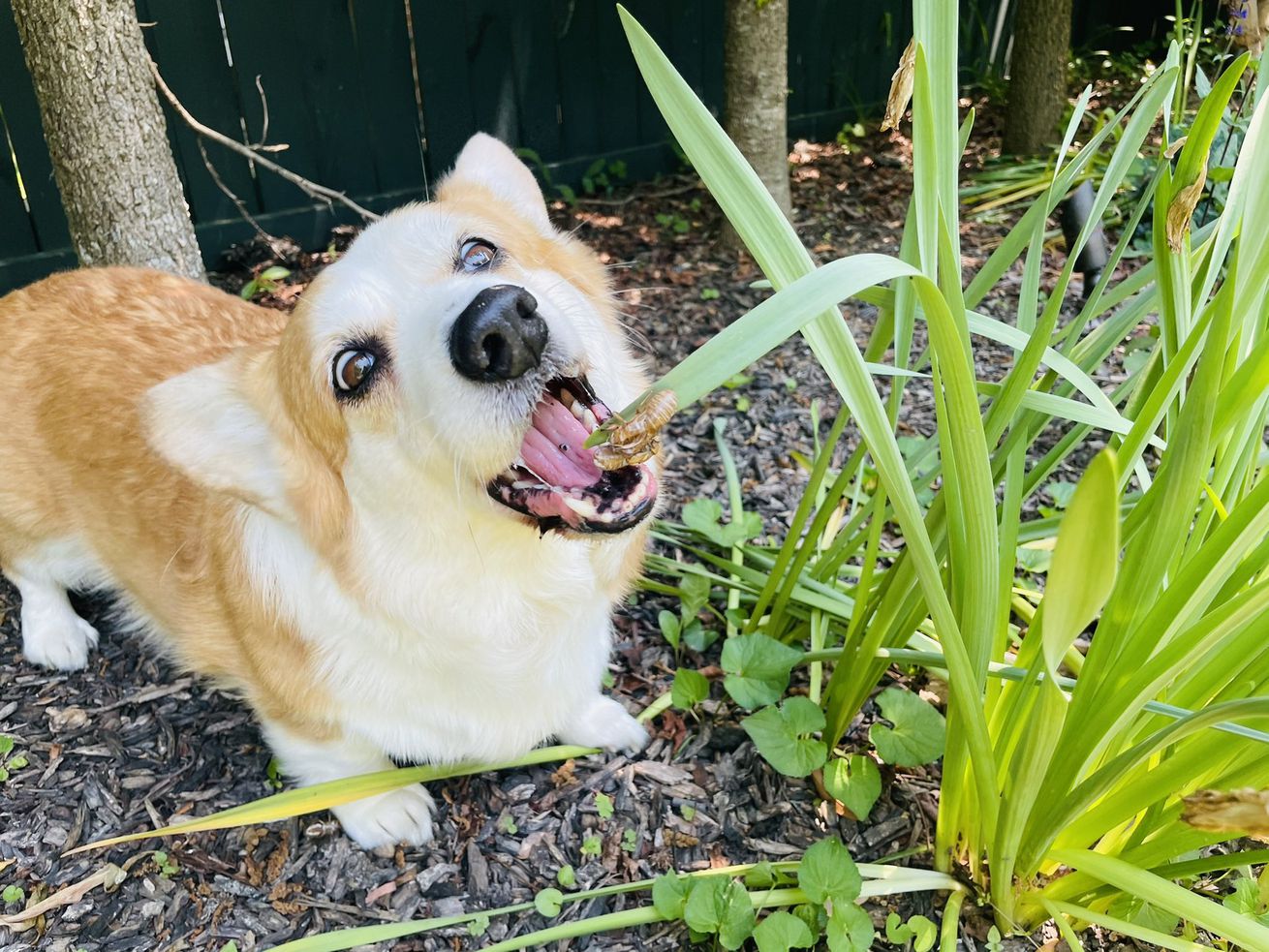 They’re filling up while the filling’s good.

This story is part of Down to Earth, a Vox reporting initiative on the science, politics, and economics of the biodiversity crisis.

For some of us, the thought of biting into a cicada, six legs and all, is revolting — be it deep-fried or dipped in chocolate. But many other animals, from dogs to fish to raccoons, pounce at the chance to snack on these winged insects, and they are eagerly digging in as billions of Brood X cicadas erupt across parts of the eastern US and Midwest. No toppings necessary.

For pet pooches, the crunchy critters may offer a reprieve from their dull, daily dog food. Some canines are so cicada-crazy, in fact, that their owners have to muzzle them while taking them outside, for fear they might swallow too many of them and suffer from gastrointestinal problems.

Wild animals are having a field day, too. Squirrels snag cicadas while scurrying down trees, fish gobble them up as they fall into lakes and streams, and birds snatch them from the forest floor.

Remarkably, while the cicadas will only flit aboveground for a few short weeks — to mate and reproduce — they may shape some wildlife populations for years to come. “Following emergences, you do tend to get an increase in a lot of the apparent avian predator populations,” Walt Koenig, an ornithologist at Cornell University and a research zoologist emeritus at UC Berkeley, told Vox in April.

So without further ado, here’s a smattering of dogs — and birds, and squirrels — filling up while the filling’s good.

Canines are going bonkers over cicadas

The periodical cicadas crawling out of the soil are part of Brood X, a group that erupts once every 17 years when the soil reaches about 64 degrees. Scientists suspect they come up all at once as a survival strategy — predators could never consume all of them, so plenty of the insects will live on to mate and lay eggs to produce the next generation of Brood X.

Whatever the strategy, there are plenty to go around — and dogs appear to be loving the bounty. “Watching her eat them is like watching a human eat potato chips, just one after another,” Kenny Torrella, a deputy editor at Vox, said of his dog, Evvie. She’s shown below grabbing some cicada exoskeletons off of a fence in Silver Spring, Maryland.

“A cicada laid dormant here in the DC area for 17 years just to get eaten by my fat corgi named Winnie immediately once it emerged,” another dog owner joked on Twitter.

There is such a thing as too many, according to Dr. Jerry Klein, chief veterinary officer at the American Kennel Club. “In most cases, your dog will be fine after eating a few cicadas,” he wrote in a blog post. “However, dogs that gorge on the large, crunchy insects will find the exoskeleton difficult to digest and can suffer serious consequences,” from an upset stomach to vomiting.

Those concerns have led some owners to use a muzzle on their dogs to prevent them from nabbing too many cicadas — like this guy, Jake. “Jake won’t stop dive-bombing for cicadas,” his owner Vincent Intondi wrote on Twitter. “So now the sweetest, friendliest dog on the block looks like Hannibal Lecter.”

Other dogs experience a different kind of cicada woe.

One morning earlier this week, Ashley Durkin was out walking her dog Carmine in Takoma Park, Maryland, when the 7-year-old chihuahua-dachshund mix gobbled up seven cicadas. Carmine has an overbite, so he’s prone to dry mouth, Durkin told Vox. The cicadas only made it worse. “It was very dry after his ‘buffet’ trip, so his lips got stuck,” she said.

Other dogs are not sure what to think. Take this pup, below, whose playful, wide-leg stance is instantly recognizable to any dog owner. (My dog, a 10-month-old Shepherd mix, will spend five minutes chasing a fly, so I can only imagine how he’d react to a cicada.)

Then there’s Abbie, food editor Laura Hayes’s corgi in Washington, DC, who seems to especially enjoy the snack when it’s low to the ground.

Brood X may give birds a long-term boost

In the animal kingdom, a full stomach is a big deal. With more food, you often see more babies. So it’s no surprise that following a major cicada emergence like this year, you tend to get an increase in the populations of birds, Koenig said.

An analysis that Koenig coauthored — based on 37 years of population data for 24 predatory birds — found that cicada eruptions “significantly influenced” almost two-thirds of them. Eight species, such as the red-headed woodpecker and the common grackle, saw a population bump of 10 percent, on average, following the brood emergences.

Remarkably, many of these knock-on effects lasted for years, Koenig said. The number of blue jays, for example, was significantly higher even three years after the cicada eruptions.

Oh, and let’s not forget about the domestic birds, like Lucy, a golden buff chicken who resides in Takoma Park, Maryland.

Pretty much every kind of animal gets in on the cicada bonanza, from squirrels to snakes, whether or not insects are typically a staple in their diet. “It’s one of my favorite parts about working on periodical cicadas,” Louie Yang, an entomologist at the University of California Davis who has studied cicada ecology for years, told Vox in April. “You see a lot of cool wildlife come out of the woods.”

You can even bait fish with them. “Any type of predatory fish will eat them,” Eric Hussar, a commissioner with the Pennsylvania Fish and Boat Commission, told the Baltimore Sun last month. “It’s like a steak to these fish. Like a big filet mignon. It’s a pretty incredible sight to see.”

Some experts have also suggested that rat populations could balloon following the Brood X emergence. Other insects will get a meal, too.

And more humans seem to be warming up to the idea of eating cicadas. Known to be bland with a subtle taste of asparagus, cicadas have long been consumed across cultures. Plus, insects, in general, are considered an environmentally friendly source of protein compared to traditional meat (they require far less feed, water, and land).

So perhaps consider joining your pup, and give it a go! I’ve gotta say, these spicy popcorn cicadas don’t look half bad.

In Netflix’s The Trial of the Chicago 7, Aaron Sorkin tackles an all-too-relevant court case
Sunday’s virtual Sondheim concert was the most cathartic experience of quarantine so far
The ironic invisibility of the loudest man in America
The totally wild, true tale of a meme about aliens that almost inspired a real raid on Area 51
The Biden administration’s early plans for racial equity, explained
Watch an AI learn to play hide-and-seek