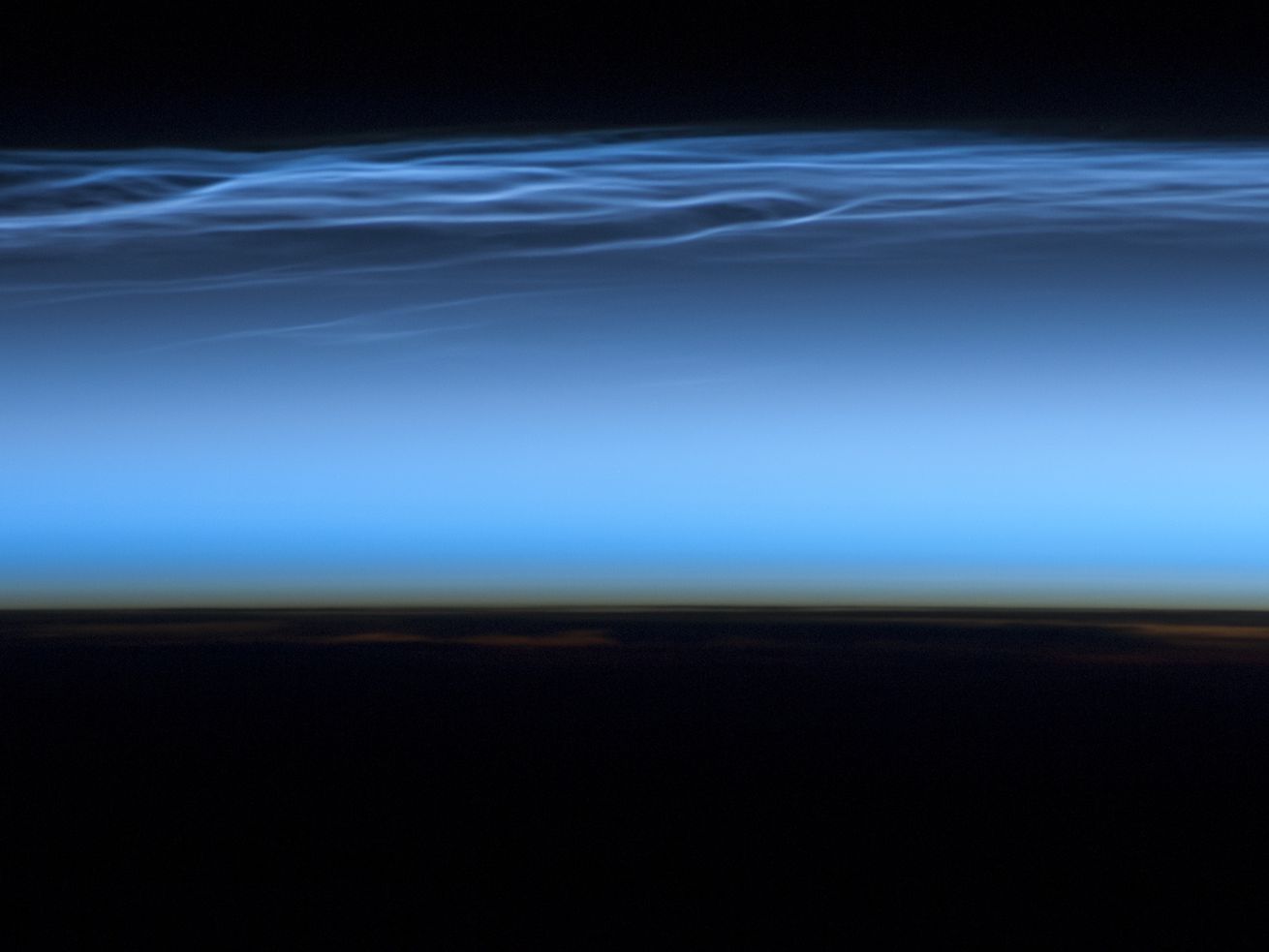 The rise of noctilucent clouds may be yet another unforeseen consequence of burning fossil fuels.

A certain form of mysterious shimmering, soaring cloud is starting to appear more often in the night sky, and scientists are working to understand why.

These wispy clouds are so high up in the sky that they reflect the sun’s light even after it’s well over the horizon, giving them an eerie glow in the twilight. Hence their name, noctilucent, meaning “night shining.”

They are often found at the far northern and southern reaches of the planet during their respective summers, although the clouds have occasionally been seen in other locales. They’re visible a couple hours after sunset and before sunrise as iridescent indigo feathers, as their ice crystals bend and reflect fleeting rays.

“They’re just gorgeous to look at, they’re fascinating,” said James Russell, co-director of the Center for Atmospheric Sciences at Hampton University and a researcher at NASA.

But their existence counters much of the conventional wisdom around clouds, and the fact that they’re becoming more common is yet another sign of how humans are reshaping not just the planet but also the upper atmosphere.

In Wednesday’s episode of the Unexplainable podcast, we delve into the mysteries around clouds and why they’re so important to our understanding of the future of the planet. Noctilucent clouds are a case in point.

There are two linked puzzles about noctilucent clouds. One is why they’re so high up, in a layer of the atmosphere where the raw ingredients of clouds are sparse to nonexistent.

Clouds need moisture condensed around tiny particles to form, and there are ample quantities of both in the troposphere, the layer of the atmosphere extending from the Earth’s surface to as high as 12 miles up. However, noctilucent clouds form in the mesosphere, between 30 and 50 miles above the Earth, where the air is cold, dry, and thin (hence their other name, polar mesospheric clouds).

The other puzzle about these clouds is their frequency. “Since 1885, the clouds have been changing and they’ve been increasing over time,” Russell said. The solutions to both of these puzzles very likely stem from human activity.

Noctilucent clouds were first described in the late 1800s. Some researchers speculate that early sightings occurred shortly after the explosive eruption of the Krakatoa volcano in 1883. The eruption sent soot and ash high into the sky, where it lingered for years, shading the sun and creating vivid sunsets around the world.

This eruption may have also lofted the tiny particles at high altitudes needed to seed noctilucent clouds.

But where are the aerosols, and moisture, coming from these days?

To answer these questions, scientists have run a number of experiments. Russell is the primary investigator of NASA’s AIM mission, a satellite that has been observing these clouds from 370 miles above the Earth’s poles.

Another NASA mission known as Super Soaker launched a rocket from Alaska, carrying 485 pounds of water into the mesosphere, where it was exploded in hopes of understanding the conditions needed to form noctilucent clouds. Researchers at CERN have also studied whether cosmic rays are reacting with chemicals in the mesosphere to create the particles that nucleate clouds.

The research is still ongoing, but there are some promising leads. There seem to be several sources of particles in the mesosphere, for instance. One is meteors that burn up in the upper atmosphere, leaving behind a fine layer of dust called meteoric smoke that moisture can glom onto to form clouds. But the rate of meteors hitting the atmosphere hasn’t changed much over the years.

What has increased in recent decades is rocket launches. As they pierce the heavens, rockets leave a wake of exhaust gases, particles, and water. “It is clear that rocket launches can perturb and create cloud layers that are noctilucent cloud layers,” Russell said.

As for the moisture, that may be coming from methane, a gas with surging emissions due to human activities like agriculture, land degradation, and natural gas extraction. When methane reaches high altitudes, it undergoes oxidation, where it reacts with oxygen catalyzed by sunlight and breaks apart, yielding water as one of its products.

Carbon dioxide emissions from burning fossil fuels are also having an effect. The gas heats up the planet beneath it when it reaches the lower atmosphere, and is the main driver of climate change. But at very high altitudes, like in the mesosphere, carbon dioxide can have a net cooling effect.

Lowering the temperature in this part of the atmosphere makes it easier for moisture to condense around particles and form clouds. And concentrations of carbon dioxide are increasing in the upper reaches of the atmosphere in line with increases closer to the ground.

So, from methane pollution, to the detritus of space exploration, to humanity’s ongoing appetite for coal and oil, the growing frequency of noctilucent clouds are yet another example of the ways human activity is dramatically altering our planet, from the ground to the farthest reaches of the atmosphere.

Republicans don’t want to acknowledge Trump’s rhetoric is fueling political divisions
March Madness is back for 2021 — and so are the fans
Vox Sentences: Hurricane Florence heads to the East Coast
Elizabeth Warren’s new remedy for corruption: a tax on lobbying
The many ways Muslim prisoners are denied religious rights in prison
7 questions about Harry and Meghan’s royal shake-up, answered