These huge new wind turbines are a marvel. They’re also the future. 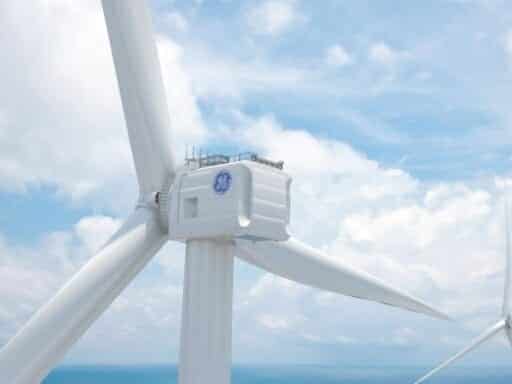 The latest model has blades longer than football fields.

The declining price of solar power gets more press, but there are big things happening in wind technology too. And I mean big.

The math on wind turbines is pretty simple: Bigger is better. Specifically, there are two ways to produce more power from the wind in a given area.

The first is with bigger rotors and blades to cover a wider area. That increases the capacity of the turbine, i.e., its total potential production.

The second is to get the blades up higher into the atmosphere, where the wind blows more steadily. That increases the turbine’s “capacity factor,” i.e., the amount of power it actually produces relative to its total potential (or more colloquially: how often it runs).

The history of wind power development has been the history of engineering taller and taller turbines with bigger and bigger blades. It’s a tricky and delicate business. Tall, skinny things, placed in higher winds, tend to bend and flex. When long turbine blades bend, they can crash into the tower, or hub, like this Danish system did in 2008 after its “brake” failed and it spun out of control:

So the third engineering challenge is to find designs and materials that can stand up to the stresses that come along with height and higher winds. Those stresses get quite intense — check out this video of engineers testing an enormous turbine blade by pulling it to and fro with “the weight of approximately 16 African elephants.”

Anyway, making turbines bigger and bigger is the name of the game. When it comes to land-based (onshore) turbines, that process begins to run into various non-technical limitations — transportation and infrastructure chokepoints, land use concerns, worries about views, large birds, shadows, etc.

But especially in Europe, wind power is increasingly moving out to sea. And out in the ocean, with land barely in sight, the only limitation on size is engineering. Consequently, offshore turbines today are vaulting up even faster than onshore turbines have over the past decade.

A vivid example of this trend popped up in early March (when I first published this story): GE Renewable Energy announced that it will be investing $400 million to develop a new monster turbine: the Haliade-X, which will be (at least until the next big announcement) the biggest, tallest, and most powerful in the world. The first units are expected to ship in 2021.

It will be impressive as an engineering feat, but the significance of growing turbine size goes well beyond that. Bigger turbines harvest more energy, more steadily; the bigger they get, the less variable and more reliable they get, and the easier they are to integrate into the grid. Wind is already outcompeting other sources on wholesale energy markets. After a few more generations of growth, it won’t even be a contest anymore.

What wind turbines are getting up to

To get a handle on how big this new GE turbine is, let’s start with some comparisons.

I called Ben Hoen, a research scientist at Lawrence Berkeley National Laboratory to get the latest numbers on wind turbine sizes. (He stresses that these are preliminary figures — LBNL has a report on this coming out in a few months, but he does not expect these figures to change much, if at all.)

According to Hoen, the average total height (from base to tip) of an onshore US turbine in 2017 was 142 meters (466 feet). The median turbine was closer to 152 meters (499 feet). In fact, Hoen said, the median is approaching the max. In other words, over time, US onshore turbines seem to be converging on roughly that height. Why? Because if you build higher than 499 feet, the Federal Aviation Administration requires some extra steps in their approval process, and apparently most developers have not found that worth the hassle.

The very tallest onshore US turbines are at the Hancock Wind project in Hancock County, Maine. Those — Vestas V117-3.3s, if you must know — are about 574 feet tall.

So that’s onshore. What about offshore? Well, as of yet, the US has one and only one operating offshore wind installation, the Block Island Wind Farm off of Rhode Island. Its turbines rise to roughly 590 feet.

How does the Haliade-X compare to all that? According to GE, it will reach 853 feet tall.

That would be, as far as I know, the tallest wind turbine in the world. As best I can tell from googling (as I said, these things are changing quickly), the previous record holder is an 809-foot onshore turbine in Germany.

Height isn’t all that matters, though. The Haliade-X can also boast a few other superlatives.

Rotor diameter is a measurement of the full sweep of the turbine’s blades (the diameter of the circle they define). All else being equal, greater rotor diameter means the turbine can harvest more wind.

In 2017, Hoen told me, US wind turbines had an average rotor diameter of 367 feet. The Haliade-X will have a rotor diameter of 722 feet, roughly double the average. The blades will be gargantuan, 351 feet long each, longer than a football field and longer, GE says, than any other offshore blade to date.

The massive rotor diameter, plus the steady offshore wind, plus the 12MW turbine (onshore averages around 3MW; offshore around 6MW), means that that the Haliade-X will have an unusually high capacity factor.

By way of comparison, in 2016 the US nuclear fleet had an average capacity factor of around 92 percent. (Given current markets, nuclear is only economic when running continuously, as baseload.) Coal and natural gas were 55 and 56 percent respectively. (Natural gas is that low because it frequently ramps up and down to follow swings in demand. Coal used to be up close to 80, but it is less and less economic to run coal plants at all.)

So modern US wind is up to 42.5 percent and natural gas is at 56 percent. The Haliade-X, according to GE, will have a capacity factor of 63 percent. That is wackadoodle, though it wouldn’t be the highest in the world — the floating offshore turbines in the Hywind Scotland project hit 65 percent recently.

Add all that up and, at a “typical German North Sea site,” GE says, each Haliade-X will produce about 67GWh annually, “enough clean power for up to 16,000 households per turbine, and up to 1 million European households in a 750 MW windfarm configuration.” (Suffice to say, the number would be smaller for energy-profligate American households.) That’s “45 percent more energy than any other offshore wind turbine available today,” according to the company.

Let’s consider what these rising capacity factors mean for wind.

I often return to this 2015 post by energy analyst Ramez Naam on the ultimate potential of wind power. “Wind at 60% capacity factor,” he wrote, “even at the same price per kwh of today, would be tremendously more valuable than it is now, with fewer limits to how much of it we could use.

Why is that? Several reasons.

A capacity factor of 60+ percent isn’t quite “baseload,” but it sure looks a lot less variable. So turbines like the Haliade-X would be more valuable even if the price of wind electricity stayed the same.

But of course it won’t stay the same; it has dropped 65 percent since 2009. A recent NREL report projected that innovations in wind power technology (of which bigger turbines is one of many) could drive it down another 50 percent by 2030. (Researchers at the University of Virginia are working on a design for an offshore turbine that will tower, no lie, 1,640 feet, higher than the empire state building.)

Say new US wind turbines reach an average hub height of 460 feet by 2025, roughly in line with current projections. According to NREL data, such turbines could hit capacity factors of 60+ percent across more than 750,000 square miles of US territory, and 50+ percent across 1.16 million square miles.

That much wind, at that capacity factor, with foreseeable advancements in wind tech, will produce power cheap enough to absolutely crush all competitors. And 2025 isn’t that far away.

With impeachment, America’s epistemic crisis has arrived
Trump’s denial of his coronavirus failings will be “one of the biggest propaganda battles in America...
Why nearly 8,000 Marriott workers are striking in 8 cities
Nevada primaries: Democrats are playing defense in two competitive House races
Retail workers are more vulnerable than ever. A new campaign wants to protect their jobs.
Hawaii is banning sunscreens that kill coral reefs