They say a preposition is something you should never end a sentence with. That’s nonsense. 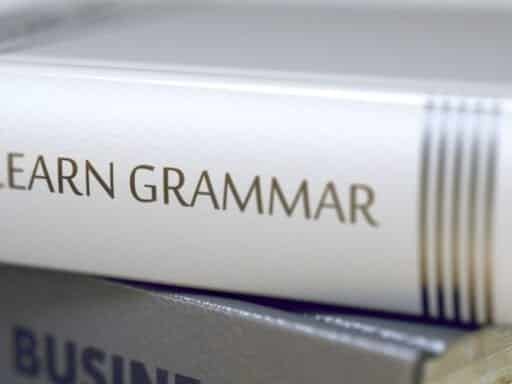 Welcome to the weekly Vox book link roundup, a curated selection of the internet’s best writing on books and related subjects. Here’s the best the web has to offer for the week of June 17, 2018.

And then! I found myself attracted to a display, a collection of books with silver-grey covers, very simple design. Plain. I would not have been drawn to an individual volume. But in aggregate! Compelling. I spent a good while poking through the pile, learning about the authors and the publisher, Persephone Books.

I was quite surprised to read that “Persephone Books reprints neglected fiction and non-fiction by mid-twentieth century (mostly) women writers.”

Be still my heart.

“I once moved to Paris so I could justify taking longer with an essay because ‘I’m working on it in Paris.’ (I stayed in Paris for months, experienced a total emotional breakdown, did not start the essay.) I was in a very rational place — it was about UFOs and the American southwest. Then while I was there I was like ‘…but maybe it’s also about Paris?’ It was not also about Paris.” —Brian Phillips, author of Impossible Owls

So why don’t the teenage spies grow up? Perhaps because teenage girls are less threatening to the “rigid masculinity” of espionage. One may find it easier to imagine a cheerleader taking down the bad guys—because it’s so implausible—than to think a woman could be the CIA’s best agent. The fantasy element of teenage spies is key. Of course teenage spies don’t exist, and since they don’t exist, sure, they can be female. And this fantasy is at the heart of the power of YA fiction: escapism.

What he conveys most powerfully is a yearning for a simpler time — a uniquely white yearning, because it is white people to whom history has been kindest. It is white people who seem to long for the safety of cloistered communities where everyone knows one another, where people know their place and are assured of what their lives may hold. Clearly, Santopietro identifies more with Scout, Jem and Dill than with, say, Boo Radley, the town recluse who probably wouldn’t yearn for that simpler time when the townspeople regarded him with open distance and mistrust.

The average reading time of all Americans declined not because readers read less but because fewer people were reading at all, a proportion falling from 26.3 per cent of the population in 2003 to 19.5 per cent in 2016. You could call this a compositional effect, but it’s a rather tautological one: reading is in decline because the population is now composed of fewer readers. And the assessment would be a little unfair: we don’t know that the survey’s non-readers are in fact never-readers. All we know is that, when Americans sit down to read, they still typically read for about an hour and a half, but fewer are doing so, or are doing so less often.

The industries I’ve worked in for most of my life — film, TV, theatre, publishing — have all been more or less entirely dominated by white Oxbridge men, and they still mostly are. These men and their lackeys have been the beneficiaries of positive discrimination, to say the least, for centuries. The world has always been theirs, and they now believe they own it.

Some of us have been fortunate enough to force a way through the maze and make a living as artists. It was a difficult and often humiliating trip, I can tell you. There was much patronisation and many insults on the way, and they are still going on.

Following the death of Oliver Cromwell, England was in a pretty weird place, and the English language was in a weirder one. The monarchy had been restored, but during Cromwell’s reign an awful lot of English writing had been stunted; for a time, plays were even banned, for fear of public political criticism. That’s a bigger deal than it sounds, because during the latter half of the 17th century, literacy rates in London—by far the highest in the country—were only around 20 percent. The language evolved on the stage, and that development was paused for a few decades.

Why Route 66 became America’s most famous road
Gone to pieces: Trump administration hopes to track and limit the debris threatening the space indus...
Democrats need a positive agenda on immigration now that Trump’s killed grand bargains
How Trump is letting polluters off the hook, in one chart
Schumer: DOD asked to house 20,000 immigrant children
Who is Trump latest pardon? Far-Right and Fascist Dinesh D'Souza