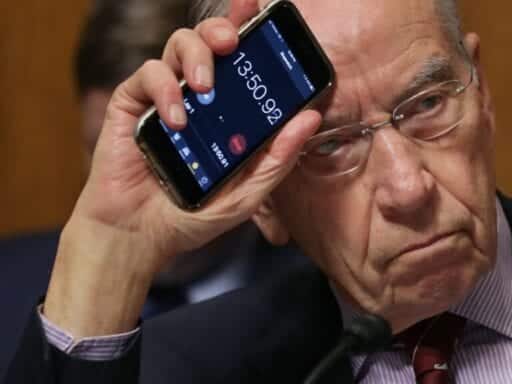 The Republican-controlled Senate was well on its way to having a floor vote to confirm Supreme Court nominee Brett Kavanaugh.

At least until a last-minute demand from Sen. Jeff Flake (R-AZ) asking for a one-week delay so that the FBI could investigate allegations of sexual misconduct and assault against Kavanaugh.

Before Flake’s surprise move, it was clear from the Senate hearing on Thursday that Flake’s Republican colleagues weren’t very interested in finding out the facts behind Christine Blasey Ford’s accusation that Kavanaugh sexually assaulted her at a high school gathering. Two other women — Deborah Ramirez and Julie Swetnick — came forward after Ford with separate stories accusing Kavanaugh of sexual misconduct and assault. Kavanaugh has denied all the allegations against him.

We reviewed every single question senators asked during last Thursday’s hearing, when the Senate Judiciary Committee questioned both Ford and Kavanaugh. The hearing was supposed to be an opportunity for the senators to learn more on the accusations against Kavanaugh.

But our analysis shows that Republican senators weren’t particularly interested in asking Kavanaugh about the accusations or potentially related matters, including his drinking and his attitude toward women. In addition, they weren’t interested in learning about more about the allegations themselves — beyond Kavanaugh’s denials.

Rather, their primary line of questioning was about Democrats and the process that led to the hearing, which Republicans uniformly denounced. They tried to build up a narrative that the accusations against Kavanaugh were a last-minute effort to sabotage him.

Below is every single question asked by Democrats, Republicans, and the prosecutor Republicans gave time to, Rachel Mitchell, which we’ve sorted by broad categories.

The election result the stock market is really afraid of
How Trump made it that much harder to become a US citizen
I love your annoying Instagram challenges.
Starz’s The Rook is formulaic to a fault — but it has one storyline unlike anything else
The key senators to watch for Kavanaugh’s confirmation
The debate around putting an end to all government shutdowns, explained