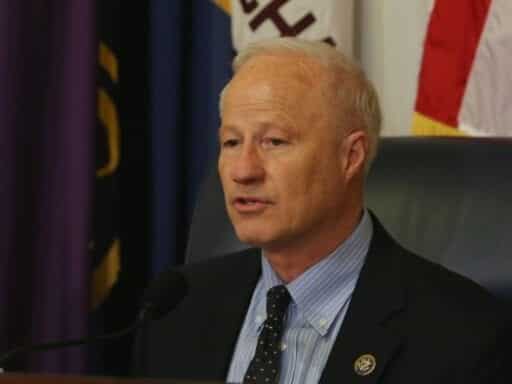 Rep. Mike Coffman spelled it out in a tweet.

Rep. Mike Coffman — a moderate Republican whose Colorado district is seen as a toss-up in this fall’s midterms — called for President Donald Trump to fire White House adviser Stephen Miller in a heated tweet on Thursday.

As part of his post, Coffman argued that someone in the administration should be held accountable for the separation of at least 2,300 children from their parents.

“The President should fire Stephen Miller now. This is a human rights mess,” Coffman wrote. “It is on the President to clean it up and fire the people responsible for making it.”

I’m glad the President ended the border separation policy, but there’s more work to do. I’m going to the border in TX myself this weekend to see the situation firsthand and learn more about what needs to get done. The President should put a General, a respected retired CEO….

or some other senior leadership figure on the job of making sure each and every child is returned to their parents. And the President should fire Stephen Miller now. This is a human rights mess. It is on the President to clean it up and fire the people responsible for making it.

According to a New York Times report, Miller was one of the most prominent advocates for a “zero tolerance” approach that included family separation, even as others in the administration shied away from the idea.

Miller, a notorious hardliner on immigration, has been a frequent target of Democratic lawmakers, but Coffman’s tweet marks a notably outspoken critique by a sitting Republican. (Coffman also surprised many earlier this week when he offered to introduce a Democratic bill aimed at barring family separation from Sen. Dianne Feinstein.)

Dear @realDonaldTrump: Last time I checked, Stephen Miller is not a Democrat. Ripping children away from their parents is YOUR ADMINISTRATION’S REPUBLICAN POLICY.

Your new policy is evil. Reverse it now. https://t.co/8VkXSBzhIE

Trump signed an executive order on Wednesday that seeks to keep families together while they are being held in federal custody, although it does little to help children who have already been separated from their parents.

As Vox’s Tara Golshan and Dylan Scott report, the president’s stance on Republican immigration legislation appeared increasingly muddled on Thursday and prompted a sharp critique from Coffman as well: “I think the notion of Republicans putting up two bills and the president saying, ‘Oh, I’d be happy if either one passes,’ I think was not a workable strategy,” he said after House Republicans failed to pass a conservative immigration bill. “I don’t understand where the administration is right now on this issue.”

Coffman represents one of more than 20 districts currently held by Republicans that Hillary Clinton won in 2016. Unlike other Republicans in solidly red districts — like Reps. Martha Roby and Mark Sanford — who have seen their critiques of Trump come back to bite them in the polls, Coffman’s comments could potentially help him win over voters who are closer to the center.