This Columbus Day, a reminder Christopher Columbus was “a murderous moron” 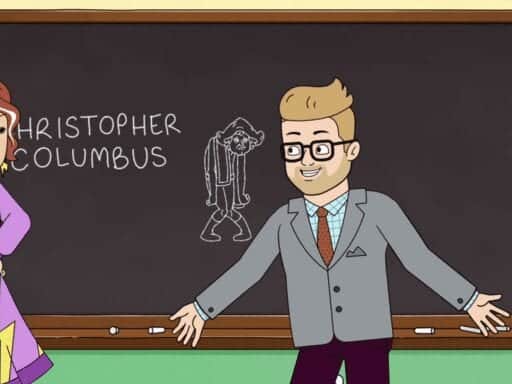 Adam Ruins Everything explains that the popular myth of Christopher Columbus gets a lot wrong.

It’s Columbus Day again, so it’s as good a time as any to clarify that much of what a lot of people were taught about Christopher Columbus in elementary school was very wrong.

In a short video from 2017, Adam Ruins Everything goes through the major myths about Columbus, concluding that, contrary to the popular belief of a brilliant explorer, Columbus was actually “a murderous moron.”

“The real story of Columbus is even worse and weirder than you think,” host Adam Conover explained.

For one, Columbus did not disprove that the Earth is flat and discover that the world is round. “In his time, it was already common knowledge,” Conover said. In fact, humans have known that the Earth is round for more than 2,000 years, with ancient Greeks like Aristotle and Eratosthenes saying as much in their own works.

So if everyone knew that, why didn’t others try sailing west? “Back then, they didn’t know the Americas existed. So navigators thought there was no way a ship could make it all the way from Europe to Asia,” Conover said. In short, navigators thought they would run out of supplies mid-journey and die.

Okay. So maybe Columbus was at least brave for willing to try the long journey from Europe to Asia. But that’s not quite true either, Conover noted: “He set sail because he was a doofus who was terrible at math. Instead of trusting the experts, Columbus believed the Earth was thousands of miles smaller than it actually was.” As Elizabeth Kolbert wrote in the New Yorker, Columbus even “reasoned that the world was shaped like a ball with a breastlike protuberance.”

In retrospect, this is obviously ridiculous. But competition in the spice trade, Conover explained, was fierce at the time. So the Spanish monarchs Isabella and Ferdinand went along with Columbus’s proposal on the off-chance he was right.

Columbus landed on what he thought was Asia but was in fact some Caribbean islands. He’s often given credit for discovering these islands, but, as Conover pointed out, they were already occupied. This is key to Columbus’s story, because what follows was truly awful.

After the indigenous Taino people on the island of Hispaniola were hospitable to Columbus, he “repaid their kindness by returning with 17 ships and 1,200 men so he could enslave the Taino and steal their gold,” Conover said. “There was only one problem: They didn’t have any.” A slaughter followed, reducing the native population from the hundreds of thousands to the hundreds. (Much more on all of this in Vox’s Dylan Matthews’s great explainer on Columbus’s tyranny.)

This is what Columbus would do for the rest of his days: sail around the Caribbean, murdering indigenous people. He died thinking that he had been doing all of this in India, never realizing he had set foot on lands that European navigators didn’t know existed at the time.

Over the next few hundred years, Columbus wasn’t well known until Washington Irving, who wrote The Legend of Sleepy Hollow, authored the first major English biography of Columbus in 1828. The positive story of Columbus — how he proved the Earth was round and discovered America — was embraced by Italian immigrants to America, who were in search of an American hero as they faced discrimination and persecution in the US.

“To help prove that Italians were a part of the American story, Italian Americans latched onto Irving’s version of Columbus, and promoted it like crazy,” Conover said. “And that’s the true story of how an incompetent and vicious nobody became the national hero we celebrate today.”

Of course, not everyone celebrates Columbus. This Columbus Day, many people are pushing for another holiday — Indigenous Peoples’ Day — to honor the victims of Columbus’s cruelty.

Watch: Why the US celebrates Columbus Day