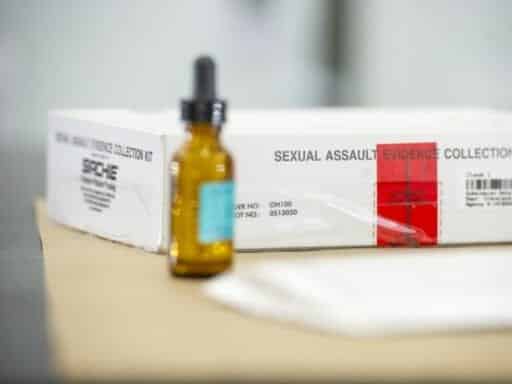 The MeToo Kit is marketing itself as an alternative to a professional examination. It’s unlikely to stand up in court.

“Your experience. Your kit. Your story. Your life. Your choice.”

That’s the pitch a Brooklyn company is making for a product called the MeToo Kit: a do-it-yourself rape kit designed to allow survivors to gather physical evidence at home, rather than at a hospital.

The kits are not yet available for purchase, but the idea has already sparked criticism. In a cease-and-desist letter to the company, Michigan Attorney General Dana Nessel argued that “an at-home evidence kit does not address the health care needs of many sexual assault survivors,” and that any evidence collected might not be admissible in court.

“We are advocates for all options for survivors” as long as those options are not dangerous or harmful, Morgan Dewey, communications director for the group End Rape on Campus, told Vox. “This is in fact harmful.”

Company founder Madison Campbell called Nessel’s criticisms “deeply disappointing” in a statement released Friday, arguing that instead of criticizing MeToo Kit in the press, Nessel “should be more concerned with creating a productive dialogue in which my colleagues and I can address some of the concerns she may have.”

The kit is in its early stages, Campbell told Vox in an email on Thursday, stressing that she wanted to work with experts on making sure the evidence gathered by users could be admissible in court. She said the idea for the kit was rooted in her personal experience as a survivor of campus sexual assault.

“After my sexual assault, I did not even want to touch myself — let alone let anyone touch my body or console me,” she told Vox. “We believe that it should be a survivor’s right to capture this evidence within the comfort of their own home.”

Experts agree there are real barriers keeping some survivors from getting medical care after an assault, including fears that a health care provider will discriminate against them based on their gender identity or report them to immigration authorities. But they say the solution to those problems is systemic change — not an at-home kit that could cause survivors further problems.

The MeToo Kit encourages survivors to collect DNA evidence themselves. Experts say that comes with a host of problems.

According to the Rape, Abuse, and Incest National Network (RAINN), a rape kit is a container that includes some materials necessary for a sexual assault forensic examination — the term is also used by some to refer to the exam itself. Such an exam has several parts, Dewey said.

A trained forensic examiner or nurse will collect any DNA evidence of the assault from the survivor’s body, as well as performing a full medical examination that can be used as evidence if the survivor chooses to pursue a criminal case. The examiner will also perform STI testing and offer STI treatment and pregnancy prevention options, Dewey said, as well as treatment for any injuries the survivor has sustained. According to RAINN, DNA evidence usually needs to be collected within 72 hours to be usable by a crime lab, but an examiner may be able to collect other kinds of evidence after this timeframe.

At the hospital where the examination is performed, survivors will also often have access to a rape crisis advocate who can help connect them with counseling and other services, Dewey added.

The MeToo Kit aims to let users complete one part of the process — DNA collection — themselves. “MeToo is founded on the principle that you should be able to take back control,” the company website says.

“With MeToo Kit, we are able to collect DNA samples and other tissues, which upon testing can provide the necessary time-sensitive evidence required in a court of law to identify a sexual predator’s involvement with sexual assault,” the website claims.

The company also advertises the kit as a way to prevent sexual assault from happening in the first place: According to the website, the company believes the kits will one day be purchased by people around the world “for themselves and loved ones, not only as a viable resource, but as a symbol of protection and hopeful deterrent to assault.”

“If every freshman during orientation was given a kit, we believe that it would not only enable survivors the privacy and comfort of collecting evidence at home, but also create a psychological deterrent on campus,” Campbell told Vox. “Perhaps the predatory nature of parties on college campuses would change if everyone knew that everyone had a kit.”

The kit is not yet available for purchase, and it’s not clear what its price will be. But it’s been the subject of public criticism since late last month, when Nessel, Michigan’s attorney general, sent the company a letter detailing a variety of concerns. The attorney general’s office learned of the kit from a sexual assault prosecutor, who learned of it from a Title IX coordinator who had been contacted by the company, a spokesperson for Nessel’s office told Vox.

The MeToo Kit website mentions a university pilot program and asserts that “every campus needs MeToo Kit,” but it’s not clear if the company has partnered with any universities.

The kit’s marketing campaign “misleads victims into thinking they are collecting all the evidence that could be collected” after a sexual assault, Nessel’s letter said. In fact, a trained professional would be able to document injuries and conduct a thorough examination in ways the kit doesn’t allow for.

“While your website suggests the at-home kit results will be admissible in Court, we are skeptical of that proposition,” Nessel’s letter continues.

Rape kits have to be handled in a specific way to maintain a chain of custody, ensuring that no one tampers with the kit between collection and examination by authorities. A do-it-yourself kit would not maintain that chain, Nessel and other critics have said, which could mean any evidence gathered would be thrown out of a legal case.

“We cannot see a way that these would stand up” in court, Dewey told Vox.

In Michigan, a medical examination and rape kit are free to survivors by law if provided within 120 hours of the assault, Nessel’s letter points out. Around the country, the cost of a rape kit varies based on a survivor’s insurance and other factors, Dewey said. But local rape crisis centers often have funding available to help with the cost.

It’s important to consider all the services offered as part of a sexual assault examination that aren’t covered by the MeToo Kit, Dewey added: “Framing the MeToo Kit as a substitute for all of the additional resources that are given to a survivor in a hospital is false.”

Some have also taken issue with the idea of a company naming a product after #MeToo, a movement founded by activist Tarana Burke more than a decade ago to help survivors of sexual violence. “This company is shamelessly trying to take financial advantage of the ‘Me Too’ movement,” Nessel said in a public statement accompanying her office’s cease-and-desist letter.

Advocates say there are better ways to support survivors

Campbell, the MeToo Kit founder, responded to Nessel’s criticisms in a statement on Friday. The claim that MeToo Kit is trying to take financial advantage of the movement is “patently false and downright shameful,” Campbell said in the statement.

“For far too long, sexual assault victims have been left behind, limited in the options they can choose after such a traumatic event,” she added. “MeToo Kit Company looks forward to a time when it can begin truly productive dialogue with Attorney General Nessel and anyone else who may have concerns or suggestions.”

Meanwhile, Campbell told Vox on Thursday that the kit is not intended as a substitute for medical care. “We believe that every survivor should be encouraged to seek proper health care after an assault, and we encourage users to do this,” she said. “However, there is still a large portion of survivors who never get the chance to go to the hospital.”

She’s also open to changing the product’s name. “The kit was named MeToo because it immediately identifies what the kit is there to support — survivors of sexual assault who have been silenced,” Campbell said in her email. “If the name of the product interferes with helping survivors, I will change the name.”

Campbell said the kit is still in development, and she is hoping to work with experts, including Nessel and other state attorneys general, to improve it before its release.

Nessel’s office has had some communications with MeToo Kit’s attorney, the spokesperson said. “We notice they are adjusting their marketing pitch based on the concerns we have raised, but what continues to trouble us is the disregard for the needs of victims who have been assaulted,” she added in an emailed statement.

The MeToo Kit is responding to a real problem: “Going to a hospital erases some anonymity that you have as survivors,” Dewey noted. Survivors may fear seeking care if they are undocumented, especially given the Trump administration’s policies and rhetoric around undocumented immigrants. Trans survivors may be worried about going to a hospital if they have faced discrimination in health care settings in the past, especially given a proposed Trump administration rule that would let doctors refuse to treat trans patients.

Simply the act of going to the doctor can be traumatic for some survivors. Campbell told the Brooklyn Daily Eagle she is a survivor herself and that all she wants to do is “give survivors time to process their trauma.”

But what’s needed to help survivors is large-scale change, Dewey said. End Rape on Campus supports legislation like the Equality Act, which would ban discrimination based on gender identity in a variety of settings. The group also works with immigrants’ rights organizations like Families Belong Together to dismantle barriers to care for undocumented people, she added.

The MeToo Kit isn’t the first product marketed as a way for ordinary people to stop sexual assault. A number of apps allow users to notify friends if they feel unsafe or activate an alarm to frighten would-be attackers. And in 2014, a group of college students developed a nail polish that would allow wearers to detect date-rape drugs in a drink by dipping a finger inside.

The innovation isn’t a bad thing, Dewey said. “One really beautiful thing with the advances in technology is that people are wanting to be creative and find solutions for survivors.”

However, she cautioned that these solutions “are not getting at culture change.” Instead, such technology “puts the onus on survivors to make sure they’re keeping themselves safe.”

Why Hamilton is as frustrating as it is brilliant — and impossible to pin down
I asked Wall Street insiders whether they’d prefer Elizabeth Warren or Donald Trump. It turned out t...
Why we’re still years away from having self-driving cars
Should social media companies be legally responsible for misinformation and hate speech? 2020 Democr...
In 2020, scientists documented hundreds of new species. Here are a few.
4 false claims in under 30 words: Kevin McCarthy’s IG report tweet is an exercise in gaslighting