This country gave all its rivers their own legal rights 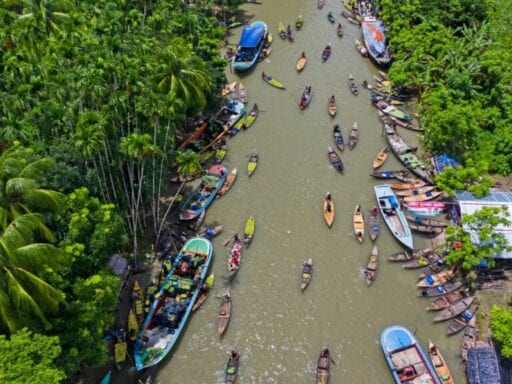 Share
Loading...
An aerial view of a river in Bhimruli, Jhalokathi, Bangladesh. All rivers in the country now have legal rights. | Mohammad Saiful Islam/NurPhoto via Getty Images

It’s part of a nascent “rights of nature” movement that’s inspiring many — but encountering problems when it comes to enforcement.

Bangladesh is sometimes known as the “land of the rivers.” It’s got hundreds of them — and over the years, they’ve been getting more and more polluted. But as of early July, every single one of them has a remarkable new level of protection: The Bangladeshi Supreme Court has given all rivers in the country legal rights.

Now, people who damage a river can get taken to court by the government-appointed National River Conservation Commission. They’ll be tried as if they’d harmed a living entity, because each river now has the right to life. That means the river’s government-designated human representatives can sue on its behalf when it’s being endangered.

Bangladesh isn’t the first place to pass such a law. In the US, Ohio voters in February granted Lake Erie the legal right to “exist, flourish, and naturally evolve,” and recent years have also seen national and state laws granting rights to rivers and forests from New Zealand to India to Colombia.

It’s all part of the nascent “rights of nature” movement, which argues that instead of viewing nature as property to be owned, we should recognize that it has its own inalienable rights similar to the ones we enjoy. Activists in the movement want us to give the environment a more central place in humanity’s expanding moral circle — the imaginary boundary we draw around those we consider worthy of moral consideration.

But even among the countries that have embraced the rights of nature, Bangladesh now stands out as having done something unprecedented. “What’s unique about Bangladesh is that they declared all rivers to have this status,” said Ben Price, the national director for the Community Environmental Legal Defense Fund (CELDF), a nonprofit public interest law firm that helps people facing threats to their local environment. By contrast, other countries have granted rights only to individual bodies of water.

“In Bangladesh, the river is considered as our mother,” Mohammad Abdul Matin, general secretary of the Dhaka-based environmental group Bangladesh Poribesh Andolon, told NPR. “The river is now considered by law, by code, a living entity, so you’ll have to face the consequence by law if you do anything that kills the river.”

The country already had fines in place to discourage people from harming the waterways, but those penalties weren’t working well enough to prevent pollution, illegal dredging, and the encroachment of human settlements. The Supreme Court hopes its landmark ruling will change that. Noting that “water is likely to be the most pressing environmental concern of the next century,” it called for rivers to be protected “at all costs.”

That’s music to the ears of environmentalists, but others argue that granting rights to rivers does come with real costs, and that they’re too high. With more communities getting interested in enshrining the rights of nature in law — Price said that activists in Europe, Asia, and Australia have reached out to CELDF for help — now is a good time to explore the difficulties that are likely to arise as this movement spreads.

Three problems with enforcing the rights of nature

Even as the rights of nature movement has inspired new legislation around the world, it’s also made clear how ill-equipped governments are to enforce it.

For one thing, once a river gets rights, what happens to all the people who live off it? In Bangladesh, millions — fishers, farmers, and their families — live in informal settlements or slums alongside the rivers and depend on the waters for their livelihoods. Now some are being evicted.

“The government must take stock of poor communities who need resettlement or protection from industries and real estate developers,” said Matin. “If enacted well, the verdict will be helpful in returning the rivers to the people who have historically depended on them.”

It’s also important to note that in some countries where these laws have been enacted, including Bangladesh, nature may now enjoy more rights than some humans in those societies do.

Bangladesh is currently hosting hundreds of thousands of refugees who have been driven out of neighboring Myanmar; these refugees, many of them women and children, lack legal status in Bangladesh and are restricted from attending Bangladeshi schools or working. The Bangladeshi government is also trying to find ways to get rid of the refugee population — through forced repatriation to Myanmar or sending refugees to a remote island accessible only by boat. Local officials have sought to justify this by saying the refugees are destroying the local environment.

A second problem is jurisdictional. Rivers don’t obey borders — they often traverse more than one country. If a certain country has granted rights to a river but a neighboring country hasn’t, that makes it difficult to legally protect the waterway from environmental harm. Bangladeshi environmental activists are already talking about how they won’t be able to compel India to comply with the new law on rivers.

India itself dealt with this conundrum after the high court in Uttarakhand state granted personhood status to the Ganges and Yamuna rivers in 2017, appointing the state government as the rivers’ legal guardian. The state government soon challenged this law in India’s Supreme Court on the grounds that it was impractical because the river stretched far beyond Uttarakhand. The court agreed and stripped the rivers of their short-lived legal rights.

A third, related problem is that rights of nature laws tend to get tied up in court — and not everybody has the kind of money required to file a lawsuit. The risk, then, is that whoever has the funding may get to impose their will.

We’ve already seen an example of this in Ecuador, where an NGO called the Global Alliance for the Rights of Nature sued a construction company that wanted to build a road over a river. The NGO won in court, but the company didn’t obey the ruling — and the NGO reportedly didn’t have enough money to launch a second court case against the company. So the ruling wasn’t properly enforced.

In Ohio, the Lake Erie Bill of Rights — the groundbreaking legislation that allows citizens to sue on behalf of the lake when it’s being polluted — is caught up in legal wrangling right now. The day after Toledo residents passed the bill in a special election in February, a corporate firm representing agribusiness interests filed a federal lawsuit against the city.

“We expect this kind of pushback because there are competing interests: The community needs healthy drinking water, while the business community has an interest in making money,” Price told me. The lake is currently experiencing severe algae blooms, and the city of Toledo just filed a new motion trying to get the lawsuit against the bill of rights dismissed.

How the rights of nature idea took off

In 1972, the case of Sierra Club v. Morton came before the US Supreme Court, leading to a deliberation over whether nature should have its own rights. The Court decided the answer was no, but Justice William O. Douglas dissented. “Contemporary public concern for protecting nature’s ecological equilibrium,” he wrote, “should lead to the conferral of standing upon environmental objects to sue for their own preservation.”

That same year, law professor Christopher Stone made a splash with an article titled “Should trees have standing?” It catalyzed other academics to write a slew of articles and books considering whether natural environments ought to have rights enshrined in law.

In 2006, that question left the ether of academia and came to bear directly on toxic sewage sludge, which had been dumped in Tamaqua, Pennsylvania. Residents fought for — and won — the first rights of nature law in the world. Two years later, Ecuador became the first country to enshrine the rights of nature in its constitution, thanks in large part to the work of indigenous activists.

Since then, the victories have come fast and furious. In 2014, New Zealand recognized the legal rights of the Te Urewera forest. In 2017, it also declared the Te Awa Tupua river to have legal personhood. That same year, Colombia granted rights to the Atrato River and India recognized the Ganges and Yamuna rivers as legal persons.

In 2018, the Amazon rainforest got rights, and for the first time, so did a specific plant species: the wild rice known as manoomin, one of the Anishinaabe people’s staple crops. And this February, Ohio voters passed the Lake Erie Bill of Rights.

Granting the status of personhood to a natural environment may seem like a bizarre legal fiction, but it’s no more bizarre than the idea that corporations should enjoy that same status, which has been with us since the 1880s.

If we find it strange to view nature the way we view people, that may just be because we’ve grown up in an anthropocentric intellectual tradition that treats the natural world as an object to be examined and exploited for human use, rather than as a subject to be communed with and respected.

“The idea that we can be separate from nature is really a Western reductionist way of looking at the world — we can trace it back to Francis Bacon and the scientific method,” said Price.

He told me that just as women’s suffrage and the abolition of slavery were once unthinkable but gradually became accepted and normalized, the rights of nature idea seems odd now but will eventually gain social currency. “For the rights of nature to be understood and become something we’re comfortable with is going require a paradigm shift, just like the end of slavery did,” Price said.

That paradigm shift may entail nothing less than a total rejection of capitalism, according to Eduardo Gudynas, the executive secretary of the Latin American Center for Social Ecology in Uruguay. He argues that attempts to reduce environmental devastation while staying within a capitalism framework won’t be enough to address the climate crisis.

“The debate around the rights of nature is one of the most active frontlines in the fight for a non-market-based point of view,” Gudynas told me. “It’s a reaction against our society’s commodification of everything.”

Brazil has already lost 30 Manhattans of Amazon rainforest this year
When is the next presidential debate? It’s scheduled for October 15.
Nothing is going right for Paul Manafort lately
Trump’s not sure about believing climate science. The Saudis and Putin get the benefit of the doubt.
Gov. Steve Bullock just made the Montana Senate race competitive for Democrats
Delta’s CEO says the Boeing 737 Max 8 scandal has “traumatized” the aviation industry