This goofy bird vs. the fossil fuel industry 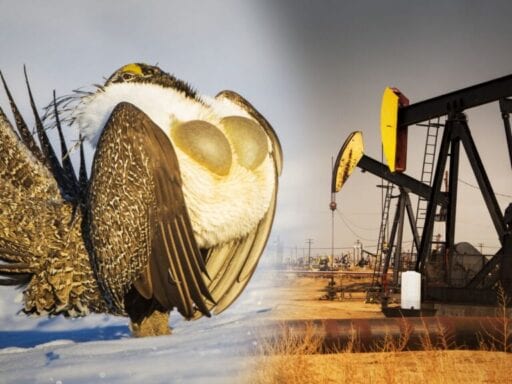 The sage grouse occupies a nearly mythical status in the American West. It is one of the few species whose diet consists of sage brush, a dense, desert shrub that blankets several Western states. Lewis and Clark observed this “fowl” on their Westward expedition, making note that they managed to eat the “bulb and buds of this pulpy, leafy thorn.”

Today, its bizarre male courtship dance is a spectacle that draws tourists to remote regions where they mate. The sage grouse has evolved to survive for tens of millions of years in some of the most brutal climates.

But sage grouse numbers have been on the decline for the past century because of human impact. They once numbered in the millions, but now the habitat has shrunk in half; researchers estimate there are only about 500,000 birds left today. A fire-prone invasive grass species called cheatgrass is rapidly replacing sage brush. Plus, sage grouse don’t like to live around tall structures because they look like perching places for predators, so wind farms and other kinds of development threaten the bird.

But their habitat intersects with oil and gas fields, particularly in resource-rich Wyoming, where close to half of the sage grouse population resides. This means the fossil fuel and mining industries have the most to gain from weak conservation policies for the sage grouse.

The sage grouse is considered an indicator species, seen as a proxy for the survival of the entire sage brush ecosystem — including the 350 plant and animal species that share it. That’s in part because of its reliance on the sage brush as food, but also because its mating dance makes the bird reliably easy to track.

For this reason, it has become a sort of poster child for conservation of the American West — countless land management policies have been passed in the sage grouse’s name. That includes a landmark conservation plan passed by the Obama administration’s Department of Interior in 2015, which was supported by both industry and conservationists. The plan included bans and restrictions on mining and oil and gas leasing on sage grouse habitat.

But just two years later, President Trump’s Department of Interior isn’t honoring the plan. That shift in policy coincides with new leadership at the Department of Interior: DOI Secretary David Bernhardt once lobbied on behalf of the same mining and oil and gas companies that now stand to benefit from not enforcing the 2015 plan.

This shift also gives new symbolism to the sage grouse: It’s not just an indicator for its ecosystem, but an indicator of the power that fossil fuel and mining companies have over our government.

Nepotism and the 2020 election, explained
Biden’s $400 billion Covid-19 plan, explained
Donald Trump is continuing his feud with John McCain — even after McCain’s death
The racist history of Trump’s “When the looting starts, the shooting starts” tweet
Vox Sentences: Oh, there’s also a debate tonight
A sleep expert has some tips for your quarantine insomnia