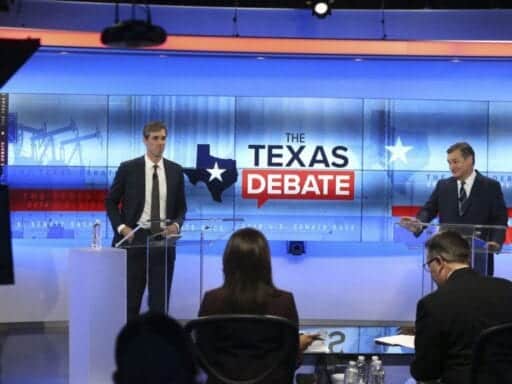 The guide to House and Senate races scores candidates on their positions on climate change and a carbon price.

Climate change, a major threat to the United States, has become impossible to ignore this election season, and is finding its way into midterm debates, along with gun violence, health care, and immigration.

In places like Florida, the devastation wrought by Hurricane Michael placed the consequences of the warming world front and center in the minds of many voters. And earlier this month, the Intergovernmental Panel on Climate Change warned that the world may have as little as 12 years to limit warming this century to 1.5 degrees Celsius.

At the same time, clean energy is booming, but many states are seeing a concerted push to roll back climate policies and to boost fossil fuels.

Yet despite mounting concerns about climate, there aren’t a whole lot of tools out there to help voters figure out where candidates actually stand on climate change and related issues.

Karyn Strickler, president of Vote Climate US PAC, told Vox that what’s unique about her guide is not only that it focuses on climate change, but that it scores both incumbents and challengers. (The PAC, she added, is not funded by any billionaires but “a few small funders who care” but did not say whom.)

For incumbents, the guide scores their votes on climate-related bills, their stated positions on climate change, any leadership roles they’ve taken on the issue, and their position on a carbon price.

Challengers, who may not have a voting record on climate change, are graded on their views of climate change and their position on a carbon price.

From there, the group calculates a score for each candidate. Looking at current officeholders, the results are not surprising. Here are the senators with perfect scores:

And here are the zeroes:

Sen. Ted Cruz (R-TX), for example, voted against an amendment on a bill to price carbon emissions and voted for an amendment that would prohibit Congress from passing such a fee.

“The climate has been changing from the dawn of time,” Cruz said in a debate. “The climate will change as long as we have a planet Earth.”

His challenger, Democrat Beto O’Rourke, has an overall score of 96.25. What kept him short of acing the ranking is that the guide “could not find statements by the Congressman publicly advocating for a fee on carbon.”

“We all know that there are differences between Republicans and Democrats on the issue, but to me what was stunning was the extent of the divide between the parties,” Strickler said. “What this demonstrates is that climate politics are overwhelmingly driven by party.”

Does that mean Republicans should get graded on a curve? Should a Republican that doesn’t call climate change a hoax get a boost given where the rest of the party stands? “That might be fair if we weren’t in an urgent temperature rise scenario,” Strickler said. “I would never give them the benefit of a higher score just because [the rest of the party] are so backward.”

Climate change is starting to emerge as a campaign issue

Now, we know few voters pick candidates based on environmental positions alone. “I would not suggest that it’s the top-tier issue,” said Pete Maysmith, senior vice president for campaigns at the League of Conservation Voters Victory Fund.

The League of Conservation Voters has its own scorecard, but it focuses only on officials in office and covers environmental issues writ large rather than climate change in particular. The Sierra Club has a similar guide.

But as the world warms, its consequences are hitting closer and closer to home. Droughts, storms, declining rivers and snowpack, and intense heat — events that were worsened by climate change — have cost billions of dollars in damages and taken thousands of lives across the United States over the past year.

So it makes sense that some running for office have used climate change as a way to distinguish themselves. “I think what matters to voters is that the issue connects in some way to their life,” said Maysmith.

It was refreshing to see CNN’s Jake Tapper open the Florida gubernatorial debate between Republican Ron DeSantis and Democrat Andrew Gillum earlier this month with a question about climate policies. Floridians had recently been battered by Hurricane Michael, a storm that strengthened startlingly fast in part due to warming water. Many of Florida’s beaches were littered with dead animals this year after a toxic red tide, a phenomenon also worsened by climate change.

“There is a scientific consensus that warmer waters from climate change are making hurricanes stronger as well as a stark warning that the world just received from the United Nations on climate change,” Tapper said.

The New Jersey Star-Ledger, in its hilariously tepid endorsement of Democrat Robert Menendez for Senate, cited his efforts on climate change as a bright spot on his record.

Candidates in midterm election races in states like New Mexico, Illinois, and Nevada have brought up climate change on their own as well, promoting their own policies to cut greenhouse gases and promote clean energy. The IPCC report also came up in other congressional debates.

Trump: “The concept of chokehold sounds so innocent, so perfect”
Section 230, the internet free speech law Trump wants to change, explained
Scientists explain why it’s unlikely the coronavirus escaped from a Chinese lab
What two fictional Gileads can teach us about America in 2018
Rihanna is mostly succeeding in her mission to make a more inclusive lingerie line
Belarus’s historic antigovernment protests, in photos