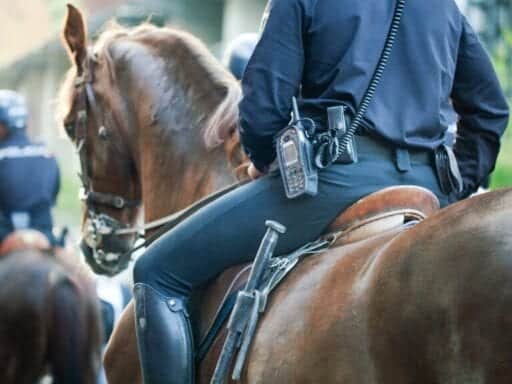 Less than two weeks later, Texas Rangers have found “nothing that warrant[s] a criminal investigation.”

Less than two weeks after a Texas police department apologized in the wake of a viral photo showing two white police officers on horseback leading a handcuffed black man by what appeared to be a rope, the Texas Rangers have announced that there will not be a criminal investigation into the incident.

The announcement comes as the Galveston Police Department continues to face criticism for the controversial August 3 arrest. On that day, two officers arrested 43-year-old Donald Neely on suspicion of criminal trespassing. However, only mounted officers on horseback were available at the time, according to the department, meaning that police would need to wait for a cruiser to arrive before they could transport the man.

Rather than wait, the officers, identified in a subsequent police statement as P. Brosch and A. Smith, decided to move Neely to a nearby mounted officer staging area. To do so, they “clipped” a blue rope to Neely’s handcuffs and led him down the street as he walked behind the officers’ horses.

A photo of the arrest, which was taken by an anonymous person, quickly went viral. Many argued that the image of a handcuffed black man walking behind officers was eerily reminiscent of the use of patrols to catch enslaved men and women who fled Southern plantations before the Civil War. And that history is particularly prominent in Galveston, a Texas island where slavery continued for more than two years after the Emancipation Proclamation.

This is just sickening and uncalled for.

This young black man was put on a leash while handcuffed between two mounted horses in Galveston, Texas.

Police officers arrested Donald Neely, who is Black, for trespassing, handcuffed him, attached a rope to the handcuffs and led him through the streets of Galverston on mounted horses. All as though they were slave masters, and he were their slave. https://t.co/G0ryVdi8Mj

On Facebook, Adrienne Bell, a Democrat running to represent Texas’s 14th Congressional District, which includes Galveston, wrote that the images of the arrest were “a scene that has invoked anger, disgust, and questions from the community.”

“It is hard to understand why these officers felt this young man required a leash, as he was handcuffed and walking between two mounted officers,” she added on Twitter.

On August 5, the department apologized for the arrest and promised to change the use of mounted officers to transport arrested people, but it argued the officers did not have “malicious intent.” According to the Washington Post, the agency’s chief, Vernon Hale III also asked the Texas Rangers, which helps investigate incidents involving law enforcement in the state, to look into the incident. A second ongoing investigation is also being conducted by the Galveston Sheriff’s department, the results of that investigation have not yet been announced.

In its investigation, the Texas Rangers Division “determined that there was nothing that warranted a criminal investigation.” The division, which consulted with the local district attorney’s office, also said that the officers “had not violated the law,” in their arrest of Neely. Neely was later released on bond. The two officers were back working as of August 7.

Even so, the images, coming after years of heightened attention to the ways police officers treat people of color, raised questions about the officers’ behavior and the department’s practices. And the announcement that the officers won’t be criminally investigated has not lessened criticism of the department.

The department apologized, but critics argue that the officers must be held accountable

In a statement released on August 5, Hale apologized for creating an “unnecessary embarrassment” for Neely. In the statement, the department noted that it uses this type of arrest and transport method when it needs to control crowds, but that “the practice was not used correctly in this instance.”

“Although this is a trained technique and best practice in some scenarios, I believe our officers showed poor judgment in this instance and could have waited for a transport unit at the location of the arrest,” Hale said.

“We have immediately changed the policy to prevent the use of this technique and will review all mounted training and procedures for more appropriate methods,” he added.

But the department’s apology — and pledge that it would no longer use this practice — did not curb criticism. Critics argued that while changing the procedure was necessary, the officers who arrested and transported Neely needed to be disciplined or fired for the incident.

Neely’s family has also expressed outrage, saying that he is homeless and needs mental health treatment. “I believe the way they handled him was disgusting,” Melissa Morris, an attorney representing Neely’s family told Houston news outlet KPRC earlier in the month. “The family is offended. The family is upset.”

Many of these frustrations were on full display at an August 6 community town hall where Galveston residents voiced their anger over the incident. During that meeting, Hale said that he understood the outrage but supported his officers. “I know what the pictures show. I get it,” he said. “But we have to look at the totality of the circumstances. I also know what I have in these officers, in their hearts.”

Before the town hall, in an email to the Houston Chronicle, Houston NAACP president James Douglas said that the treatment of Neely was disrespectful to people of color. “This is 2019 and not 1819,” he said. “I am happy to know that Chief Vernon [Hale] issued an apology and indicated that the act showed poor judgment, but it also shows poor training.”

Others argued that while the practice itself was disturbing, the incident, which comes as police violence and use of force against communities of color remains an issue, also raises deeper questions about how the department interacts with black men and women more broadly.

“With the climate in the country today, I would hate to see, six months or three years down the road, what kind of judgment these same officers would make in a worse scenario,” Leon Phillips, the president of the Galveston Coalition for Justice, told the Chronicle.

“If it was a white man, he wouldn’t have been treated that way,” Phillips added in an August 6 interview with the New York Times. “I guarantee there’s nothing in their rules that you can put a leash on a guy while you ride down the street on a horse.”

With the announcement that the officers in the incident will not face a criminal investigation, Morris says that Neely’s family still wants to see body camera footage of the arrest. Morris also told the Washington Post that she wants to see the policy that Hale cited when defending the officers, saying that there may be a march in September if city officials and the police department do not respond to requests for more information about the horse-transport policy and how officers decided to use it.

“We do believe that the chief is trying to address the concerns of the community. We believe he’s acting in good faith,” Morris told the post on August 16. “But it’s good for everyone if they’re held accountable.”

The best-case and worst-case scenarios for Trump’s health care price transparency rule
Texas worked in secret with Trump officials to obstruct Biden’s immigration policy
Reading Roald Dahl’s Matilda as a queer classic
An expert on Trump’s threat to revoke clearances: it’ll “set back the entire security establishment”
The jarring contrast between Trump and Biden, in 3 moments from their competing town halls
“It’s not going to create or take away a single job”: Why Trump’s excuse on the Saudis doesn’t hold ...